Guess who turned four this week?  It sure wasn't me! Yes, my darling grandson Eli celebrated his big boy birthday. 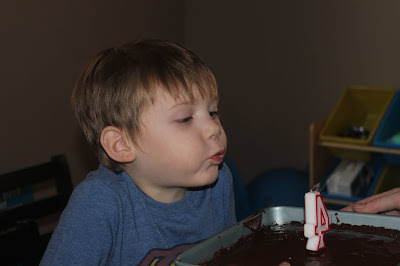 I drove out the day of his birthday and surprised him when his mom and I went to the school to pick him up.  He had a really big food day: French toast for breakfast, lunch from Dairy Queen, and later pasta and vegetables for supper followed by his birthday cake.

The cake is special, not only because he helped mix it up, but because it is a recipe of my mother's.  She called it a 1-2-3-4 cake, thus very fitting for this birthday.  Of course, I halved it because the recipe was too much...but he doesn't know that!

I spent the night and had company, as both cats Sheldon and Stanley decided the single bed was the place to be.  I didn't sleep particularly well, it wasn't the cats though, it was the sound of the trains from the nearby train yard.  Even so, neither Eli nor I were awake until nearly 6 a.m. After a few more cuddles and reading the book I gave him one more time, I headed home as I had an appointment later in the morning.

It was time for annual mammogram...and that's all I'll say about that. After my visit to the clinic I treated myself to a trip to the nearby dollar store.  I did come home with a couple of items, nothing exciting. 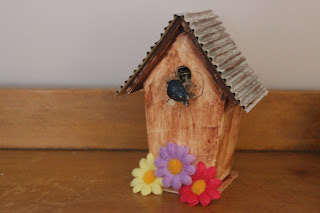 I did finish a couple of crafts this past weekend.  First up this little bird house.  It was from a run to a dollar store a few weeks ago, and meant for a child to paint...since my abilities in this realm are child-like I figured it would work for me.  Rather than paint it, I used acrylic paint as a stain.  The roof is corrugated cardboard that I painted using three colors to try to make it look a bit like a metal roof.  (Though it's difficult to see in this photo I even found a wee bird that fits on the little roost.) 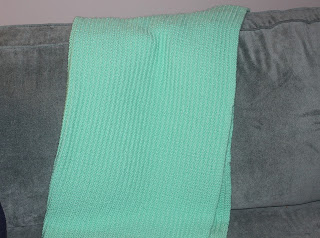 The other finish is the knitted blanket that I worked on during the Scotties last week.  I finished sewing in the ends and got it washed up. I like the look of it as it almost looks like corduroy.

I now have four baby blankets listed on our local Buy and Sell Varage sale.  I'm hopeful that someone will take an interest and noted this morning I have a watcher on each of them.  If they don't see in a couple of weeks, I'll probably try Facebook Marketplace.  At least for now, craft sales won't be happening for a while longer yet.  We did get good news this week, with the AstraZeneca vaccine now approved in Canada, but not for those 65 and over, our province is planning to provide them to those age 60-64 beginning March 22.  Fingers crossed that I'll get an appointment in April.

On Friday, I did my grocery shopping, going early in the morning to avoid crowds.  The Co-op had a good sale on meat - I got a small beef roast, stewing beef, ground pork and two packages of sausages.  Prices have really creeped up here over the last year!  I guess it is simple economics, more people are staying home and cooking meals so demand is likely increasing more quickly than the supply pushing prices higher.

On Friday evening, the men's Brier curling even started.  Like the women's, there are 18 teams in the event, including three wild cards.  Unlike the women's the three wild card teams are from three different provinces. I have absolutely no prediction as to who might win the event, the caliber of the teams is that good.  Well, most of them anyway - for the northern teams their winning percentage is generally lower as there are fewer teams and fewer events to play in.  Of course, I'll be cheering for our Saskatchewan team, who placed third last year.  I do know it will be a good week of curling!

Finally, a recent visitor to the birdfeeder.  The birds are still showing up each day but with warmer weather they aren't eating as much.  I don't know if you can see in this photo but the trees have wee buds on them. Spring is only a few weeks away...at least on the calendar. :) 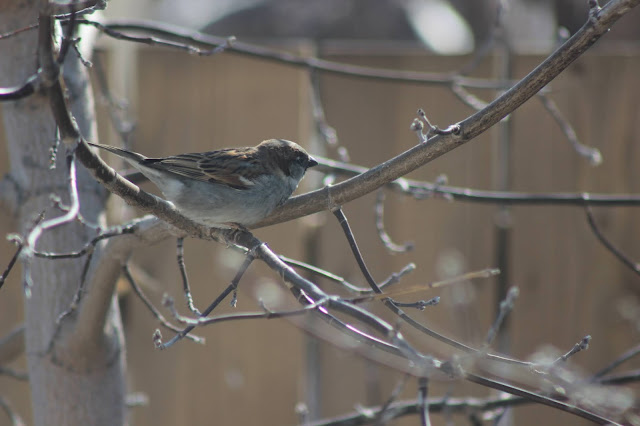 Take care everyone and stay well!

Posted by Maebeme at 12:36
Email ThisBlogThis!Share to TwitterShare to FacebookShare to Pinterest
Labels: bird, birthday, celebrate, cost of living, crafts, curling, grandson, spring on the way?