It was a good week - welcome to spring!

Back to regular programming. It has been an incredibly busy week and it seemed that Friday arrived before I even blinked. Before I get into the rest of the happenings, I'll mention that our Saskatchewan team came up one rock short and finished the Brier with a bronze medal, as they did last year.  They did us proud, and I know they'll be back to Brier again as they're still a young team.  The winner of the event was the Alberta team, skipped by Brendan Bottcher.  They've been the final four years in a row, and finally won the big game.  They'll be great ambassadors for Canada at the World's in a few weeks.

I finally Since there was no curling to watch, I got a bit of spring cleaning done.  It started with cabinets in the bathrooms.  Although I clean the rest of the bathrooms regularly the drawers and under the sink don't get cleared out very often.  My daughter called as I was doing the main bathroom - since some of the items were hers I was able to sort through and toss some old stuff.  I'm going to look for some peel and stick tiles as the linoleum that was put down 30 odd years ago when the house was built is beginning to pull up.  Note to self: Add to the to-do list.

In the kitchen I pulled out the fridge and stove to clean the sides and behind them.  Generally I do this job around November 1 and April 1, but I didn't think it got done in the fall, so was pleasantly surprised to see it wasn't as bad as I thought it might be.  Still picked up a small kitten of cat hair behind the fridge but none behind the stove.  The spills down the side of the stove were bad enough!  I'm not sure how that happens as the stove is a tight fit between the cupboards; I have to hold my mouth just right in order to put it back in place.

On Tuesday morning, I'd cleared out the pantry shelves and two lazy Susans of the contents, cleaned the shelves and replaced everything back in order.  I did an inventory of the lazy Susans because things tend to get lost in there.  Only two items had fallen off.  To reach these I have to lay on the floor, put my head and upper body in the cupboard, and stretch out my arm in order to reach the back of the cupboard.  I hate cleaning those cupboards.

As you already know, Tuesday afternoon was spent in line-up waiting for my vaccine.  Other than a little tenderness on Wednesday I had no reaction at all.  I feel for those (thinking of you Connie) who have bad reactions.  I wonder if one vaccine is more likely to cause a reaction than another?

I did get out walking twice this week, once on Monday and again on Wednesday.  I heard the geese fly over the house in the morning so had to check out the pond.  They're back!  We do have some geese that stay over winter as there is a bit of open water on the man made lake but I'm pretty certain these are returning from the south. 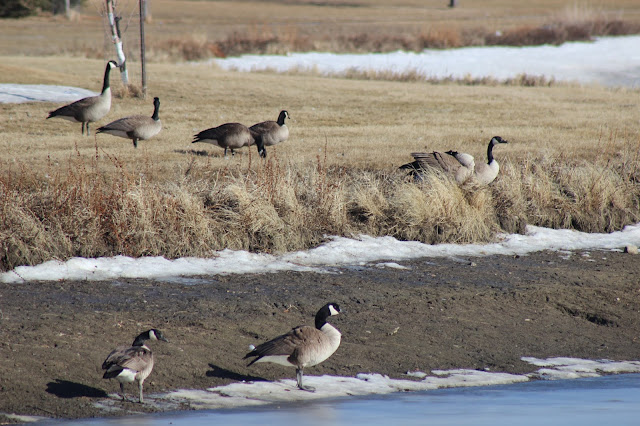 We had such beautiful weather much of the week.  The nights were cool, below freezing but the daytime temperatures were well above it most days.  Best of all we had lots of sunshine, which meant I could open up the sun room for the cats.  The rabbit seemed to be enjoying it too, as it gave itself a bath in the sun. 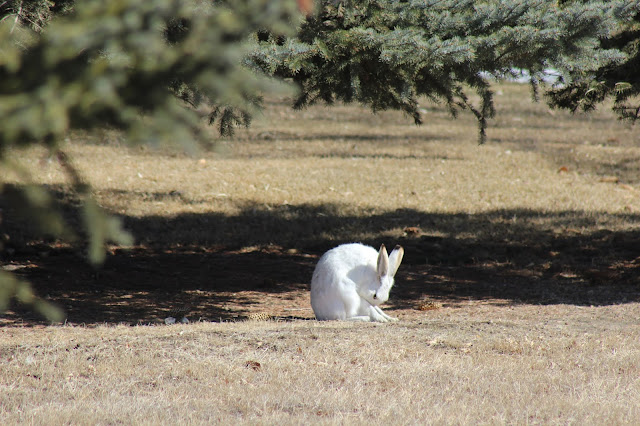 The creek, and of course the pond, are still frozen over but the snow is melting quickly. 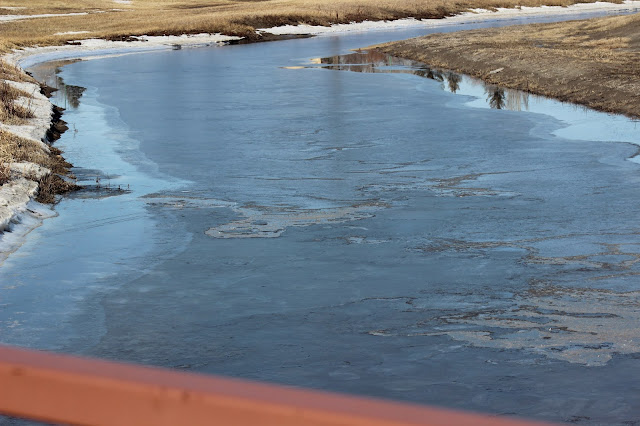 I chuckled at these two napping on the ice.  Close to mirror images of each other. 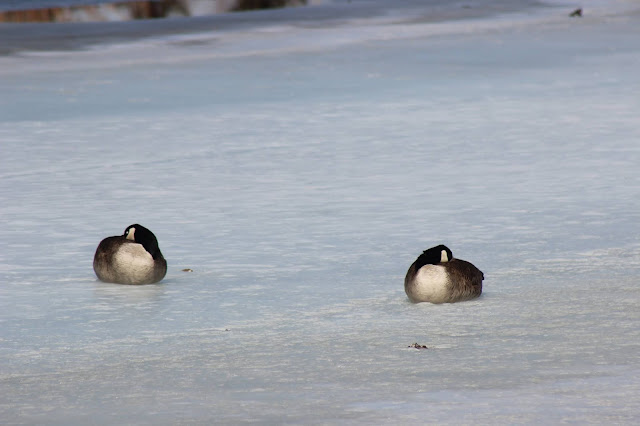 The mixed doubles curling started on Thursday and will run through to next Thursday.  It's a much different game than the regular four person team curling.  For starters, there are rocks set up at the beginning of the end (not thrown) and each duo throws a total of five rocks.  The first and fifth rock are thrown by the woman, the rest by the man on the team.  Rocks cannot be taken out of play before the third rock of the ten is played, until that point, the rocks that are thrown will be a freeze or a draw.  It means a LOT of rocks are in play so there can be big scores.  Also, there are only 8 ends versus 10 in the men's and women's games.  I quite enjoy watching because the strategy is quite different and I appreciate the fast pace of the game.  This is also an Olympic sport (now) and Canada has to win their place in another event even though we won the gold medal in the last winter Olympics. 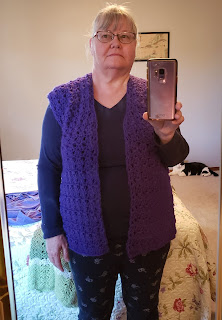 While I'm watching curling I worked on a couple of projects; a vest for myself and a cardigan for Eli. The vest I completed late on Friday.  It's made of a chunky yarn so far too warm to wear at the moment. I wanted something I could wear in the house when I feel a little chilled plus it helps use up some of the yarn stash I've built up over the last couple of years.  I still have some left that I can use to make a scarf.  The cardigan for Eli isn't moving as quickly, I should have the back finished today.

Spring/summer came early on Friday when it reached a high of 19C (66F).  There were records broken all over the province.  It won't last but, boy oh boy, it was fantastic even for a single day. Unfortunately my backyard seems to be flooding again this year likely because the ground beneath is still frozen solid.

This morning I had several visitors to the front yard. They all seemed happy to pose for a photo or two.  There were four in total - but I couldn't get a shot of all of them together. 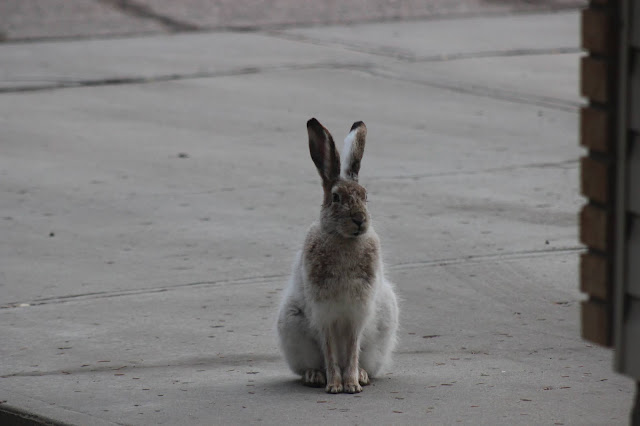 Note how much brown in showing on this one. 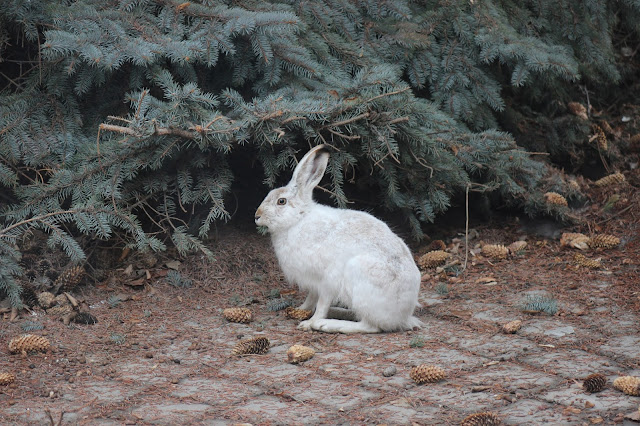 This one is still pretty white, and also smaller than the other one.  It's nibbling on my spruce tree. I can't imagine it tastes that great.

More curling today and I need to run out to pick up some fresh vegetables and a few other items.  That sums up the day ahead for me.

Take care everyone, have a great week ahead. Happy Spring!!