Fun in the sun!

The week started out quietly but ended with a whole lot of fun!  I did my regular grocery shopping, household chores, a bit of yard work and so forth completed by mid-week.  I had planned to mow Thursday morning, but the grass was wet and got even wetter when it began raining that morning.

I did get out for a walk on Tuesday, though I almost wished I hadn't by the time I got home.  When I left the house it at about 10 a.m., it was already 24C (75F) and it had risen to 27C(80F) by the time I arrived home about an hour later.  I hadn't taken any water with me and definitely needed some rehydration by that point.

It was an odd walk, even though I walked my regular route.  The photos tell the story. 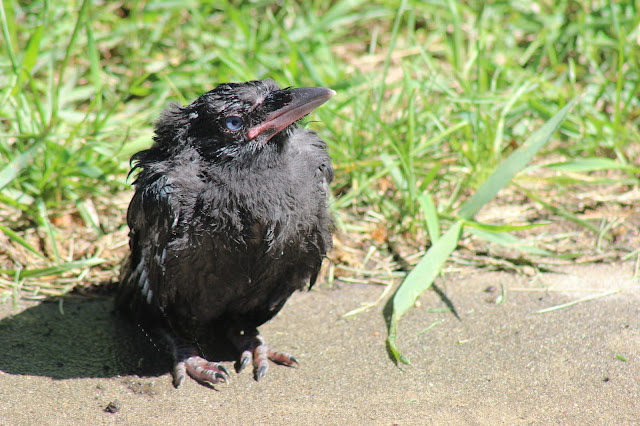 First up was this baby crow, that had fallen from the nest. It was off to the side of the path, wet from the sprinklers.  By the time I came back, it had dried off and was marching back and forth.  It's parents were close by and letting anyone who got close to back off.  That included me as well as a pair of Merlin hawks that were buzzing around.  I don't know what happened to it - hopefully the older crows were able to keep it safe from the predators.  (I don't know if crows actually have blue eyes or if this was a reflection of the sky.)

Okay, this was just weird. 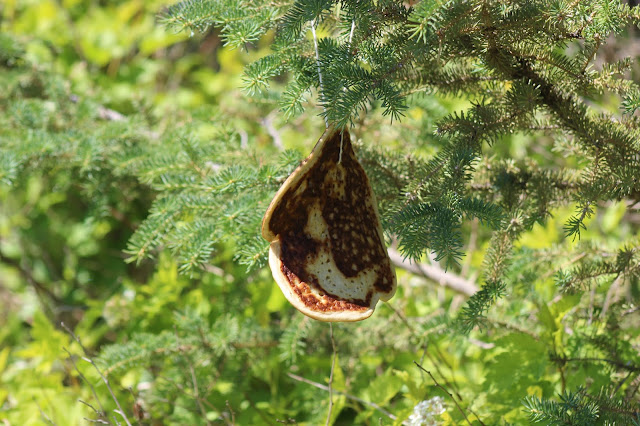 Someone had hung a pancake (slightly burnt on the other side) in one of the spruce trees off the path. I presume they were well intentioned, thinking the birds might eat it.  Who knows, maybe they did. 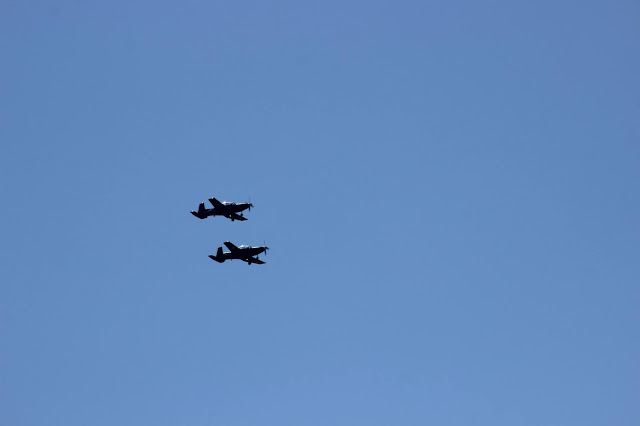 I heard the sound of aircraft high above and captured this photo of a pair flying in tandem. I suspect they belong to 15 Wing Moose Jaw, part of the RCAF.  I checked the information on line and believe these are two CT-156 Harvard II.  The base at Moose Jaw is home to the Snowbirds, Canada's air demonstration squadron.

At the creek, things were normal and I was thrilled to see three families of ducks. 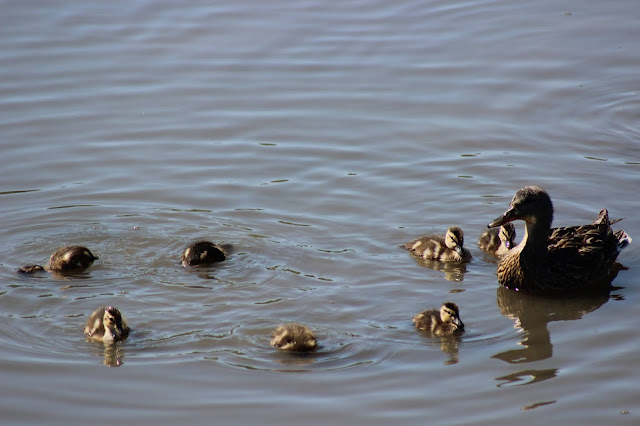 I took the path on the opposite side of the creek, hoping to catch a glimpse of the godwit or avocet, but saw neither. 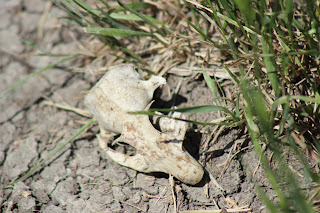 I've left this photo small but I presume you can enlarge it by clicking on it.  I believe this is a gopher skull.

Happily I saw a few more, like this one, watching me from the grass.  The city crew were out mowing the park but hadn't reached this area. 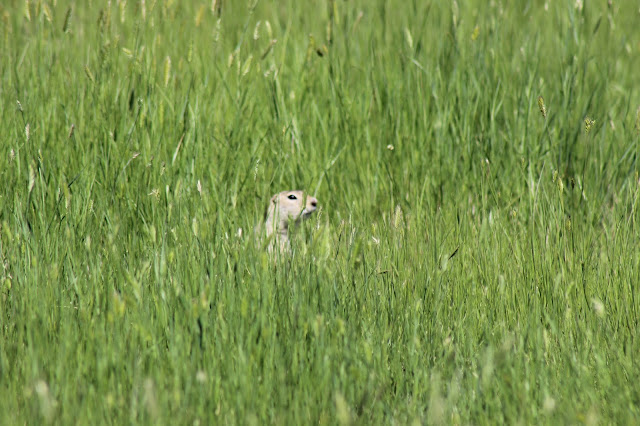 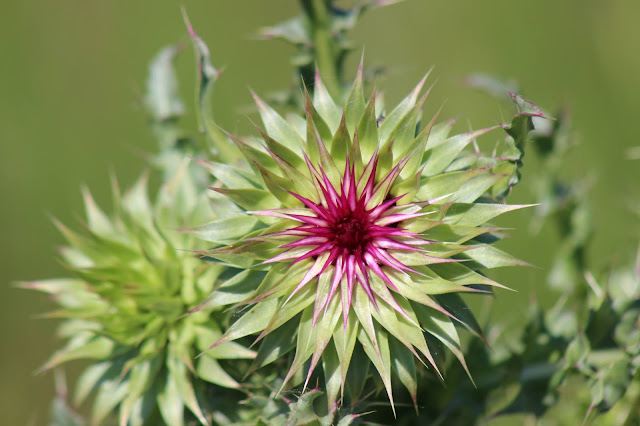 While this isn't really odd, it just impressed me with it shape and color.  It's a thistle of some sort, with a large purple flower.  They may be a weed but in the park they're simply beautiful. 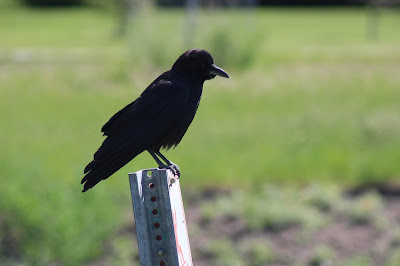 My second encounter with a crow happened near the end of the creek. I would have liked to get a front-on photo as it was resting on top of the warning - thin ice sign.  It didn't cooperate! 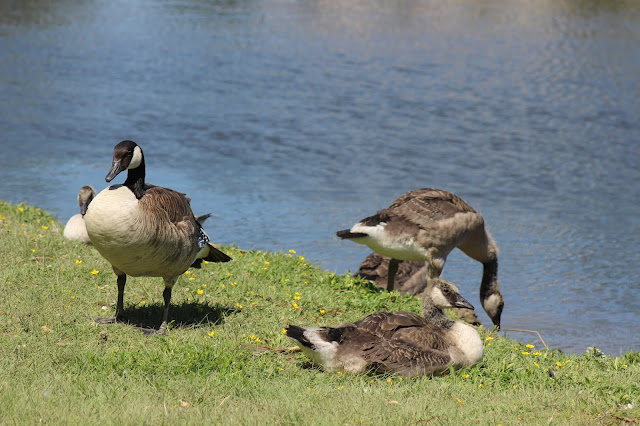 Over at the pond, the goslings continue to grow up quickly.  This one appears to be nearly fully grown, with just a bit of down remaining around the face.

Friday, I headed out of town early in the morning for a visit with D and Eli.  To quote Dr. Seuss, "oh the fun we will have".  Well, we certainly did. There were visits to the nearby park and spray pad, to the beach, lots and lots of playtime in the yard, and a brief shopping trip that resulted in the purchase of cupcakes too. 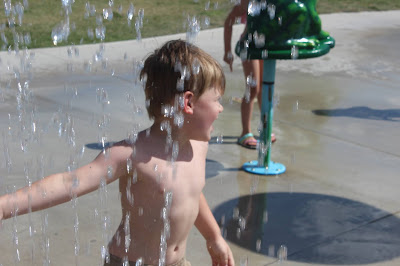 At one point, Eli was soaking wet, but I had forgotten to bring a towel with us.  He came running over to me and gave me a big hug, burrowing his face into my shirt.  I was nearly as soaked as he was! 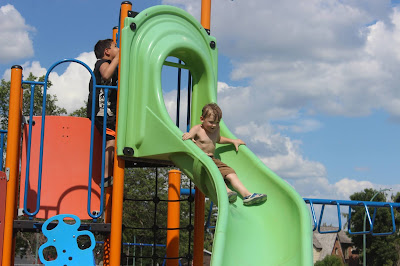 Before we left for home he went down the big slide and then we stopped at the swings to watch the city crew dealing with the damaged trees from the storm a few weeks ago.  As I pushed him on the swing he got quiet, so I asked what he was thinking about, "A rocket ship G'ma", he said.  We had quite the conversation about him wanting to build a rocket ship and go into space.

Saturday we were up early and outside doing yard work before heading for the beach.  The yard is large and requires a fair amount of maintenance that would daunt even someone who enjoys doing that work.  D got the lawn mowed, while I did some weeding.  Eli buzzed around the yard serenading us with the trumpet he found in the garage (where D had thought she had hidden it. :))

The beach was quiet when we arrived, just two other families besides ourselves.  Eli loves the water, though a bit tentative to begin with, he soon overcomes any trepidation and enjoys himself immensely. 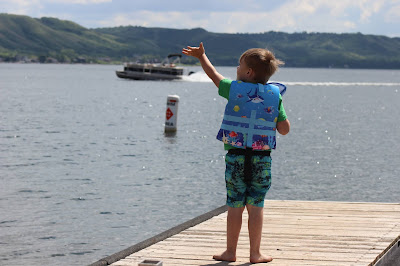 When the boats went by their wake would send waves into the beach.  We had some fun jumping the waves.  There was a couple of other children there for the first half-hour or so before they left.  Eli quite enjoyed their company and the three took turns on the slide. 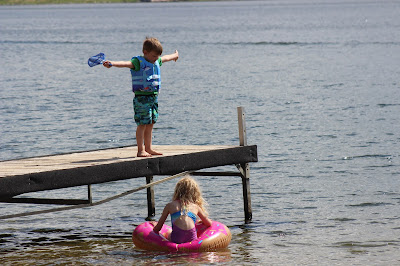 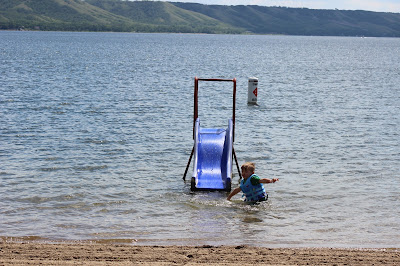 When they left the beach, he continued to slide on his own.  But he called to me to come out to help him off the slide. Not that he needed the help, he just wanted to splash me.  Stinker!

We left the beach when a family arrived with their dog in tow. Although there are signs that dogs are not permitted on the beach, the husband stood in front of the sign, read it, and then casually walked down to the water with the dog.  Sigh...perhaps we're just rule followers but this was a large dog and though leashed bowled over one of their children in its excitement.  My daughter was feeling quite anxious and there was no point in staying any longer.

On our way back to town, we spotted a young mule deer in the ditch.  It was feeding and although it raised it's head to look at us, it didn't seem bothered by the traffic passing by. No photo, since my camera was packed away.

It rained overnight, so the last bit of yard work I had planned to get done this morning had to be left.  But D and I got a few chores done in the house that aren't easy to accomplish on one's own with a four year old helper.  I left soon after these were done with a tinge of sadness - I do enjoy my time with the two of them though I do appreciate the quiet of my home.

I did make a brief stop on the highway on my way home.  You likely won't recall but I've stopped to take photos of this old house before.  Those photos were taken of the front of the house, which has been falling in.  Today's photos are of the rear of the house, which seems to have fared far better than the front. 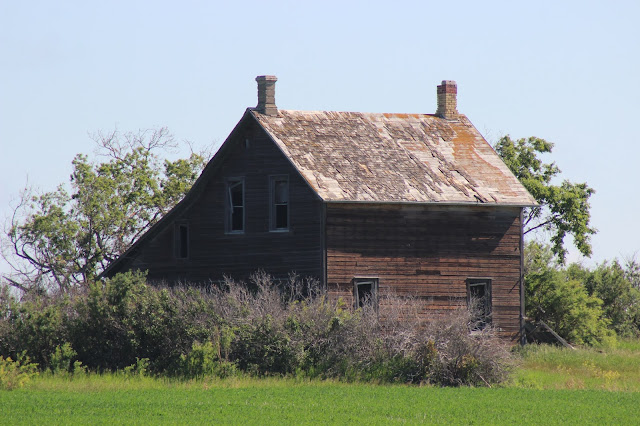 It must have been a lovely home at one time.  These bushes were likely planted as a hedge. 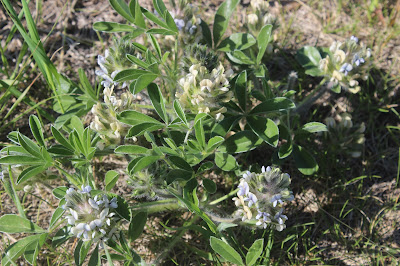 On the pathway I came across these wild flowers. I've no idea what they are.  But it amazes me how hardy these plants are - out in the hot sun, watered only when it rains, and never weeded.  Perhaps I've chosen the wrong plants for my perennial bed.
We're heading into a heat wave for the upcoming week.  Thankfully we won't be getting the high temperatures that British Columbia is experiencing; 35C (95F) on the island and 48C (118) in some places in the interior!  Even so, I'll be puttering in the yard in the mornings and spending the afternoons hiding in my air-conditioned house.  D sent me home with a project so I've got some sewing to do too.
Have a good week everyone!

Posted by Maebeme at 12:57
Email ThisBlogThis!Share to TwitterShare to FacebookShare to Pinterest
Labels: beach, grandson, having fun, visit, walk, weather