Another week bites the dust

Another week where time has simply gotten away from me.  Had I not kept track on my calendar, I'd have no idea what I've been up to this week.  I mean I do remember going for groceries at one point, doing some housework, some yard work, reading, watching television, going for a few walks.  Pretty much a normal and mundane week around here.

We've had some more heat early in the week, so the containers needed to be watered daily.  My tomatoes are starting to bloom. This has become a hot topic on a gardening group I follow on FB.  To pinch the first flowers or not? Some believe you'll have more fruit if the first flowers are removed, others say don't.  To be honest, I haven't a clue and I've never removed the flowers on the tomatoes I've grown in the past.  So I won't this time either.

I ran out to Costco to pick up cat food for D on Wednesday - the sale price was terrific and much cheaper than she can get in her small town.  While I was out, I went to Home Depot to pick up a few bags of dirt and a peony. I've been so very envious of the various blog and FB posts this spring but didn't think I really had a spot for one.  But then I had lightbulb moment!  There is corner of the lawn area in the back yard, where the sunroom and deck meet, that is very awkward to mow. I always end up using a pair of scissors to cut the portion I can't get at with the mower.  So the next morning I spent some time digging up the sod, adding fresh dirt and mixing it in with our not so wonderful clay soil, planting the peony and adding mulch.  Then I mowed and appreciated the changes I'd made.

This area is shady in the morning because of the spruce tree, but gets lots of sun as it faces south. I know I won't see blooms this year but maybe I'll be lucky and it will next year.

While I was out and about, I made a stop at both the Salvation Army and Value Village stores.  I picked up a couple of books by Sandra Brown (both mysteries) at S.A.  I did well at V.V. finding another pair of shoes and a bag of Lego for Eli, a t-shirt for myself, a candy jar, and a board to use for a sign for D.

I had picked up the stencil at the $ store, so it was a simple process to add the stickers.  On the back I've attached a couple of picture hangers as the board is pretty heavy - we'll just have to put in a couple of nails in the wall to hang it from in her laundry area.

I did manage to walk several days this week but I didn't have the camera with me until Friday.  It was cool and overcast when I started out but the sun made itself known occasionally.  The breeze was nice as it kept the mosquitos (mostly) at bay. 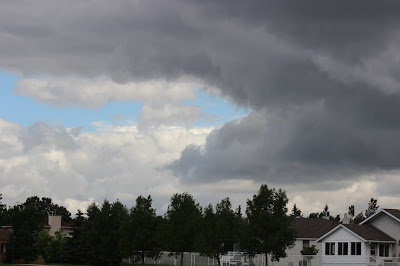 My maternal grandmother used to say it wouldn't rain if there was enough blue sky to make a Dutch boy's pants.  Apparently this was enough because I did not get rained on. 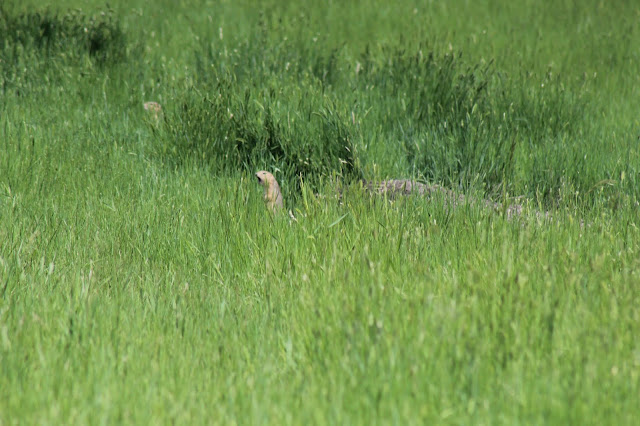 The gophers weren't the least bit shy this day.  I saw a least a half dozen of the critters.  This one appeared to be yelling to its buddies. :)

The wildflowers are blooming and some of the grasses are heading out. 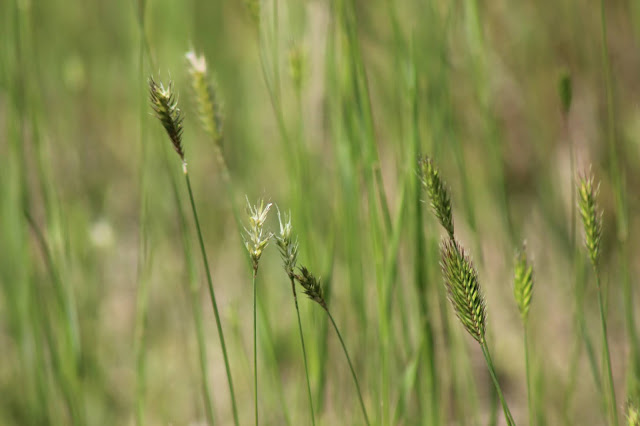 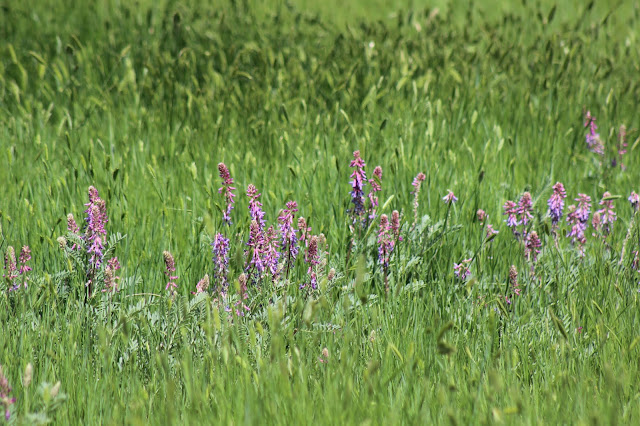 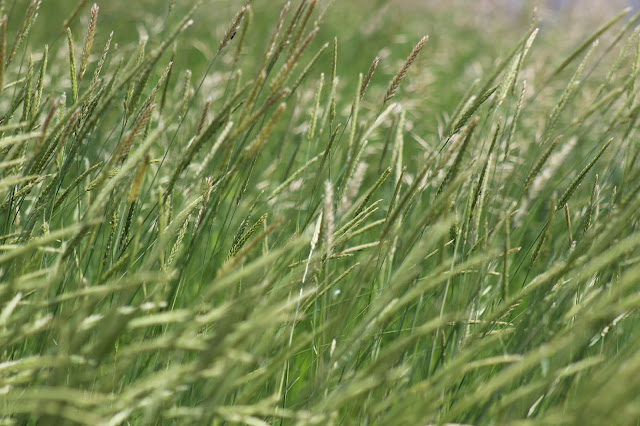 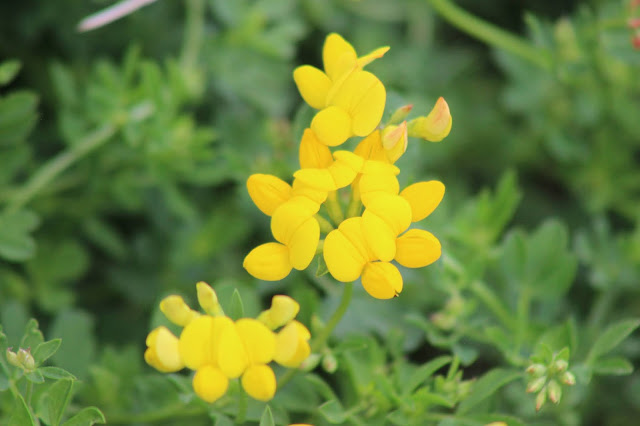 I've no idea what any of these are, but they sure are pretty.

During my walk, I saw the Avocet pair - I'm still hopeful they have had young ones though I've not seen them.  But more exciting (to me at least) was spotting the Killdeer.  There was a pair nesting last year at the creek and it would appear they are back. 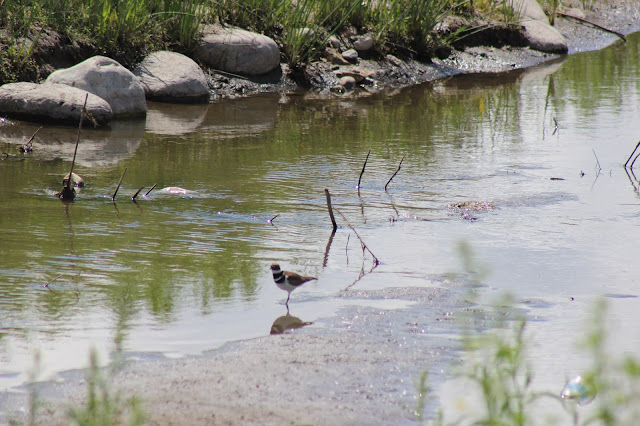 Over at the pond, most of the birds were on the opposite bank, until I reached the far end.  There were three pelicans, one grooming itself and these two coming in for a landing. 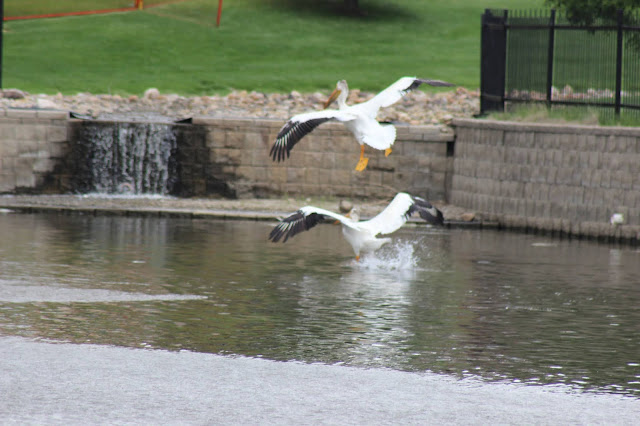 I've only seen the cormorant once this spring.  The water level was very high so the spot where it often sat (some sort of a pipe) was underwater.  It isn't now, but I have to wonder with fewer goslings and ducklings this year if it found another area to feed. There certainly aren't fish in this pond, yet last year the cormorants were around most of the summer.

Speaking of goslings, they are growing up quickly. While there are some more recent youngsters, this group are rapidly approaching adulthood.  Teenagers perhaps? 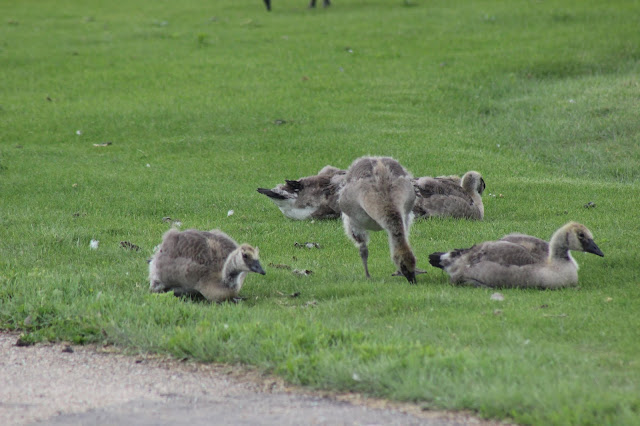 Today, we started out sunny but it is clouding over as the day goes on.  We may get some rain this afternoon but the possibility is still low.  I should have gone out and weeded the side yard this morning but instead I've been sweeping and washing floors, cleaning toilets, interspersed with reading blogs and FB, doing some Sudoku and crosswords, and putting things back where they belong. It isn't the most efficient way to get things done but it seems to work for me.
On that note, I'll wrap up this week's post. I'm sure you're all bored by now. Have a great week everyone!
Posted by Maebeme at 11:05
Email ThisBlogThis!Share to TwitterShare to FacebookShare to Pinterest
Labels: crafts, walk, weather, wild flowers, wildlife