There were a couple of comments on my last post  about the origin of the saying my grandmother used: "enough blue sky to make a Dutch boy's pants".

Curiosity led me to do a bit of research on the origin of the saying (or old saw* as I learned).  It comes from nautical lore: when there is enough blue sky to patch a Dutchman's breeches, expect clearing weather. (Old Farmer's Almanac).

Another site suggested that "sailors traditionally wore wide trousers, and Dutchmen traditionally wore even bigger ones, which in addition were blue."  Thus to make a pair of these pants, one would need to see quite a large patch of blue sky amidst the clouds.

In some cases, the saying was changed to enough blue sky to patch a pair of pants.  Perhaps that was meant to be more optimistic.  Yet another article suggested that the blue sky had to be seen before 11 in the morning for the afternoon weather to improve.

The search results also brought up several references to Dutchman's Breeches, (Dicentra cucullaria) a herbaceous perennial in the poppy family.  I was surprised to learn that another name for it is Bleeding Heart.  It certainly doesn't look like the bleeding heart I'm familiar with. 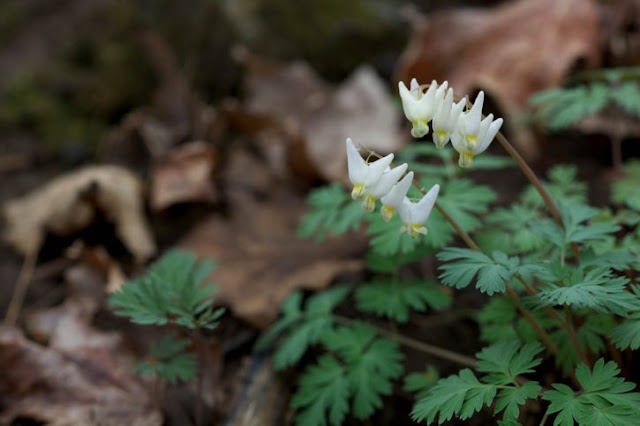 According to the U.S. Forest Service, this native wildflower grows primarily in the eastern United States, as well as the Pacific Northwest.  Reading that, made me curious so I googled Dutchman's Breeches and Canada, discovering this plant is also found in the Eastern provinces of Canada.

At the end of it all, I still don't know how much blue sky is needed to make (or patch) a Dutch boy's pants.  But on overcast days I'll keep looking for those holes.

I'm curious too, is there a saying (or sayings) that you use that have their origins in the past?  One that springs to mind from my mom was, you have to eat a peck of dirt before your die.  I don't know where it came from...so that's a post for another day.

*A proverb or maxim, as in Mom's always repeating the old saw, “Haste makes waste.” This term uses saw in the sense of “saying,” and old in the sense of “wise” rather than old-fashioned. [Second half of 1400s] Dictionary.com

Posted by Maebeme at 10:28
Email ThisBlogThis!Share to TwitterShare to FacebookShare to Pinterest
Labels: curiosity