Going up and growing up

It has been a hot one this week.  Our temperatures started rising on Tuesday reaching 30C/86F plus and have continued to stay high, even overnight for the rest of this week.  The highest temp was reached on Thursday at 36C/97F.  Those are July temperatures around here!  By Sunday we'll be back to more normal temperatures in the 22-25C/71-77F range.  I won't lie, I'm looking forward to it.  These few days the house has not cooled down overnight and I've had to run the a/c to keep it reasonably cool.

As a result, I spent more time indoors than out this week.  Outside chores were dealt with early in the morning, I would have my tea out on the back deck or front patio, and then head back inside.  The indoor chores have been ticked off my list, some of which have been neglected for some time.  Good thing, as I expect most of next week I'll be heading back outdoors.

I did get out for a walk early on Tuesday morning.  Here are a few of the photos from that walk:

I had walked over and beyond the creek to take the dirt path back to main road.  Most people stay on the pavement and it was fairly busy at the time - this let me stay out of their way. 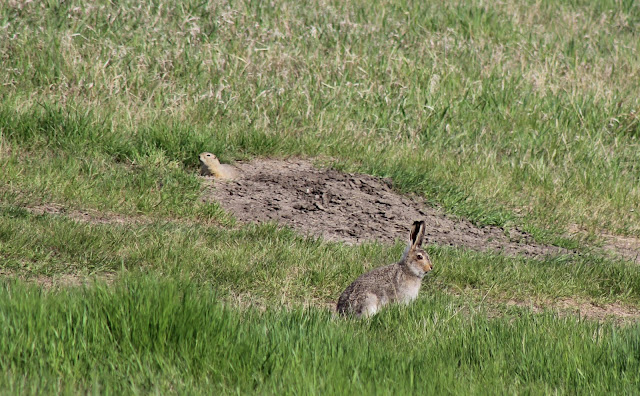 Check out the photo bomber in the back.  I cropped this photo as I hadn't seen the gopher when I took the picture of the hare and didn't see it until I got home and was reviewing the shots.  It's funny because I kept hearing them call to one another as I walked - there are lots of gophers holes on that side of the creek and I kept wishing I'd catch sight of one.  Little did I know I already had. :) 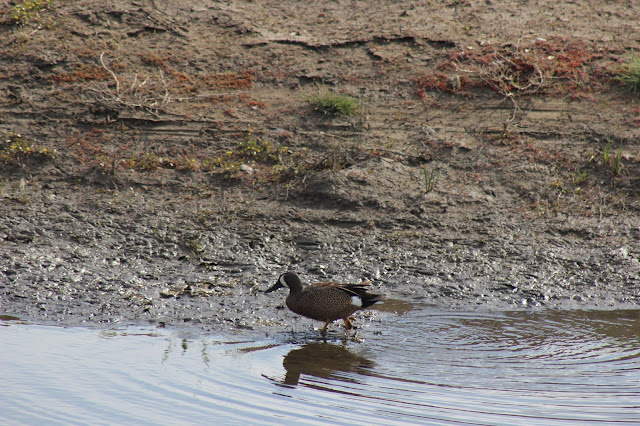 The creek water is still quite low but there were a few ducks and geese about.  This one was new to me and after a check of the ducks of Saskatchewan, I believe it is a blue winged teal. The blue is supposedly in the color of the head, though the lighting wasn't right to check, but this duck does has the distinctive white band on the head, black bill and speckled belly.  There was a female nesting down the creek a ways, that likely was it's mate but I didn't want to disturb her so passed on by. 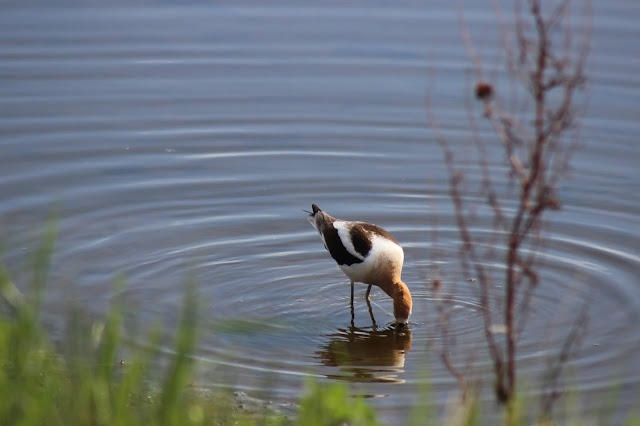 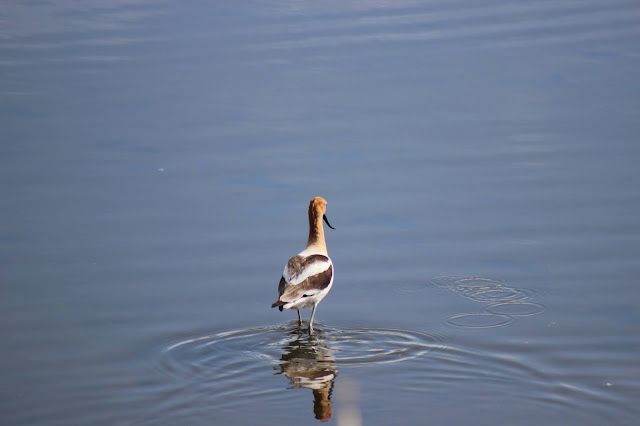 The avocet was busy feeding along the edge of the creek. They are such pretty birds! It's likely that the mate was nearby but, if so, she was well hidden. Nor did I see the marbled godwit this time, perhaps they've found another spot to nest this year. 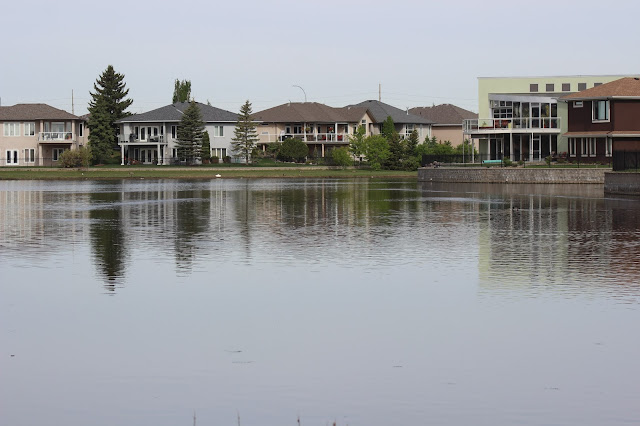 I didn't get many photos at the pond because it was pretty quiet.  (The white blob in the grass at the far side is the single pelican).  I only saw the one family of geese, these ones were older than the group from last week.  I have to assume the others were on the far end of the pond or in the grass somewhere.  While I was walking there was a man checking around the trees, for what I'm not certain, but I was worried he was looking for nests.  There were reports last year someone was destroying nests and this year there have been far fewer goslings than I remember in the past.  I know geese make a mess but that is just cruel! I stuck around and tried to keep on eye on what he was up to but was never close enough to confirm what his purpose was.
On Friday morning, I hazarded the heat to go out to a few garage sales.  The rules are: all items must be outside the garage on the driveway and masking is recommended.  Well, there seemed to be a lot of people who were not following the rules.  At the one sale, I did go into the garage because the folks running it were outside of the garage and I was the only one inside.  However, I was the only one with a mask on there and at most of the sales I dropped into.  I picked up two shirts, a pair of jeans, and a hoodie for Eli for $12.  The first few items will fit this fall, the last not for a year or two.  That was all I was able to find - while there were some lovely items, there was nothing I really needed.  I did stop at the Salvation Army store too, and had better luck there finding a few books for myself, a pair of Keen's sandals for Eli for $4, and a cute little decorative watering can. I have a plan for the latter that I'll show you later. On the way home I stopped at a couple of garden centers for some lawn soil, more grass seed, a couple of small basil plants to add to my tomato containers, another pack of impatiens and some alyssum.  I lost a couple of impatiens - to the heat maybe, damaged during transplant, likely.
This morning, I got the new plants transplanted and the containers watered, and washed windows in the screen door and garage door before I sat down with my tea and my book.  For not having read for much of year, I've finished three books in the past few weeks! Two of them I enjoyed a great deal, the third I wish I'd passed on.  But I kept thinking the story would get better, it didn't, and the ending just left the reader hanging.
It's heating up outdoors so I'm inside with a few things to accomplish this morning before I settle in with another book or maybe my crocheting.  Before I came in, I wandered the yard and took a few photos. 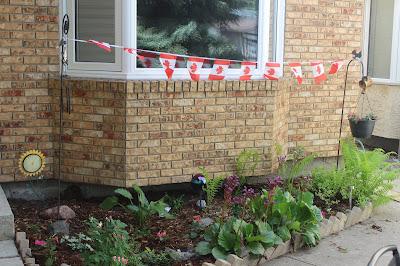 The front flower bed is almost completely in the shade, just gets a brief bit of sun late in the day. My hostas are starting to come up (the new one is quite large), and the annuals will fill in some spots.  My ferns are going crazy though - I've got seven now and they are making their way across the bed.  The Canadian flag banner is there, as I attempt to keep the birds from hitting the window.  I've had a few bounce off the window but so far no deaths this year in the front.  Sigh, the back sun room is another story. 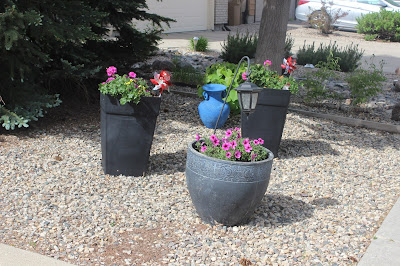 Out in front, I've stuck to my habit of filling the two tall containers with the contents of hanging baskets I've purchased.  I've added an ivy to each as well.  The round pot contains the petunias, and this year I added a trailing verbena. 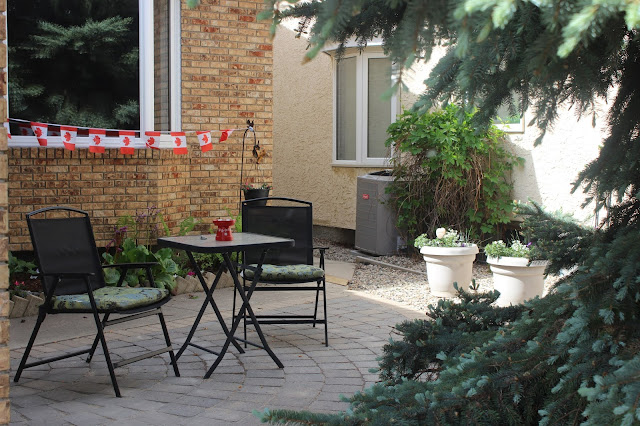 Looking onto the patio from the driveway.  The neighbour's vine is filling in and soon I'll only hear the noise of the a/c as it runs. It's a lovely private area where I sit to read in the morning. 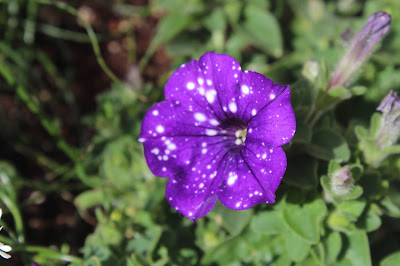 I fell in love with these speckled petunias.  They are in containers off the patio, along with verbena, curly grass, calibrochoa, and another plant, whose name I can't recall.  When the planter fills in, I'll be sure to share a photo. 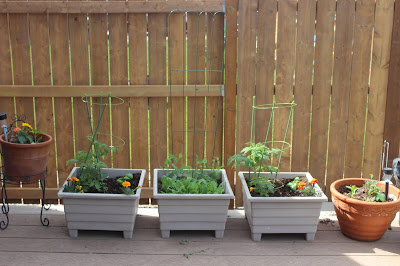 In the back yard on the lower deck, where it gets the most sun, I have my vegetable containers. The clay pots have peppers, along with marigolds and lantana, while two of the square containers have tomatoes, basil, and marigolds.  The center container has radishes and peas.  The peas are tall enough now to start winding their way up the trellis.  Out of sight to the right is a container of lettuce with sweet peas.  The latter are taking their time, but I'm hopeful they'll filling the trellis on that side as well. 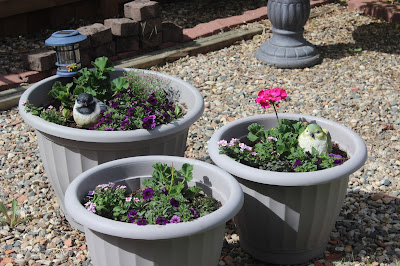 These are the three new pots this year, and they are in the area where the shed once stood.  I've been moving them around as I'm digging up the gravel in this space. The bricks in back I'd pulled up from one area of the yard and plan to get rid of as I want to put in more grass...it's a process. 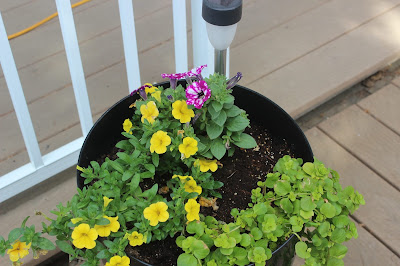 These are the deck planters.  They get sun early morning, and then most of the afternoon. (I have a large spruce in the back that shades the deck mid-morning  and the sun room shades it later in the day.  The calibrochoa are already growing like made, as are the creeping jenny.
Finally, one last photo that makes me smile.  The pansies are just outside the front door. They are the first plants I put in this year, and their sunny little faces always make me happy. 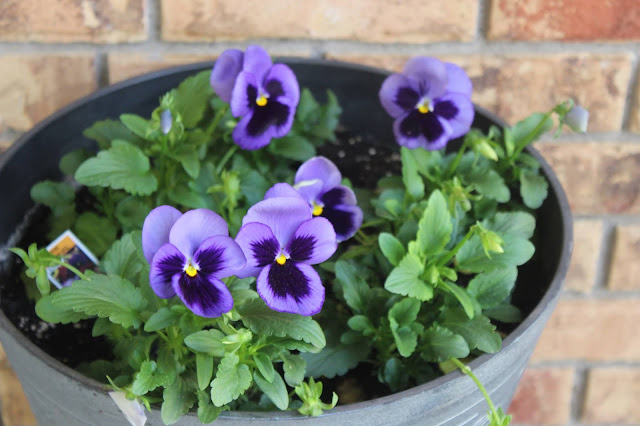 It's been a good week, especially for the garden.  A little rain would be nice and there may be some in the forecast later in this upcoming week.  In the meantime I'm enjoying my time outdoors when I can, and catching up on inside chores when it's just too warm for me.
Have a wonderful weekend everyone!