Outside my comfort zone

As most of you know, I'm pretty much a homebody. I'm generally quite content to be at home puttering around, doing housework, crafting, reading, watching television, etc.  This week has taken me out of my comfort zone for a good portion of the time.
I did have a lovely visit with C on Saturday.  I had forgotten (I'm a bad friend) that C isn't able to walk long distances.  She had a serious accident when she was a teenager and broke her back.  We did walk for about 15 minutes in the park, then sat on a bench for a good half hour or better before walking back to the car.  It was overcast and threatening rain but cleared while we were visiting. 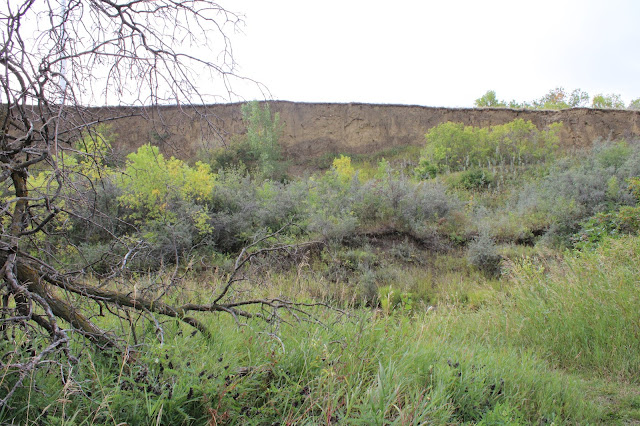 This was our view from the bench. 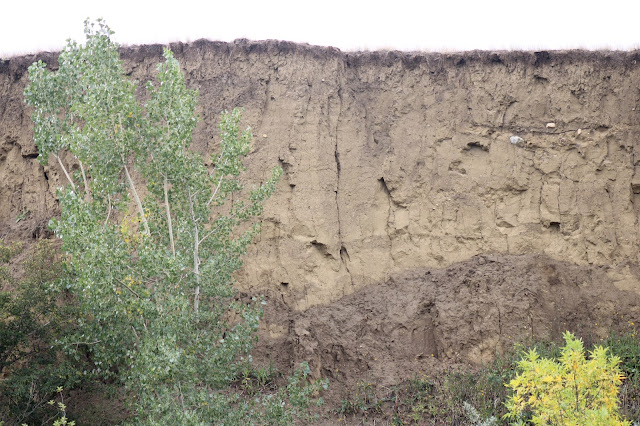 I was quite fascinated by the sheer wall of the bank on the other side of the river. 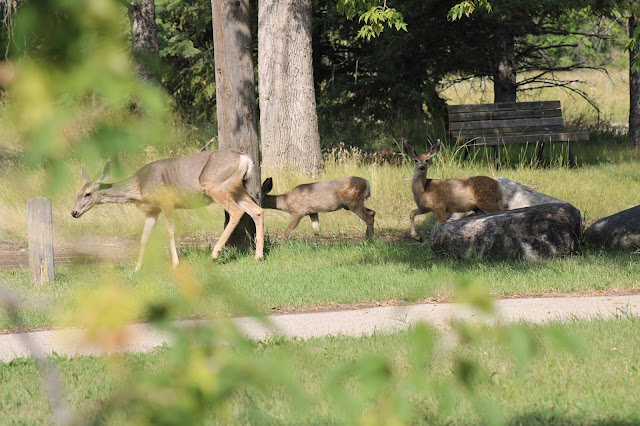 On the way back to the car, we spotted this mama deer with three fawns.  The third was trailing behind the others.  The mother appears to be quite thin, as her ribs are showing. 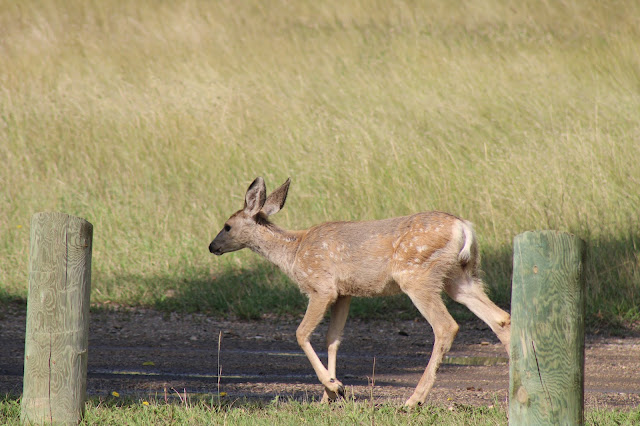 Still showing some spots but they're fading rapidly.
After the park we headed for a Tim Horton's coffee shop where we sat out on the patio and enjoyed a coffee for her, tea for me, and muffins for both.  We caught on all the happenings from over the past couple of years and have agreed we need to get together again soon.
On Sunday morning, I headed to the campaign office of a local candidate for the federal election.  I'd volunteered to deliver pamphlets for drop off in household mailboxes.  It took me eight hours over three days to deliver the handouts.  While I was in the office, I was asked if I would go door knocking with the candidate on Friday evening.  I agreed, on the basis, that I wouldn't be asked to say anything.  I was there for moral support and to hold the pamphlets only.  While I was out delivering, I only had three people give me a hard time (or at least try to), but I didn't actually have to talk to too many people.
Tuesday evening, we had several storms move through the city with lots of thunder and lightning and hail too.  The north end of the city was hit hard and I've seen photos and video of gardens that were decimated.  Sad, because our growing season is so short and we're so close to harvest. 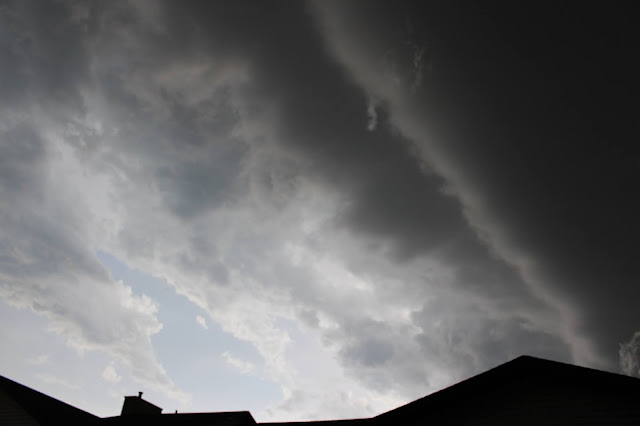 I went out as the storm was approaching and took a few photos.  As it got closer, it started to sound like a train because it was raining so hard. 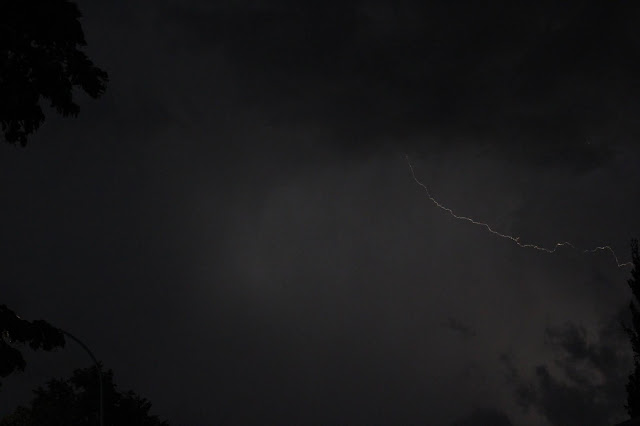 The sky got so dark so quickly, and after this shot I headed indoors.  Just in time, too, as the rain and hail started immediately.
I headed out to the back yard early Wednesday morning to check on the plants.  It was a relief to see that there was very little damage.  One of my nicotiana plants had broken off at the stem, but the tomatoes and peppers appeared fine.  I could hear thunder in the distance and a few minutes later, this happened:
Thankfully this storm didn't do any real damage either. I had planned to spend the day outside doing yardwork.  A lot of the perennials are done flowering and dying back so need to be trimmed.  The annual containers need trimming too especially the petunias as they are getting too leggy.
Since I couldn't be outdoors I gave myself permission to have a lazy day.  I'd walked just over 63,000 steps from Sunday through Tuesday.  I'd fallen once on my travels, banging my knee which bruised but it didn't swell so I kept going. What I didn't immediately realize, and only learned the following morning, was I had pulled a muscle in my back as well.  The knee is fine now, but my back is still giving me some grief.  It's the weirdest things that bother me. Turning over in bed, turning to get out of the car, pulling up my jeans, using a knife to cut through something,  and even a tight hug from my son all have me yelping in pain. Thankfully, it hasn't been bad enough that I've needed any pain meds.
I had planned to get out in the yard on Thursday after a grocery run, but by the time I was home and had things put away, I was ready to rest.  So instead I finished a book, Catherine Coulter's Blind Side.  It was just an okay book, though I'll admit I enjoyed the beginning more than the end.  The only other thing I'll say is it is apparently hard to kill some people.  When that was finished, I started a to-do list of assorted items to complete around the house.  One of those items was to go through the pantry and choose some things for a Foodbank Drive.  Every fall the Scouts and Girl Guides do a drive and though I'm not certain when it will be, I figured I'd tidy the pantry and pull things we probably won't use.  Do you ever find yourself buying something new and then never use it?  Mea culpa.  I found several cans of soup, a few cans of tomato sauce, two extra bottles of ketchup (who needs 4 bottles of ketchup?), and two boxes of the powdered mashed potatoes.  I do use the scalloped potatoes, but have never tried the mashed - and it isn't something I think I'd like.  With the scalloped I always add a couple more real potatoes...as if that makes it more homemade.  Well, it certainly makes it less wet.  Those two bags are in the garage and will stay there until someone picks it up or until I get tired of it and deliver it to the foodbank myself.
Yesterday, I kept busy in the morning in the kitchen.  I used the first batch of tomatoes to make tomato paste (I have enough cans of tomato sauce in my pantry).  It's a slow process since the tomatoes have to be cooked at a very low temperature but, oh my, does it taste good.  While that was cooking, I cut up strawberries and green pepper and bagged these for the freezer.  I also had a container of spinach to deal with - I froze some for spinach dip, and used the rest to make a cream of spinach and cauliflower soup. The cauliflower was from the freezer, that I had blanched and frozen earlier this spring.  Then I went out and picked the remaining tomatoes and peppers.  While we have no frost forecast in the immediate future, the plants are dying back and I'm ready to quit watering them.
We spent almost three hours on Friday evening, door-knocking.  It all went well, though being a Friday before a long weekend, we missed a lot of people.  Those that were home were receptive for the most part, and only one advised us to move along.  Politely, but firmly.  I don't know that I would do it again, but have agreed to do another info drop in a week or so.  It did allow me to get to know my candidate, to hear him respond to questions and concerns, and get his perspective on the issues.
Today, I'm taking it easy again.  I'm still experiencing some pain from my back.  It should be lovely and warm this afternoon, so I'll head outdoors at some point to read. And if, I'm feeling up to it I'll get some deadheading and pruning done, and pull the remaining pepper and tomato plants.
Have a good weekend everyone!