And just like that, it's over. The presents have been opened, the food has been eaten (or most of it), the cuddles and kisses have been shared, and the house is quiet once more. Saku, the cat, is quite pleased to have it so. I'm a little sad but we had nearly 3 inches of fresh snow yesterday and now the temperatures are plummeting so I'm happy D and Eli went home yesterday ahead of the storm.

We had a lovely couple of days. D and Eli arrived here about 9:30 a.m. Christmas Eve. She left him with me while she and friend did some shopping. He and I were having our lunch when she arrived back at the house. About 1 p.m. we left to drive out to the farm to visit with my brother and his family. Oh, what fun we had!

Their son, my nephew K has two dogs, Whistler and Rider, while R and P have a German shepherd Cola, and two cats, Callie and Kelfie. We had assumed Eli would be afraid of the dogs, and they of him, but it turned out that Whistler thought he was the greatest toy. The two played together and tussled both indoors and out. In the photo Eli was rolling down the hill and Whistler came to protect him (I think). I just know they were both having fun by the giggles from Eli.

Their house is a three story stone house built in or about 1906. K took Eli up the stairs and showed him the back and front stairs leading to the third floor. He spent the next twenty to thirty minutes grabbing one of us by the hand to show us the secret passages. The only space he didn't discover was the basement and he thought that was creepy. He's right, it is! :)

My niece L, made up a plate of baked Camembert, pomegranate and honey for all to share while we visited. Later after a walk in the snow down to the barn to visit the horses and donkey, followed by a short walk on the trail to the renovated shed (moved from my back yard), we all headed back indoors for hot cocoa and shared some of the baking I'd brought for them. (Sorry no photos of the horses Kim - we were too busy feeding them carrots).

On our way back into the city we were stopped by a train. I asked D to text her brother to pre-heat the oven. There was a reason why I prepped that morning, it just needed to be reheated when we arrived home. By 8 p.m., other than my son, the rest of us were tucked up in our beds. I read for a bit but the lights were out not long after.

Christmas morning arrived early, but not as early as I'd initially thought it might.  I heard D and Eli moving around the bedroom, and it wasn't long before the little guy was skipping down the hallway saying "good morning Grandma." He watched some cartoons before his mother gave him his stocking to open. Silly girl, she'd forgotten the bag of items for his stocking at home, but there were a couple of items that she'd had shipped here (for some reason Amazon wouldn't ship crayons to her small town - weird!), I had a book tucked away, some candy canes, and she looted a gift bag her friend had given her for Eli that had gummy candy. It was enough.

The two of us made breakfast, bacon and French toast, and the three of us sat at the table to enjoy our breakfast together. My son C is a late riser, but we sent Eli down to wake his uncle about 9:30. After C got his coffee and had a smoke in the garage it was finally time to open our gifts. I was the designated "Santa" with my little helper. I'd read the tags and he'd take the gift to the recipient or in his case, sit down to open the present. Eli had, as always quite the haul. 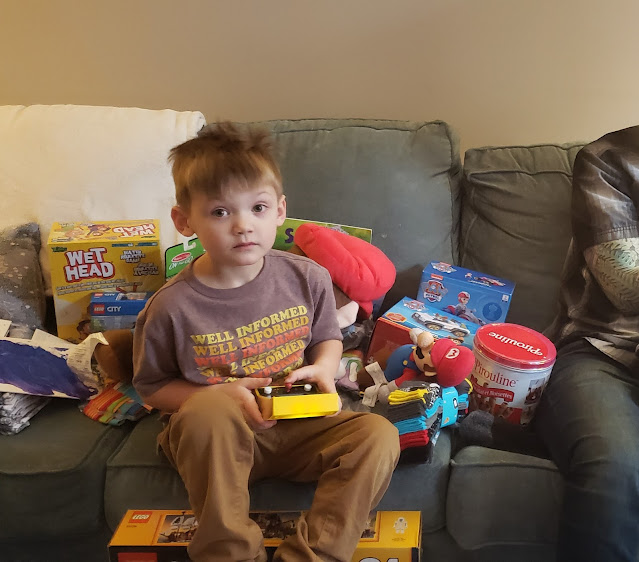 The cookies to his left are his uncle's but the two shared some. Eli is playing a PacMan game - what is old is new again. 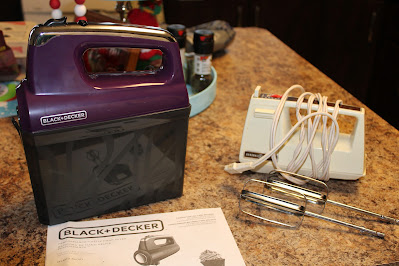 Speaking of which, here is one of my gifts from my children. The new hand mixer has it's own carrying case that hold the attachments, including dough hooks, beaters, and a whisk. The old one, it's meant to replace, is about 40 years old (maybe more), and the cord tends to pull out of the connector to the mixer. I was teasing my daughter because the Black and Decker comes with a 3 year warranty so I told her I'd keep the old one as a back-up. :)

After our Christmas brunch, I got the chicken into the crock pot. I used a recipe from Allrecipes.com for slow cooked chicken and stuffing. I would do it again but reduce the amount of liquid. We took as much of the stuffing out of the pot just before serving and fried it up in a pan with some butter before adding it to another batch of stove top stuffing. It was just too wet otherwise. But the meal was great and we enjoyed some time just chatting about Christmas's past. My children are 6 years apart in age, and I learned they have very different memories. It shouldn't surprise me but some things really did.

Before D and Eli left on Boxing Day morning, the three of us made a trip to Walmart, where she picked up a new television at a very reasonable price. Her old plasma television, that she bought for $50 is scratched and colored on, is well past it's prime. She uses a firestick to access programming. This Roku Smart television will make her access easier and more reliable when I deliver it later this month...her vehicle was too full to take it home!

We definitely had a fun filled couple of days. Once they were on their way, I simply relaxed, watched a bit of television, started a new book, and later caught the Canada-Czech junior hockey game. Today is soon enough to start the housework again.

I hope everyone reading had a nice Christmas, celebrated as you prefer it to be, and with time to relax.