Dealing with winter, dreaming of the beach

The snow started falling on Sunday morning, and by mid-afternoon we had a fresh fall of 3 to 4 inches. I was watching football when I noticed it had stopped, so headed out at half time to clear the driveway. I wanted to get it done because the forecast was for clear and cold weather on Monday. AND that's what we got. -26C/-15F when I woke up that morning. Thankfully the forecast was for temperatures closer to freezing by Wednesday.

With the cold weather I wished I were anywhere but here. A friend just returned from a trip to Puerto Plata in the Dominican Republic last week and I kept thinking of the sand and the ocean she experienced there. I headed into my photo files and spent some time looking at memories from past visits to my favorite beach; Reduit beach on St. Lucia. 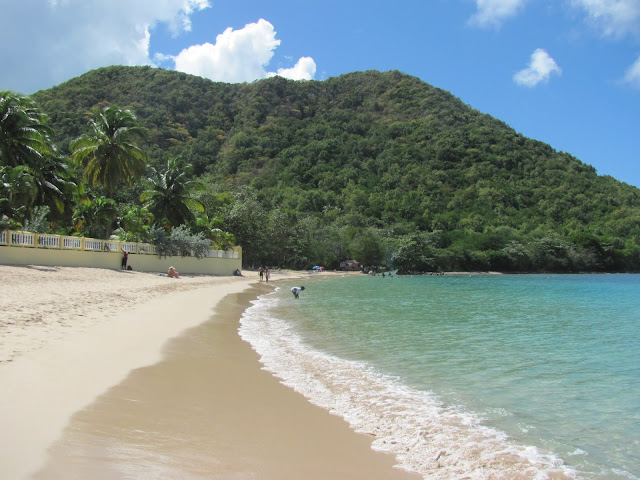 Isn't the beach and scenery beautiful? This photo is at the end of beach, beyond the more touristy area. The locals come to swim here, along with some tourists like myself. I've had the privilege of visiting this area three times, and I'd gladly visit again.

Monday was a day to catch up on housework that didn't get done while I was away last week.  Where, oh where, is the house fairy when I need it? Oh well, since it was cold outside it was a good day to stay indoors anyway. I even did a little baking. One of my daughter's favorites are mini cheesecakes. Since she likes them plain, I tuck them away and only add topping to a few of them when I put them out on the plate. I've been cutting my batches in half because we don't eat much and I no longer take a platter of goodies to the office.

I got a call from Home Depot that my stove was in and delivery was arranged for Tuesday between 8:30 and 12:30. Hoping for it to be early in the day, but expecting it would be later, I wasn't surprised that the truck did not show up until 12:15. The guys brought it in and hauled out the old one. The older of the two looked at my old stove and said, that's a 17 year old there. He was probably pretty close. I was advised not to plug it in until the stove reached room temperature since all new appliances have computer chips in them. So off I went to do some grocery shopping.

Oh my, were the stores busy! It was senior's day at Safeway...the place was swarming with us over 60's. Some moving slower than others. They were out of ground beef so I stopped at Co-op on my way home as they had it on sale there as well. Same mob scene there too. While I prefer to do my shopping when the stores are less busy, I did get 10% off the cost of groceries at both stores. I'll take it.

More snow arrived on Wednesday, with warmer temperatures. I spent the morning playing with my new stove. I baked a small batch of chocolate-chocolate chip cookies after pre-heating the oven, allowing it to cool, then pre-heating again. I was warned that there might be a bit of smoke or plastic smell and there was on the first pre-heat, but it was gone and the smell of chocolate soon filled the air. I prepped our evening meal as well, cooking up some macaroni pasta for mac & cheese, and boiled some eggs for egg salad sandwiches for lunch meals. I repackaged the ground beef I'd purchased the day before and made up a meat loaf to put in the oven for dinner.

After lunch the snow had stopped so I headed out to do more shovelling. I don't think we had more than an inch so it didn't take long. The temperature was a more temperate -9C (16F), and it felt good to be out in the fresh air. 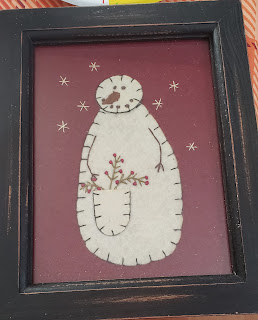 Thursday, I had a couple of items to drop off for Santa's Anonymous at Walmart, and I picked up some candy canes for baking/candy making or simply to gather dust in my cupboard until next Christmas. Since I was out I made a quick run to the Salvation Army thrift store and Value Village. I found a couple of t-shirts for myself at the first store, and a soap dish, some large bows to hang on the front of the house, and a bag containing a wooden Christmas tree, a framed handcrafted item, and a wooden plaque. The framed item was tucked between the tree and the plaque and was a lovely surprise when I opened the bag. I plan to display it after the Christmas decorations are put away.
My daughter needed me to run an errand for her, but I'd forgotten on Thursday (and she hadn't reminded me) so I had to head out again on Friday morning. Since I was out I took the baking for my friends and dropped it off at their doorstep. I made a stop at Bulk Barn too, to pick up caraway seeds for some Irish soda bread. That could have waited until next week but since I was out it made sense to make a stop. That's enough running around for me this week. I'm happy to stay home for the weekend.

Did I mention there is more curling? Yep, this week the senior men and women's provincial teams are battling it out for the Canadian title. There has been some very good curling, proving that curling is a game for all ages. Our Saskatchewan men lost their game this morning, while the women appear to in control of their game. The men's game was streamed, but not the women's. On the football side of things, our Saskatchewan team lost in Sunday's western final. I wasn't surprised at the loss but the game was actually very close and came down to the final play. This weekend will be the Grey Cup (the Canadian championship).

It's been a very good week here. I'd prefer to have warmer weather but one of the perks of full retirement is the ability to choose when I leave the house, and another is doing as little or as much as I like during the day. My son has made forward progress in dealing what was troubling him - the situation isn't over yet but this momma is proud of him.

Have a good week ahead everyone. Take care and stay well.

Posted by Maebeme at 11:21
Email ThisBlogThis!Share to TwitterShare to FacebookShare to Pinterest
Labels: baking, Christmas, curling, dreaming of the beach, football, shopping, weather