Lost in the past

Another week nearly ended and again, I'm struck by the speed with which it has passed. I do know where I've spent much of my time (and it wasn't watching curling).

This past weekend I received an e-mail that informed I had free access to the newspaper archive website. I started some research and didn't get very far before the free access ran out at midnight on Monday. Tuesday, I decided to check into it further and started a free trial that I thought I would cancel on the 28th - due to cost of the subscription. As a result I've been spending a lot of hours engaged with the site and Ancestry, transferring information from articles to the profiles on Ancestry. I won't say how many hours but suffice to say, I have to take regular breaks to do housework because my eyes start going buggy. I keep a pad of paper beside me to track the names of individuals I've completed the research for. It gets a little hairy in some places because I have relatives who married other relatives - second/third cousins - and I get tangled up in a loop. It's clear I won't finish the task before the trial is up so I'll pay for the subscription for six months - there's some really interesting stuff beyond the birth, wedding, and death notices.

One of first bits of research I completed was to search my parents names. I found an article for both, written many years apart.

The first article was written in June 1940. Several city service clubs were raising funds to "buy a tank for France", and a raffle was held as part of the fundraising. The article mentioned donations and letters received from various individuals. One of those letters was written by my mother.  It read,"Could you send me some of those receipt books. I would like to help buy a tank for France. I could sell them in town here and in the country. I am only 11 years old but I am knitting and I would gladly walk 50 miles and sell those receipts to help France and Great Britain." She closed with a post script "I am enclosing quarter as my donation."

As I read her words, I was impressed at her passion and her desire to be part of war efforts. (Canada joined their Allies in 1939.) Although she would not know it then, two of her future brother-in-laws were overseas. I have an article about their return to Canada where they met again in a hospital here in Regina. In light of the current world events, these articles truly make me appreciate the life I live here in Canada.

The second article referenced my dad and was written in 1999. It was written from an agricultural perspective and the author had visited the Canada Day event held at my home town's museum. On display were several pieces of machinery including old tractors, an Avery threshing separator, and an old saw mill. The author wrote "One thing I noticed that caused me some concern: the fellows operating these machines were not very young - in their 60s and 70s I thought. So I phoned up E H*, a volunteer with the museum and checked. That was an eye-opener. Only two of the guys running the machines were in their 60s, the youngest being 65. The rest are in their 70s and 80s... Mr H. himself, who canted logs at the mill and also pitched bundles into the separator on Canada Day, is 89!" *That's my dad!

Dad retired from farming about ten years prior to that event. He was always moving and doing something. When he and mom moved to town he started volunteering at the museum and spent much of the year there, sometimes just having coffee with other volunteers but often working on one of the buildings or a piece of machinery. One time he was up on the roof of an old house, slipped and fell and knocked himself unconscious. When he came to the ambulance was there and he asked who that was for. He refused to go the hospital until everyone promised not to tell my mom. Lucky for him, he wasn't seriously hurt and mom was out of town and didn't find out for sometime.

On a different note, here are a few photos at the bird feeder this week.

I was surprised to see these two sharing the space. Typically the birds scatter when Hoover shows up. 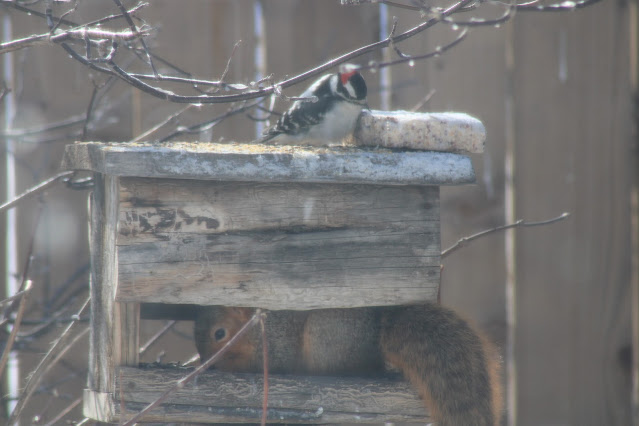 It took a bit of patience to capture this photo a day or two later. It kept hiding behind the feeder on me. 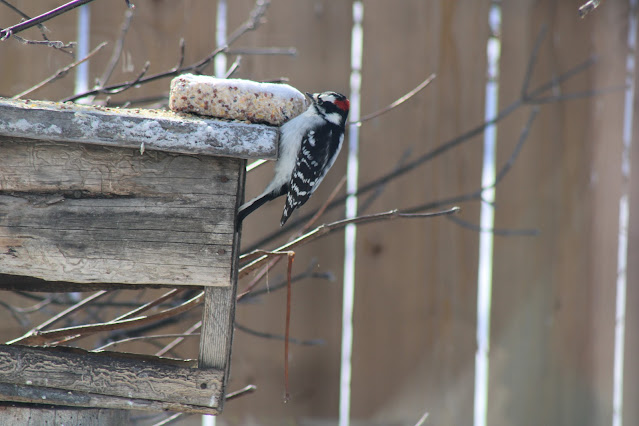 Finally here's a shot of a bird I assumed was a grosbeak but I've been informed it is likely a red poll. I'll let my more knowledgeable readers inform me. 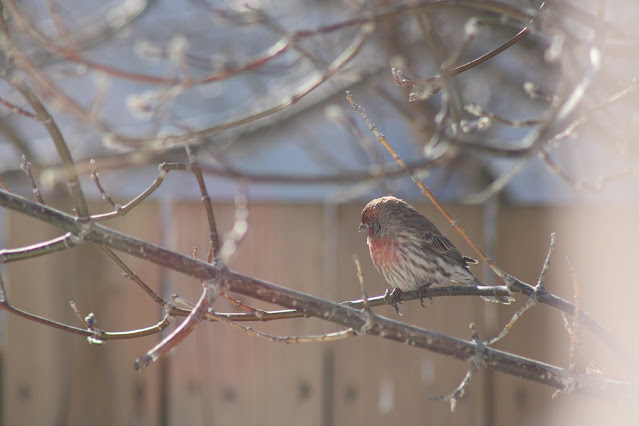 That's all I have for you this week AND I didn't even mention the weather even once! Don't mind me but Ancestry is calling my name. Have a good week ahead everyone!

Posted by Maebeme at 09:05
Email ThisBlogThis!Share to TwitterShare to FacebookShare to Pinterest
Labels: birds, family history