Old and new, up and down

Some good news for my readers - curling for our Canadian teams has ended for a couple of weeks so you won't hear me talking about that for awhile. :) The Olympic curling ended with a bit of whimper; our women bowed out before the playoffs, and our men played for bronze. I heard the results, and watched the game on replay. The Canadians prevailed over the United States. To be honest, the Canadian team didn't play their best, but the US team gave up a steal of 2 points in the 9th end that pretty much clinched the game for Canada.

On the weather front, it's been up a little and down a lot for most of the week. We had one decent day with temperatures rising to the minus single digits (Celsius), then it snowed, and then we were back in the deep freeze. The photo I shared on Wednesday was taken on Tuesday just before I went to shovel. We got more than I expected, probably around 3-4 inches. Thank goodness for the melting that happened last week because the piles were reduced somewhat for me to add to this week. 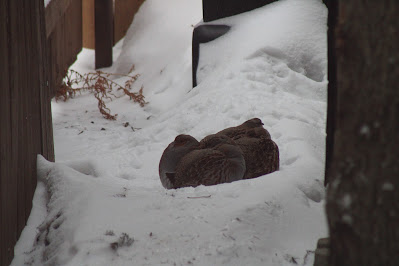 When I looked out the bedroom window Wednesday morning, I spotted this covey of Hungarian partridges huddled together behind the shed. It was windy so I suspect the fences on both sides helped break the wind.

I did run out that day to the  Value Village and Salvation Army thrift stores. It's time (and then some) that I replace a couple of pairs of jeans. There are no changing rooms available to try on clothing, so I picked up three pairs that I thought might work, along with three t-shirts. At home, I was pleased to find out that only the smallest of the three pairs fit. The other two will need to be returned, but I now have a brand name and size I know will fit well. I remember seeing several pairs at both stores - I'm certain I'll find one more pair. Both the jeans and tees originally came from Mark's Work Wearhouse which means they should be decent quality.

The contractor, Jason, was in touch as well. The flooring has been ordered and expected to in next week. When he has a confirmed date, he's planning to pick it up and deliver it here for storage until he starts work on the basement in April.

My son will be moving upstairs during the construction so I spent some time on Thursday rearranging my craft room to make room for Eli's toys. C will take over the second spare room directly across from the main bathroom. We won't be moving him yet but the craft room needed tidying anyway and I had some boxes stored in the spare room that needed sorting as well. Some of it will need to go out to the garage...that's not happening until it warms up a bit more.

On Friday I finished up removing the last of the carpet backing in the basement. I swept up the debris and ran the vacuum over the floor to pick up as much dust as I could. I'll check with Jason next week to see if I need to do anything more with it. He will be doing a skim coat of self leveling material before the floors are installed so I'm hoping there won't need to be more prep done on my part.

My other focus this week was on Ancestry. K, the cousin who started me on this path, has hired a genealogist to search more records in Ontario where my great-great grandfather Hugh was granted land in Huron County. Among the information he's found is a copy of Hugh's obituary and that document provided a very interesting clue. (K will be mailing me a copy of it, when he returns from Mexico in early March). The obit mentions his niece among his living relatives. With that information, K was able to locate her mother Jane's headstone.

There was a bit of confusion that ensued because according to the headstone the year of Jane's birth is earlier than the parent's marriage. I believe the information on the headstone has been misinterpreted because I was able to locate the baptismal records for Jane, which indicates her birth occurred in 1798, about a year after her parents married. While I was searching the baptismal records, I was able to identify an additional six children of the couple. Until this point, I believe we only knew of three, not including Jane. Of special interest to me are two sons, Alexander born in 1811 and Andrew born in 1816. Hugh was believed to have been born on May 6, 1816, while Andrew was born in July.  We know it isn't possible that his mother gave birth to two children nearly three months apart so that leaves us with another mystery. Family lore suggests that Hugh changed his name when he came to Canada - and I've always thought that referred to his last name. But maybe, just maybe, he actually changed his first name and perhaps his last too. There was also the suggestion that he cut off ties to his family in Scotland, but one story from family history suggests there was an inheritance which he spurned.

Assuming Jane is his sister (and I believe she is) then this might suggest that Hugh is either Alexander, the oldest son (he did name one of his sons Hugh Alexander), or he is Andrew and he simply changed his birthdate. I doubt any records were needed/provided when he emigrated to Canada. I suspect we'll never know for sure but it certainly makes the journey interesting.

I don't know where this week went, how can it possibly be Saturday already? Today we've got a wacky mix of weather, it was cold overnight, but the expected high temperature is about 1C (33F) with mixed rain/snow precipitation. When I went out to feed the birds, I did a bit of shovelling to clear the driveway and sidewalks of what had blown in. Hopefully that will ensure I don't have to get out with the ice melt tomorrow.

I'm off shortly to return the jeans to the thrift stores while the weather is nice. The forecast is for another cold week ahead and Monday is a holiday here, though not for everyone. I suspect both stores will be closed though. Beyond that, it will be a quiet weekend around here. I've the last mitten on the needles, once it is complete I'll finish off the four pairs and set them aside. Onto another project, though I haven't yet decided what that will be.

Have a great weekend everyone. Take care and stay warm.