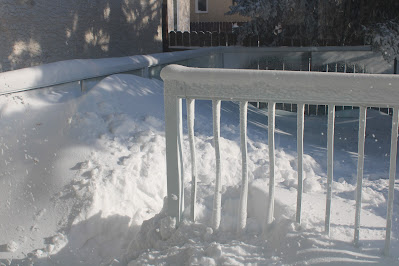 What a difference a day makes! We had some decent weather on Monday, with the temperature reaching a high of -1C (30F). But then an Alberta clipper blew in that evening, bringing blizzard conditions and the temperature dropping drastically. When I went out to feed the birds on Tuesday morning, it was -22C (-8F). Brrr...  The snow had blown in on the sidewalks and in behind the front gate so I wasn't able to get in the back yard as I normally would.  I headed out back through the sun room, and dug a path partway and then just tromped through the snow the rest of the way. 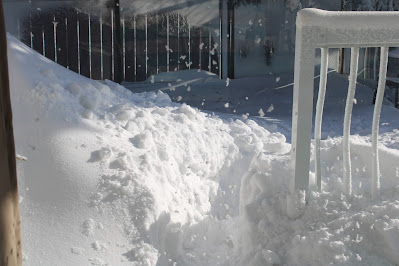 I'll get out and shovel another path the full way when the weather improves. For the time being, I grabbed the shovel, climbed through the pile and went around to shovel out the area behind the gate to allow me to get in that way again. I did go out in the afternoon to clear the driveway. It wasn't much warmer but I need to clear the sidewalks in front of the house within 48 hours of a snowfall.
Wednesday was even colder with a wake-up temp of -29C (-20F) but the birds still needed to be fed. I went out the back to take car of them, and then grabbed the shovel and cleared up behind the front gate. Based on what is on the ground we should have good moisture this spring. Whenever that might happen!

Much of my time has been spent watching curling and knitting, and fitting in chores between games. I've finished three pairs of mittens, of various sizes, using up some yarn I picked up at the thrift store. I baked buns on Tuesday morning - is there anything better than the aroma of fresh baking? Vaccuming and laundry got done too, on different days when I got up from my seat on the couch. The Canadian women's curling will end on Sunday; meanwhile the mixed double curling started this week in Beijing. I've been watching live when I can, and watching a replay of the live stream when the game is aired in the middle of the night. I need my sleep!

In other news, this week I reached the three year anniversary of my retirement (Jan.31) and my little brother turned 60 (Feb. 3). He had hoped to join me in retirement but for a number of reasons has decided to hold off for a couple more years. It's selfish of me, but I wish he wasn't waiting because we'd be able to spend more time together. In the meantime, he's also starting a home business, building live edge coffee tables, side tables, and cutting boards. On Friday, he made several glasses from old wine bottles. The guy likes to stay busy!

On another note, have you seen those television ads that suggest that running your dishwasher uses less water than running your tap for 2 minutes? I decided I'd put that to the test - a very unscientific test - by using the dishwasher and only hand washing certain items for a month. I ran the dishwaser about five times a week and waited for the water bill to arrive. The results - my water bill increased by $10, even after I took out the annual increase in the rates. So I'm back to my handwashing and will use the dishwasher only once weekly or when I have a busy cooking day.

My other test, if one can call it that, was to eliminate potato chips from my diet. I'll admit it, I love potato chips; the salty goodness and the crunch of the chip is my addiction, and I would normally have a bag or two in the house most of the time. I know that the salt isn't good for me. Heaven knows, my family history includes many heart attacks and strokes. I've tried in the past to limit the size of the portion, but that hasn't worked for me. I just go get more.....when the bowl is empyt. So I decided it was time to try going cold turkey on January 1. Since then, I've eaten home popped popcorn twice, but normally if I'm craving something salty I'll slice a couple of small pieces of cheese to eat with a few crackers. Best of all, I've lost five pounds of weight, not nearly enough, but a good start. Don't get me wrong, I still crave the potato chips, and evenings can be especially difficult. Reminding myself that I'm doing this for the long term health benefits is some consolation.

Unfortunately both Eli and his mom were sick this week. They've both tested negative for Covid - D tested Eli three times, and herself five time.  Both had an ugly stomach bug. She let her guard down and had a friend and her two children over to the house earlier in the week. A assured her that both children were over the bug they'd picked up at daycare - apparently not quite. Eli has pretty much recovered, but D is like her mother and doesn't do sick well. She's resting as much as she can with an active 4 year old and calling her mother frequently to whine. She called this morning, and said she's feeling some better. And Eli woke up hungry, all good news.

The cold weather is finally starting to break. I woke up on Friday to -32C (-27F), and by this morning, the temperature had risen to -10C (18F). More snow fell overnight too, so you know what I'll be doing later today. Until then I've got the television tuned to the Olympic coverage.

I'll leave you with a photo of Hoover. It was hogging the birdseed so I went out and chased it away several times. It would run down the fence and sit to wait for me to go back indoors, then go right back to the feeder. 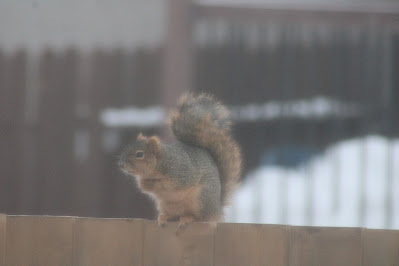