The sun shines in Ketchikan, Alaska

Before we arrive in Ketchikan I'll share a couple of photos from our sea on May 8. I started my day early and was thrilled to see we were sailing into a rainbow - a good omen for this trip! 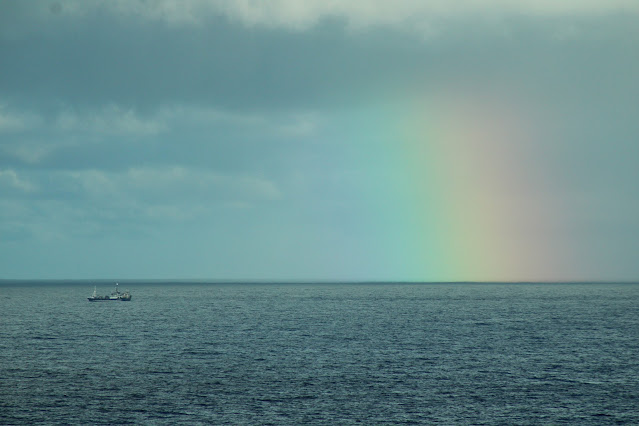 We weren't alone on the ocean, though I'm not referring to the ship in the photo. 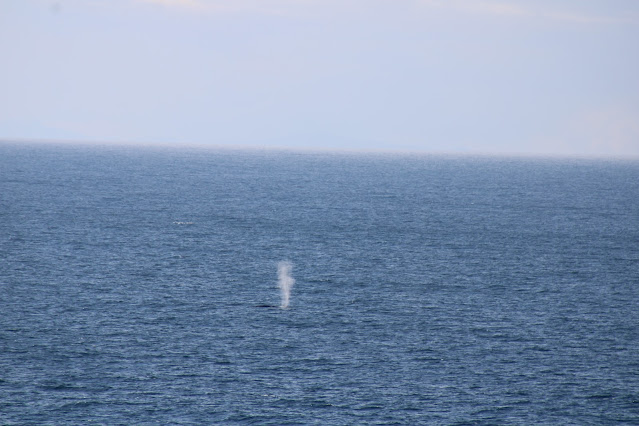 I attended the naturalist lecture later that morning - Mark Harris told us that one can tell the difference between the humpback whale and a grey whale by their spouts. A humpback whale's spout looks like a spout, while a grey whale look more mushroom shaped. Hence I believe this was a humpback...but of course, I could be wrong. I saw spouts almost daily and even a couple of breaches! 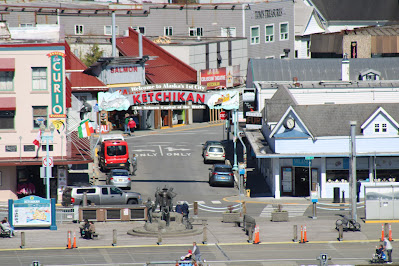 We were in Ketchikan on May 9 and 19. Both days were sunny and mild. Known as the rain capital of Alaska, I've visited the community three times and each time the sun was shining. A local told me at the burger stand that I must have brought it with me. I can't make that claim as our ship's captain informed us on every sunny day that he was responsible. (If it was overcast or rainy it was the cruise director's fault.) :)

On our first stop, our ship was parked right downtown and across from the Ketchikan sign. From there it was a short walk to the Christmas store (I bought nothing though I did look), and to Creek Street. Creek Street is infamous as Ketchikan's red light district and one of the properties, Dolly's house is now a museum. I've visited there years ago, and it's an interesting place to see. Creek Street is so named as Ketchikan Creek runs alongside. Behind the buildings is a winding pathway named Married Man's Way, a trail used by patrons to avoid being seen out front. 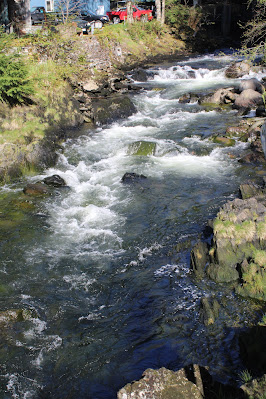 I thought I had taken a photo from the ship of Creek Street, but I did not. Instead you get a photo of Ketchikan Creek. There was a sign that indicated that salmon do spawn in this creek but it was too early in the year for that activity.

I did a wander about the downtown area and ended up at the Pioneer Cafe for lunch. No salmon in the creek, but I had a great homemade salmon burger for lunch. Delicious! 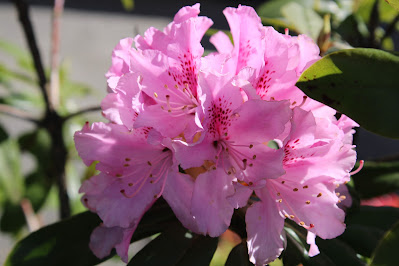 When I left home on May 6, I had noticed my Jacob's Ladder and bergenia's were just beginning to spring forth. In Ketchikan I found blooms! 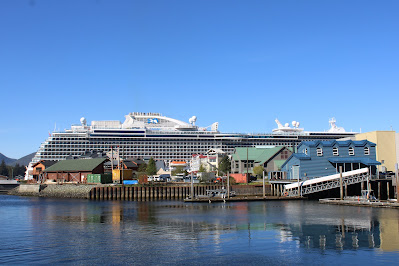 After my lunch and a bit more walking I headed back to the ship, to the Wakeview bar for the rest of the afternoon. Just to give you an idea of how big the ship is, this is a photo I snapped on my walk back. 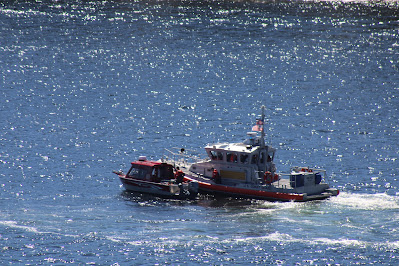 There was more entertainment to be found. The Coast Guard pulled over a small boat with it's lights and sirens and an officer went on board the smaller vessel. It wasn't long before the boat was on its way, so I presume all was well.

There were many float planes taking off and landing. For those who don't know, my first full time employment when I left high school (many, many moons ago), was as a dispatcher and bookkeeper for a charter air service in Northern Saskatchewan. I've never lost my love of listening for and watching float planes. This appears to be a de Havilland DHC-2 Beaver, a true workhorse of the north. 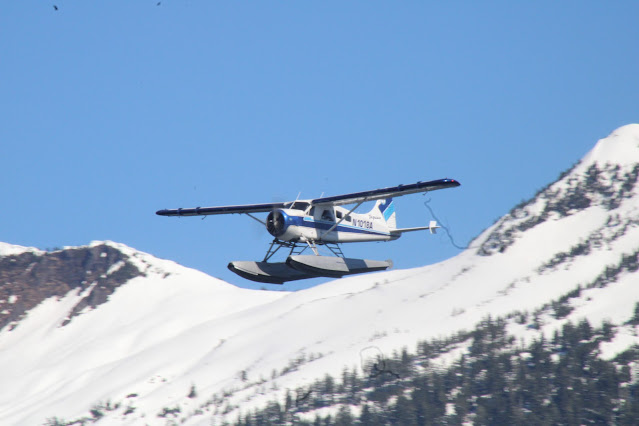 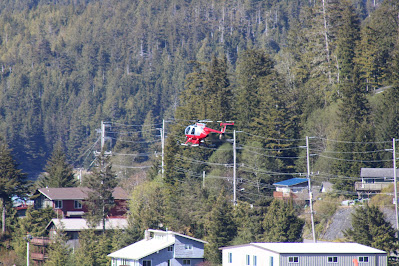 In addition there was a squadron of helicopters nearby. I believe some of my fellow passengers took a flight on a helicopter in order to land on the Misty Fjord. Sorry, not sorry, I won't fly in a helicopter...ever. A fixed wing plane can usually glide to a landing spot (search Gimli Glider), while a helicopter becomes a piano when the rotor stops. I know they are flown safely every day but I simply cannot convince myself. 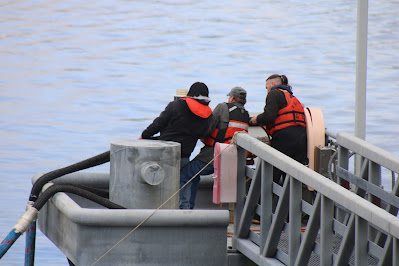 On a happier note, on our return trip to Ketchikan we were parked at the other end of town, basically next door to the float planes. I did laundry that morning before heading off the ship - I knew the laundry would be busy our last day at sea. I spent some time on the decks watching the dock crew tie up the ship. They use massive ropes for this purpose - it takes three guys and a winch to bring the ropes up. 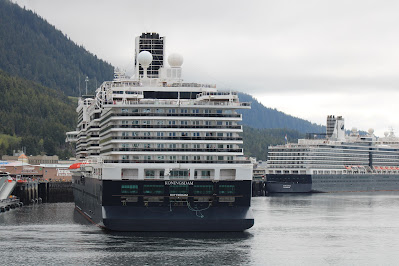 Look who sailed in shortly after we arrived. It's the Holland America Koningsdam we'd seen in Vancouver. I seem to recall they were in another port one other day but otherwise their itinerary was different than ours.
We off boarded from a lower deck and had a ramp to climb. This photo was taken from the ramp. Those posts are starting to look a little worn for wear from my perspective. :) 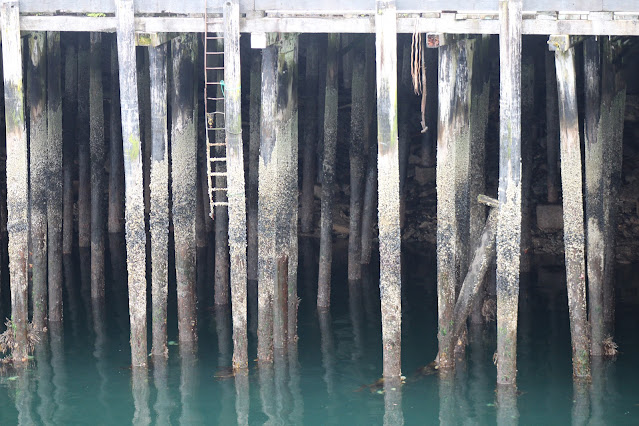 My goal that day was simply to do a walk around that area, and go to the Dairy Queen for lunch. Several of the crew members had told me that it was the best place in town for a hamburger - I just had to give it a try. There was a bit of a line-up when I arrived at 11:30, and it was a half hour wait before I got my order. As the cashier said, "we aren't making fast food here, we're making good food". Look at the size of that burger - no fries required! Like every good burger it was messy. I enjoyed my meal sitting on a bench on the dock, people watching.

While I waited at the burger joint, I noticed these ferns growing out of the rock wall at the back of the property. Again, at home my ferns were just barely out of the ground.
Back on board ship, I headed once again to the Wakeview bar. I'm sure you are sensing a trend here. This was the afternoon I was bound and determined to get another photo of an eagle. Unfortunately my zoom just couldn't do the job as they circled high overhead. Frustrated, I had put my camera away and was reading when someone hollered eagle. I looked up to see the bird flying just a few feet away from the ship! Did it fly by again? Of course not. 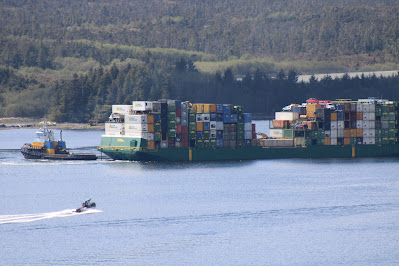 This tug was pulling these large barges with freight cars down the channel. At one point it moved from the side to the the front (as shown here). I assume it has to do with the depth of the water. Amazing that something that small can manage that kind of load. 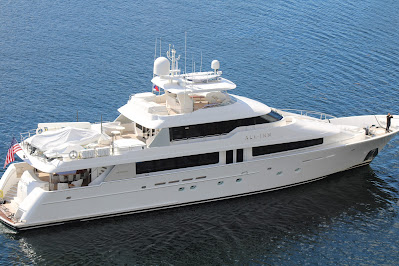 If you have a cool $9.2 million available this yacht can be yours. Another couple told me they'd talked to someone at a bar in town who said the price had recently been reduced.
Though I didn't do anything special in Ketchikan, I definitely enjoyed our time there. There were people and airplanes to watch, a few elusive eagles, and great food. I even did a little shopping on the last day, picking up a photo album for those that I'll print and a t-shirt for Eli.
And that eagle photo I wanted? Well, as we sailed away from Ketchikan, I finally spotted another one. I've cropped the photo because so it isn't the best, but you can see the bird on the pole. 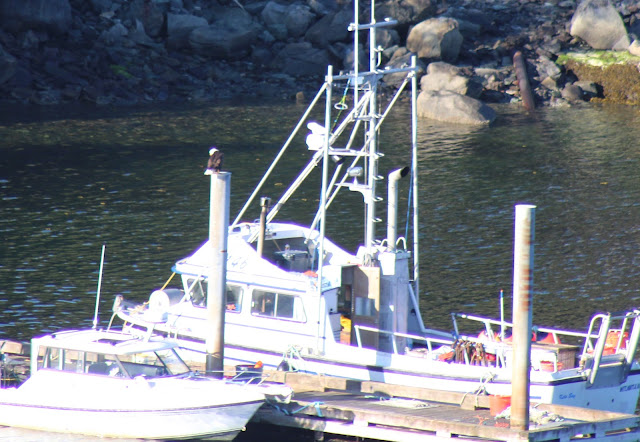 Next up - Juneau, Alaska