On our first visit to Juneau, we arrived to a cool and cloudy day, with occasional rain showers. Later that day, when I asked Captain Annie when the rainy season ended, she laughed and said, "it is 365 days a year." Little did she know that our second visit would come with the sun.  Our port days in Juneau were May 10 and 18. 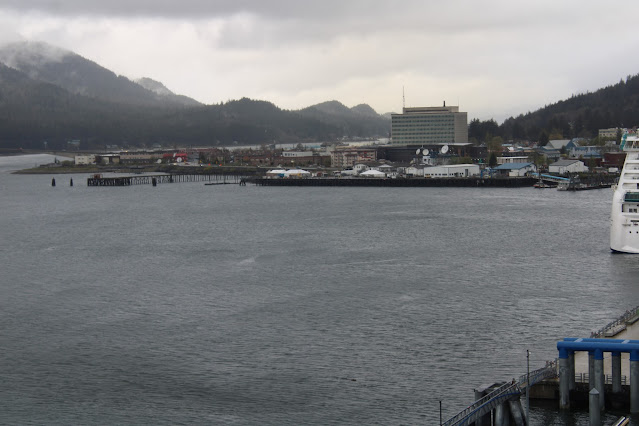 I don't recall when we arrived, but I am certain that my first stop was the Wakeview Bar area. Here I could get the fresh air and stay dry under the overhang while watching for wildlife. 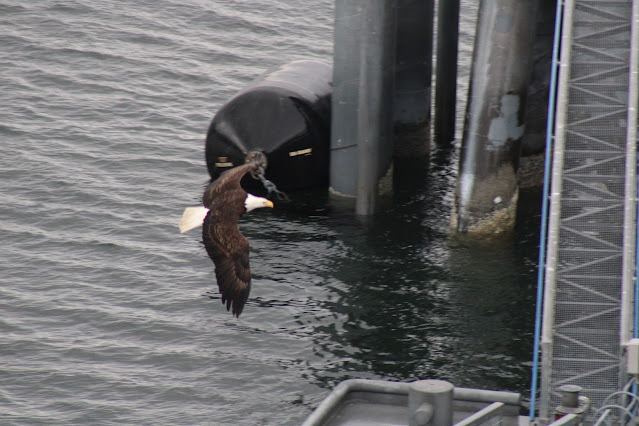 I got lucky and caught this shot of an eagle as it flew past the ship and flew up to the top of the mountain beside us. As I turned to look for it, I was amazed by the view on the mountainside. This photo was taken later, when I was on the dock waiting for the bus for the whale watching tour. It almost looks like a diorama, but I can assure you it is real. 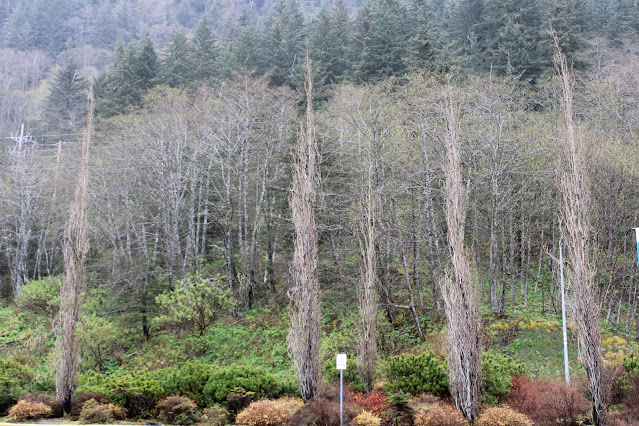 The whale watching tour bus left the dock about noon and the naturalist on board kept us entertained with stories about Juneau, Hawaii, and whale watching. Donna normally lives and works in Hawaii but had followed the whales north to Juneau for this season.
Juneau, for those like me who aren't aware, is the capital city of Alaska. It is one of two United States capital cities that cannot be reached directly by automobile (Honolulu is the other). All goods are brought in by air or sea. The humpback whales travel from the warmer waters of Hawaii and Mexico in April to the cooler feeding grounds of Alaska. Our whale watching tour that day was considered scientific and we would make a stop to check for invasive species of crabs, collecting data for NOAC (National Oceanic and Atmospheric Administration).
First though, our bus drove us to the dock where we would meet Captain Annie and board the boat.  I had a chance to chat with her on the return and she's been on the boats since 2017 and a captain since 2019. At best, I'd say she's in late 20's, early 30's. On our way out to where the whales might be (we weren't the only ones searching) she kept in contact by radio with the others who were out that day. 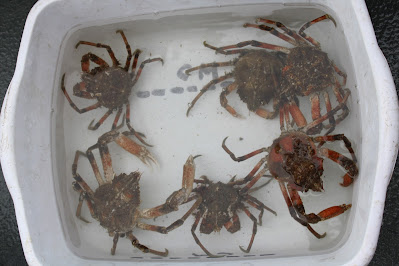 Our first stop was at the crab pots. How they find these pots with their orange bobbers in the midst of all that water is beyond me, but she found it quite easily with Donna's help. We were on the look out for a Europe green crab, which has made it's way into Alaskan waters. It feeds on native sea animals and competes with native crabs for food. We didn't find any, these are just a regular crab (name I've forgotten) and not the highly sought after Dungeness crabs. One of the other passengers, helped pull them from the crab pot, and then they were released back into the water.
You can see how low the clouds were that day, and we did run into a few rain showers as we travelled through various areas searching for the less than cooperative whales. 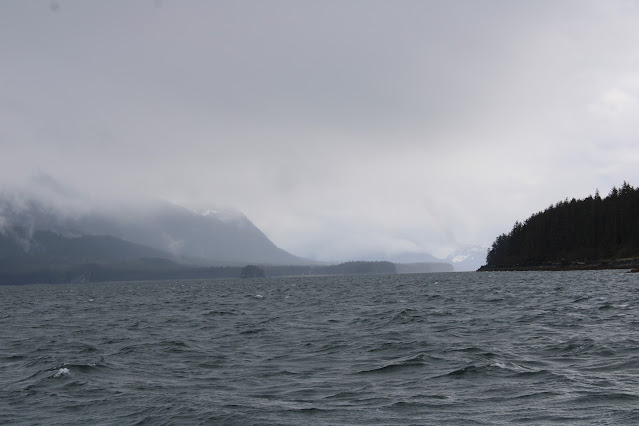 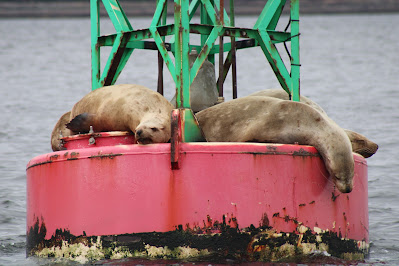 Next up, was a visit to a marker where the sea lions like to rest. The one on the left reminds me of my cat Saku's sleeping positions. :)
We didn't stay there long, just time enough for a couple of photos and then a radio call came in. A humpback had been spotted closer to the area we had originally started the search. Captain Annie throttled up the boat and off we went to find the whale.
It's not the best photo, and I didn't catch the fluke but it is a humpback whale above the water. We didn't get to see it breach again but did see it's spout a number of times. The company will not stay longer than 30 minutes in the area of the whale due to the stress it can cause the animal. 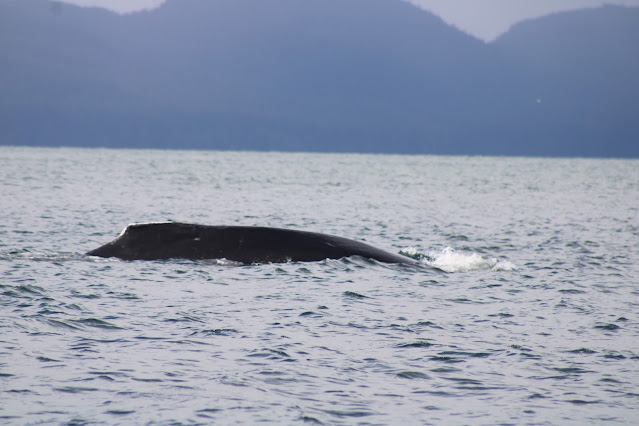 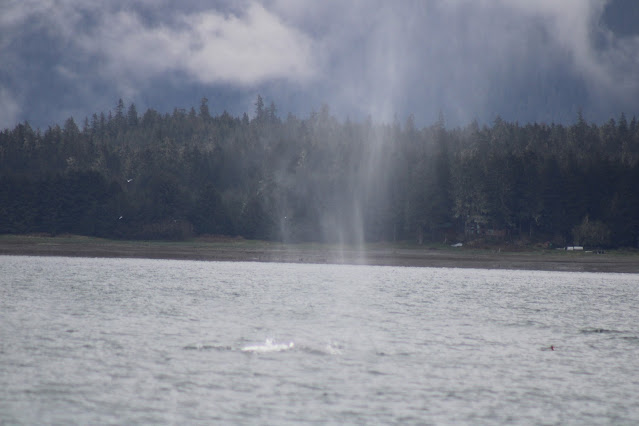 The spout looks much different from the small boat!
We'd been out for a couple of hours at this point, and it was time to head back to the dock. I'm so grateful we were able to see the one whale. If I ever have the chance to do another whale watching tour I'll be there. 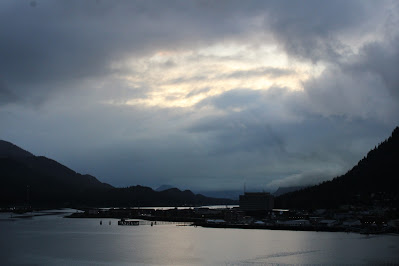 No notes to remind me, but I'm pretty sure I was on the aft of the ship for the rest of the afternoon. Late in the day, I caught the sun trying to break through the clouds. 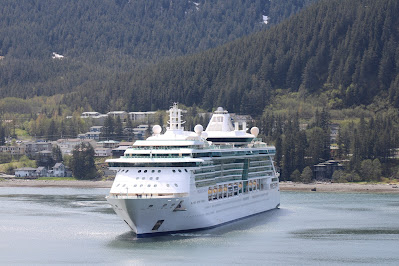 On our second visit to Juneau, May 18, the sun truly shone.
I had no excursion planned for the day, so walked into the city's downtown for a little shopping. In particular I was looking for a yarn shop. I had been attending the almost daily Knitters and Knatters group on the ship and was inspired to make a purchase.  First though, I found a local cafe with free WIFI where I sat and enjoyed a tea and took care of e-mails and some necessary banking. Utility companies don't seem to care that I'm on holidays! 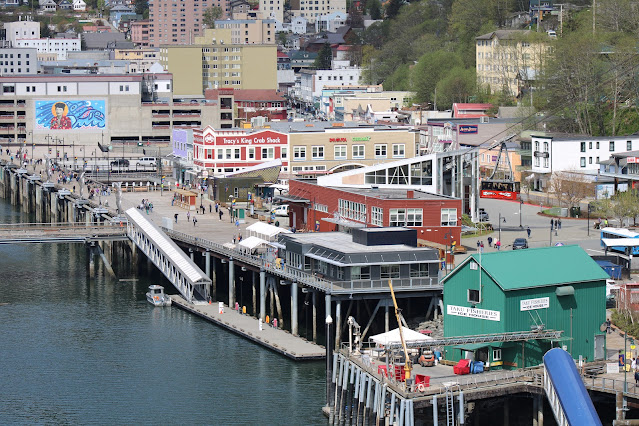 Downtown Juneau was a short walk from the ship.  On the left the building with the lovely mural is a government building and contains the local library. I visited there when my search for a yarn shop on foot came up empty. I had a lovely chat with the librarian, who had actually lived in Manitoba many years ago and had driven through Regina. She pointed me to in the right direction to Changing Tides, a fabric store that carries Alaskan yarn and other craft items. I purchased a skein of yarn for a cowl and a floral cross stitch pattern to add to my to-do pile. 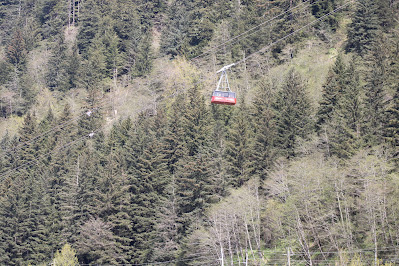 The red and white building to the right of the government building is Tracy's King Crab Shack. This place was busy every time I walked by. I heard later that a pound of King Crab was $99 USD! I'm sure it was very good but well beyond my budget. The other building I'd point out in the photo is the building just above the red brick building - this is the starting point of the Goldbelt Tram Alaska. 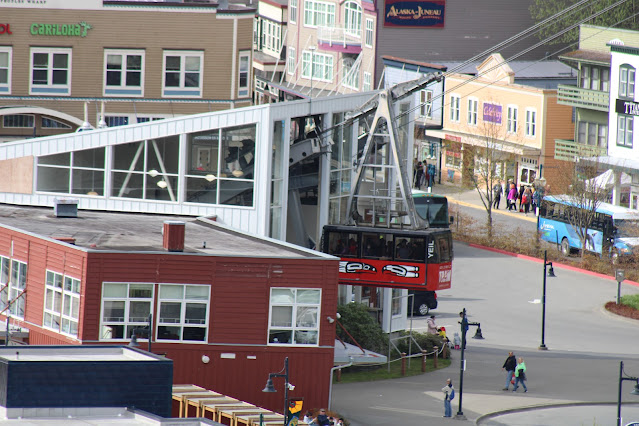 The tram rises 1800 feet up the mountain to the Mountain House, from "sea level to see level". I did think about purchasing a ticket to ride but decided against it. I'd gotten my share of heights the day prior in Skagway, so left this option for another time. Apparently I should have gone, as others mentioned the number of eagles they saw at the top.
Guess where I went when I returned to the ship later in the afternoon? If you said Wakeview, you'd be right.  I recall I met a young couple from San Diego that afternoon, on their second cruise.  They had the beverage package (alcohol) and were making good use of it. He was a financial guy working on his Master's, while she was a chemical engineer. Both incredibly bright and fun to chat with. As we visited, our eyes were drawn to the sight of snow tumbling down the mountain side. I imagine this will be a waterfall as the snow begins to melt at the top of the mountain. 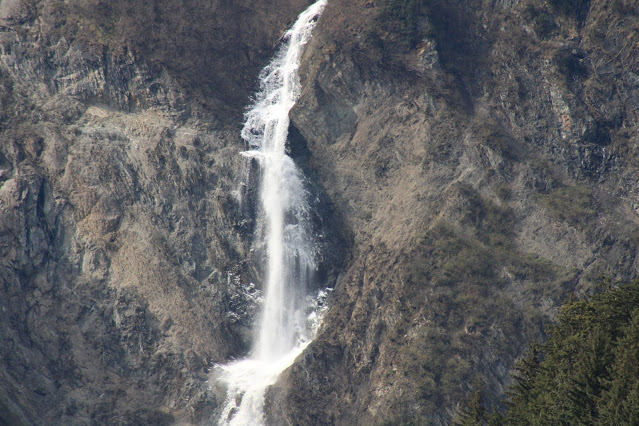 I had two wonderful days in Juneau.  The whale watching tour was both interesting and educational. I'm thrilled to have seen the whale (reasonably) up close and the rare sunny day in Juneau gave me the chance to do a good walk about.
Our next port is Skagway.