Getting things done, taking it easy

It has been a quiet week around here so this will likely be a pretty short post. I did my errands on Monday; grocery shopping, dropped off a donation and did a little shopping at the thrift store, made a run into Michaels that netted more than I anticipated, and ended with my annual mammogram appointment. It was a full day!

I'm on target to remain under budget on grocery shopping this month despite the continual increases in prices. There are four grocery stores within a five'ish minute drive from my home, (though I only visit three at most), and I use their flyers to determine where to get what I need. Since I got rid of the old freezer, I am limited to the volume of frozen items I can keep but I'm finding it works well for us. Nothing ends up at the bottom of the freezer and forgotten like it used to!

The thrift store took the stereo that I mentioned last week, along with a bag of pillows and a small bag of clothing. This netted me another 20% off coupon which I immediately used. Another oops happened that morning. I had put my car keys in the front pocket of my capris, rather than my purse, and apparently the cloth was close to threadbare as the keys tore a hole. I realized it as the keys fell to the ground (not once, but a few times before I clued in). I was happy to find three pairs of capris, and two t-shirts for less than $20.

The trip to Michael's was made to pick up a package of alphabet stickers for a sign I'm making. Yikes those things are expensive, but I had checked at the dollar stores and none carried what I was looking for. I'll share a photo once I decide on the wording. Of course, since I was there I had to take a wander through the yarn section where I found clearance yarn for $3 a ball. The marked regular price was $14.99. I purchased seven balls, three yellow and four cream colored, at that price. They are different weights so I can't use them together but I've got a couple of ideas already for all of it.

The mammogram appointment was quick - I think I was the only client there and the tech did her job efficiently with a minimum of discomfort. I don't expect any issues but with a family history of breast cancer (on my dad's side), I'm willing to undergo the procedure to be safe. The appointment was a lot sooner than I expected - when I had called to make it, the earliest they could see me was December 29. There must have been a cancellation as I had a call two days later that I could get in this week.

Other than that, I did some of the always needed housework and a bit of yard-work. The weeds are certainly enjoying the weather we're having! Back indoors, there was baseball, hockey and football to watch. I do enjoy the games and the time it gives me to knit and crochet. I finished the mittens, and used the remainder of the yarn to make a slouchy hat, as well as finishing the straps on the bag I made on the cruise, and a doll blanket and pillow. This used up a small amount of stash. :) I've since pulled another UFO, a tank top I started a few years ago, and decided to unravel it for another project. It took me awhile to find the pattern I wanted to use, but there is the start of a sweater on the needles. I realized that the top wouldn't use up all of the yarn I had on hand. Wish me luck, because I'm sure this project will be a lengthy one. I'm much better at finishing the small ones.

I did get out to walk one morning too, rather than walking in the house. Here are a few of the photos from that day. 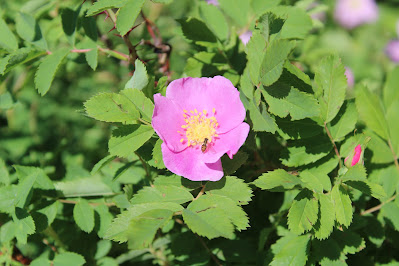 I'm always happy to see the wild roses. These are flowers of my childhood. 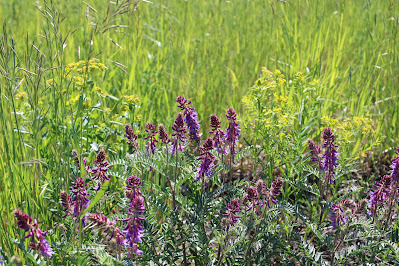 The wildflowers were prolific along the path on the opposite side of the creek. This is the area where there is no sidewalk so unless one ventures off the path they wouldn't see these. 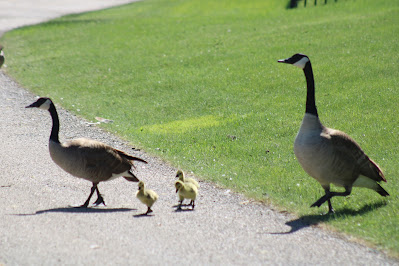 At the pond, there aren't as many geese, and I was a little surprised to see this late batch of goslings. Most of young geese have lost their yellow fuzz and are starting to spend time on the water. 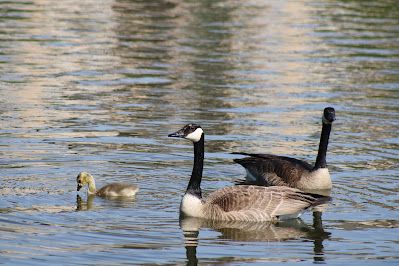 This pair and their youngster have been constants at one end of the pond. They were obvious because there was just the one gosling. 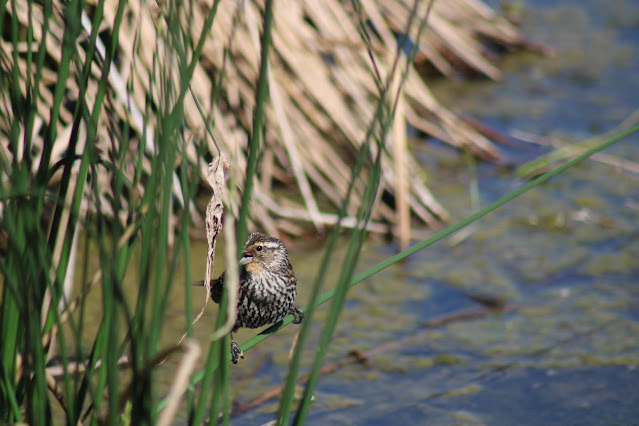 And another female red-winged blackbird posed for me!
Today, it's been raining most of the night and expected to continue throughout the day. It's also very cool, especially in comparison to temps we had earlier in the week. We'll be lucky to reach 19C (66F) later today. More time to knit this afternoon and evening, while I watch baseball and football. Before that I need to get my walk in - with the basement mostly empty it makes a good walking track.
Have a great weekend everyone!