This week has flown by in a flash, and I'm reminded we're a mere three months away from 2023. Autumn is definitely here with cool nights, though the heat has been turned up during the days. Thursday, we broke a record of 135 years, with a high of 31C (88F). It's cooled off since and I will spend some time this weekend pulling annuals from the containers. There is definite frost in the forecast this upcoming week and I'd rather pull while they bloom than clean up a sodden mess.

As I mentioned last week I spent a couple of days visiting my daughter and grandson. Lots was accomplished inside the house on that first day so we took a break at the park on Saturday afternoon. As soon as Eli arrives at the park, he removes his shoes and socks - hence the foot photo from wordless Wednesday. I swear if he ever grows into those feet, he's going to be a very big boy. D tells me he is six inches taller than most of his classmates, and at least 3 inches taller than the next tallest. This surprises me as neither his mom nor dad are tall, however my son and my brothers are all over 6" so he does come by it honestly. 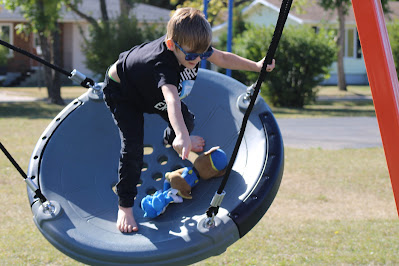 One of his favorite pieces of equipment is this swing. He sat on the swing, asked us to give him a push, and then climbed to his feet. Evidence of great core strength and no fear! 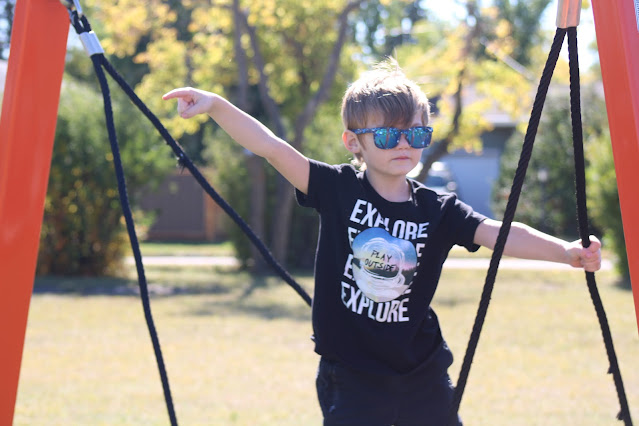 I drove back Sunday morning, planning to stop in the valley if the autumn colors were evident. But it was still pretty green so I kept on driving. I did make it home in time to watch the final curling game of the weekend. (I didn't miss out on the women's final as I'd PVR'd it and watched it later - priorities, right?)

Tuesday I headed to pick up a few grocery items that were on sale. Since it was senior's day at Value Village I headed there too. I wasn't looking for anything in particular, and was mostly browsing. Then I spotted these lamps (the photo makes the one shade look smaller but it actually isn't). I got the pair for less than $20. When I got home I discovered they are tri light lamps - perfect for my need for better lighting for stitching. Even though the bulbs were $20 a piece these were still a decent bargain. They replace an old set I've had for 15 years or so that will be passed on to my daughter.
Wednesday was stitch and chat with six of us in attendance. One of the regulars, D wasn't able to make it; S said D had Covid a few months ago and hasn't completely recovered yet. All the more reason to try to avoid it, knock wood. One of the ladies is working on a knitted kitchen towel; it is working up so nicely that I'll have to ask if I can photocopy the pattern. S had been to the optometrist that morning and had her eyes dilated so she sat and kept us entertained.
On Thursday I took a drive out to my brother's place in the valley north west of Regina. Neither he nor I know why but in that part of the valley the leaves have changed color and the wind we've had this week has taken a lot down already. I did get a few photos to share. As I was driving above the valley I spotted a hawk on the bale in the field and came to a screeching halt to take a photo. It flew off, but then I noticed there was another hawk just a couple of bales further along. This time I was a little more cautious and was able to get the shot before it flew off. R thinks it is likely a red-tailed hawk. 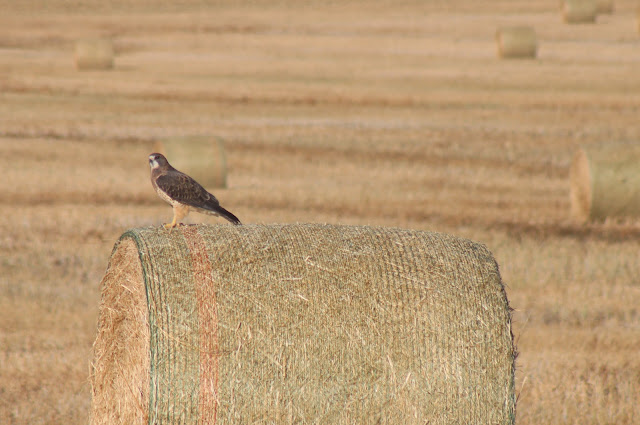 This next photo is my favorite of the day and was taken as I drove down the hill to the valley. I pulled off to the side of the road, and for the first time in my memory of making that drive, I had two vehicles pass by. Almost a traffic jam, lol! 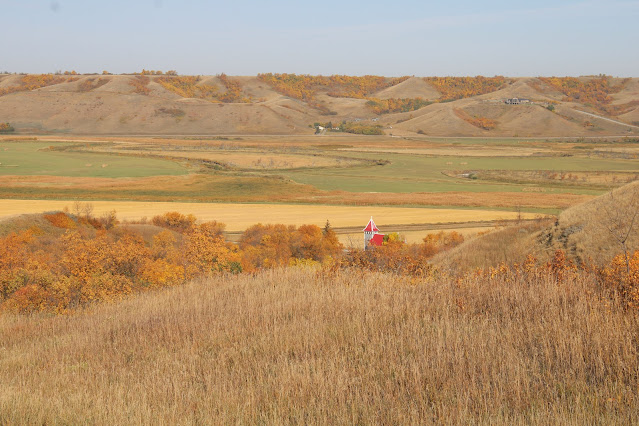 It is unusual to still see the green on the valley floor at this time of the year. The red roofed Anglican church is rarely used, mostly for weddings and a few funerals. There is a cemetery on the property too.
After checking R's newest project, a rocker for the front porch, the two of us took a walk over to a nature reserve next door. I should mention my back was giving me grief so our walk was mostly limited to the lower elevations though there were a couple of places where we had to climb. Thank goodness for the small saplings along the path. At the end of the trail, we reached the parking lot and turned around there to return to the house. We had Kola with us (the dog) and dogs are not permitted in this area. 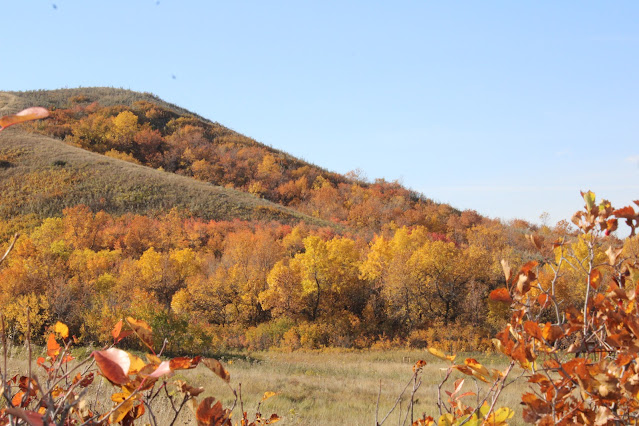 R's property runs up against the preserve and he maintains many of the trails that lead in and out. Since he's done started doing this work, they have started marking the trails for their members. It works for R as he likes to run the trails and they appreciate the widening of the deer paths.
We headed back to the house and sat out on the verandah chatting for a half hour or so before I headed back to the city. By the time I arrived home, my back felt even worse, so I called the chiropractor and made an appointment for Friday morning. Good thing, as I woke up in the morning in the shape of an S. My left hip appeared to be an inch or so higher than the right and any movement that required me to bend was extremely painful.
My appointment went well, starting with a ten minute electronic massage - a first for me. I felt absolutely no pain while that was happening. She did an adjustment in my lower and upper back and I can't say that wasn't somewhat painful. Before I left she explained that my muscles are tight and my sciatic nerve is inflamed causing the spasms that shifted me into the S position. I'm to take an anti-inflammatory, and keep active as sitting or laying down will merely cause things to seize up.
So I came home, took a couple of Aleve and headed outdoors to start the fall clean-up. No heavy lifting was done, I merely cleaned up a couple of containers, cut back the ferns, and swept the front patio and back deck. Indoors I did sit briefly for my lunch, and later to do a bit of crocheting. But I timed my breaks based on the television, and got up to move during the commercials. As the day went on, the pain did lessen quite a bit and I got in over 14,000 steps.
I might have overdone it a bit, as I woke this morning feeling quite stiff and sore.  I'm continuing to move though as sitting definitely is not good for me. The laundry is done for the week, and I'm heading outdoors to pull a couple more containers. Then there is baseball and football to keep me amused until bedtime.

Just one last photo before I end this post.  It was taken with my cellphone early one morning as the morning light was shining on the tree. Since then, the wind has come up and the tree is almost bare.
The rest of the trees on the street have yet to change colour, but I suspect it won't be very many days before they too are losing leaves.
Have a great week ahead everyone!

Posted by Maebeme at 12:13
Email ThisBlogThis!Share to TwitterShare to FacebookShare to Pinterest
Labels: autumn, back pain, bargains, grandson, playing, visit