Day 3 started early; I was up before the alarm went off as I was excited to get going.  I showered and dressed and had a cup of coffee in the room while I finished packing.  I have a bit of a routine, open and clear the safe, pack the carryon with a bathing suit and flip flops, sun tan lotion and camera.  Generally, our suitcases don't reach the cabins until later in the day, so I have everything I need for the day with me.

By 7:45 a.m. I was checked out of the hotel and was enjoying my breakfast (along with my luggage) in the breakfast room.  My shuttle was due at 9:30 a.m. so I was in no hurry.  I headed out to the corner of the building where we were to meet, and found there was a shuttle ready and waiting.  The driver said he had room so I was off to the port shortly after 8:45 arriving just around 9:15.  This seemed a bit early and I knew there would be quite a wait as embarkation usually starts no early than 11 a.m. However, I soon discovered I wasn't the first to arrive...there must have been 20-25 people in line ahead of me.  One of the things I appreciated about Port Canaveral is the waiting area outside the terminal is covered, so even if it had been hot (which it really wasn't) we were in the shade.

The terminal doors opened about 10:30 or so, I was checked in (mostly) and waiting for my group #1 to be called.  That's the first time I've been in the first group.  I had spotted Sandra and Amy in line behind me, they managed group #2; we sat and visited waiting for access to the ship.  When my group was called, I headed to the guest services desk on deck 5 to deal with an issue with my credit card.  At check-in the terminal agent didn't want to accept my credit card, as the name on it is my second name - the one I use regularly, while my passport has both first and second name.  Of course, there were no problems once I got to guest services. I didn't expect there would be as they accepted the card for payment of the cruise)  As I was about to leave the desk, I saw Amy and Sandra at the next station, they excitedly told me they were purchasing "Posh" passes so I decided to do so as well.  (More on that later). 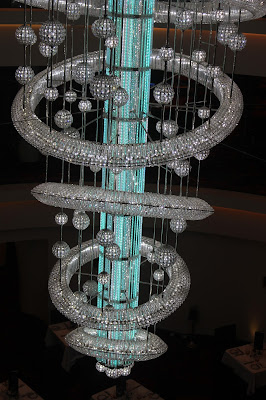 By this time, it was near noon and we decided to do a bit of a walk-about to get to know the ship.  While we've all been on Norwegian ships before, the Epic is unique, she has no sister ship.  There is no central atrium as there are on other ships, but there is a beautiful chandelier, pictured here, that is the most photographed item on the ship.

Deck 5 comprises the atrium cafe, guest services, photo gallery/shop, internet cafe, library, and at one end, one of the main dining rooms (Manhattan).  Deck 6 comprises several bars including O'Sheehan's Irish pub, (includes a single lane bowling alley), the casino, and the other main dining room (Taste).  Deck 7 is the other lower public area, with shops - all pretty much high-end.  I didn't do any shopping though we went there occassionally for various raffles.

Our next stop was Deck 15, which included the Garden Cafe (buffet), two bars, and a pool deck.  We stopped at the buffet for pizza - I only had one slice as we were planning to eat at Taste at 1 p.m.
We stopped on our way downstairs, as there was an announcement that our cabins were opened.  I dropped off my carryon, made a pit stop, and then met the Sandra and Amy in the solo lounge to head for lunch. 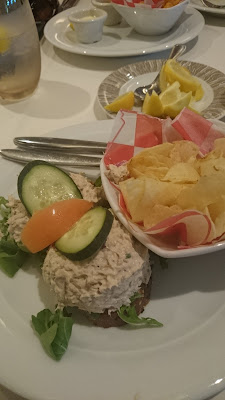 I really enjoy the food on Norwegian; in fact I've only had a few poor meals on any cruise ship.  Today's lunch was an opened faced tuna sandwich with chips on the side.  Very yummy, and having table service is marvelous.  I always ask for lemon for my water glass - every time they brought a small plate so everyone at the table could have some if they wanted.

After lunch we headed up to the Posh area (picture below).  It is an adults only area with loungers and beds for relaxing.  We spent as much time as possible there, enjoying the sun, reading/visiting, and have a few drinks.  I was so impressed with Nestor, the bartended, after one drink was ordered he remembered and called us by our names for the rest of the week.

There was no pool or hot tub in the area, but for the most part, I didn't miss having the immediate access.  Posh was located on Deck 18 overlooking the pool deck, so we could hear the music somewhat but it was much quieter than it would have been below. We had one sea day when we weren't able to access Posh because it was just too windy.  Safety first! 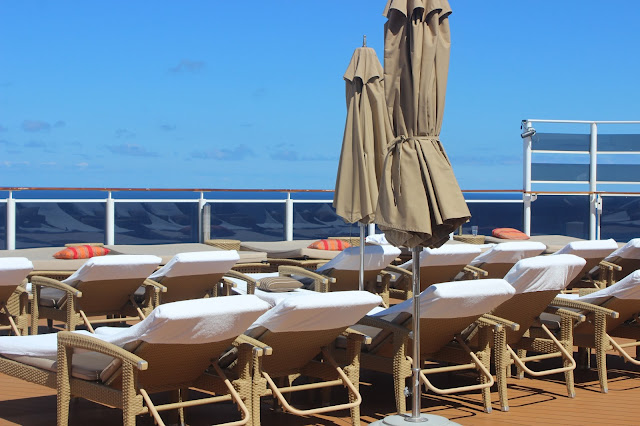 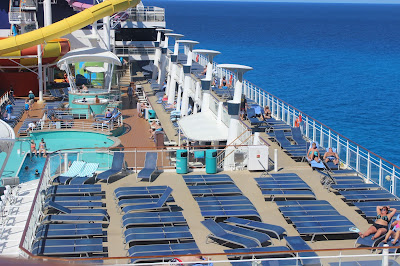 These are of the pool deck from the viewpoint of Posh.  There weren't many people out at this point, but by sail-away every chair would be full.  (Another reason why I liked Posh, not only were the loungers more comfortable but they weren't packed as closely together). 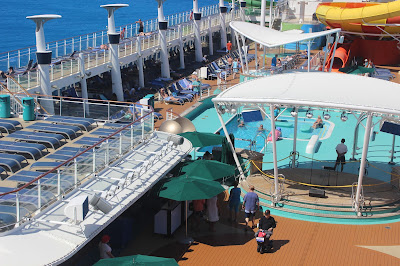 The area under the overhang, right forward was the bandstand.  For at least a few hours a day, we had live music.  There would be people dancing, and lots more sitting at the bar to the right (not pictured).

Muster drill was held at 3 p.m.  Amy and Sandra had a different muster station than I did so we went our different directions.  I was sitting, reading and waiting for the drill to start when I heard a familiar voice at the next group of chairs.  It was Helene, who we sailed with two years ago.  She had told Sandra she'd booked, but hadn't been contact for some time so we weren't sure.  We sat and visited with a couple from Michigan.  Muster drill is a requirement of marine law - we watch the crew members don life jackets and listen to a standard message, 6 short, one long blast that will indicate an emergency.  On some ships (Princess) we have to put on our own life jackets as well, but Norwegian doesn't require this.  Good thing, as I usually end up with the one that some skinny Minnie had on and by the time I figure out how to loosen the belt to put it on, muster drill is already over. 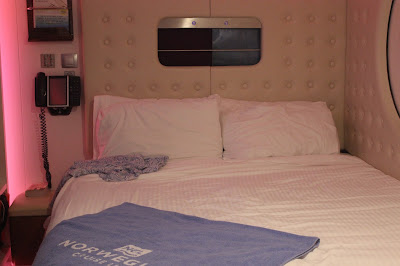 After muster drill, it was time to head back to the cabin to unpack my suitcase.

A solo cabin is small, at only 100 square feet but it has everything one person would need.  On the Escape (my previous experience with solo cabins), the bed was a double, on the Epic I had a queen though it was really two smaller beds pushed together.  As a result, I slept more often on the side closest to the telephone as there was a bit of a difference in height between the two.

Across from the bed was one of two closets, with a safe, the television and vanity area.  I'm a bit of a news junkie, my choices were Fox and CNN so it made for rather interesting watching.  No Canadian news at all, and of course, the immediate focus was on the Parkland school shooting. 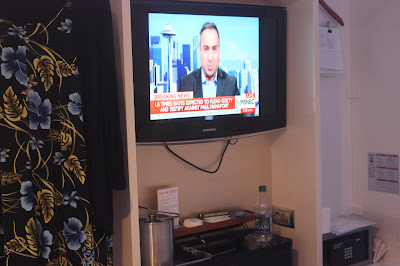 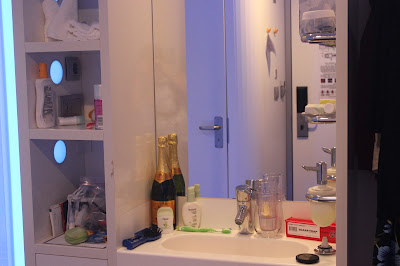 You'll note that I haven't closed the closet door where my clothing was hung.  That was because there were no doors.  I believe they used to have doors on both, as Sandra had one removed in her cabin as it was broken.  I don't know when it is next due for dry-dock but I would anticipate these issues will be fixed then.

To the left of the closet was the sink and storage areas. Most of it was open, though there were two closed cupboards on the bottom far left.  As a returning guest I was given a bottle of sparkling wine.  It was still in the same place when I left at the end of the week.  Not my favorite beverage!

The shower and toilet rooms are separate, the shower is to the left of the sink, and the toilet room next to the cabin door across from the shower.  That concludes the tour. Once the suitcase is unpacked and stored under the bed, I'm ready for the rest of the week. 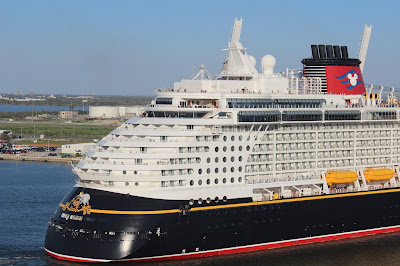 It's amazing to me how quickly that first day speeds by.  By the time I was unpacked and headed back upstairs to the deck above the pool area, it was nearly time for sail-away.

We were in port with two other ships, Carnival Magic, (not pictured) and this Disney ship, the Disney Fantasy.  You can clearly see the Mickey outline on the smoke stack.

I did look into the cost of a Disney cruise....for someday when Eli is old enough to enjoy it.  Ha, the kid better get a job of his own before then! 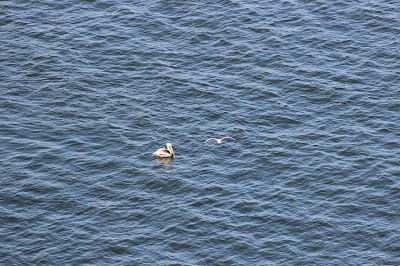 We always have some interested spectators, in this case a pelican, gull and several people.

There are obviously a number of bars and restaurants on the harbour front and all were packed watching the ships go out.  I have no idea what message the individuals below were  trying to convey.  If you have any guesses, let me know. 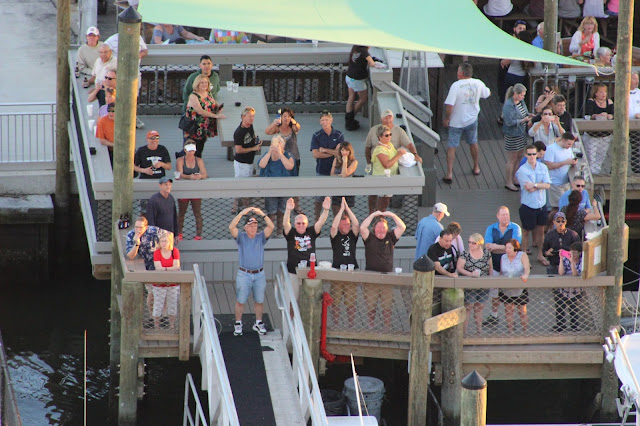 Once we cleared the harbour, it was time to get dressed for dinner and meet the crew in the solo lounge.  As a result, I wasn't on the deck for sail-away past Cocoa Beach.  Another reason to do another cruise!  There's always a positive. :)

We were a large group, 27 that first evening.  Our solo cruise director Lester arranged for us all to go to Taste for our first dinner.  We took up three tables - I made certain to join a different group so I could meet new people.  One of the group, a woman by the name of Diane is an artist.  She told us she did mostly landscapes and Amish art, though I see that is only part of her work.

Dinner ended shortly before 8 p.m.  I was exhausted from the day and headed back to my cabin to watch the news (and the Olympics) before turning in around 10 p.m.  This was to be the routine for most of the cruise.  I'm not a night owl by any imagination though I did try to stay up a couple of evenings to go for a drink with the rest of the crew. 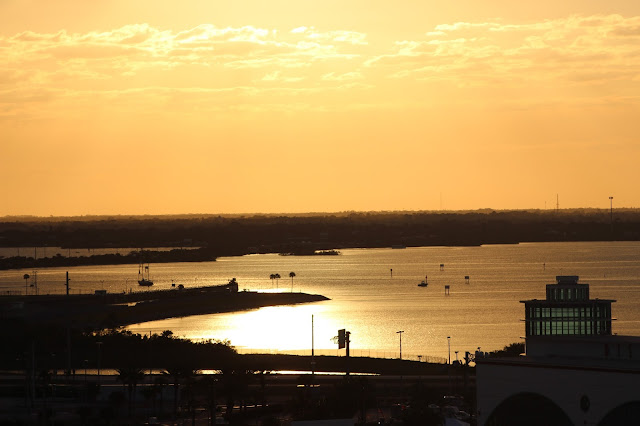 That end Day 3 of my vacation.  Day 4 was a sea day and I have no photos from that day.  It was very windy so we weren't able to access Posh for most of the day (late afternoon) it opened.  I spent the day wandering about the ship, attending various activities, finding a quiet spot to read, and enjoying the warm sea air.