This is going to be a photo heavy post – I think the photos speak for themselves.  On my second day I decided to go to SeaWorld – the I-Ride trolley had a stop right outside the main gate.  I had already decided that Universal Studios and the Disney park was not high on my list of things to do.  But spending time at, what is basically a zoo, sounded like a good plan.

Being that it was Sunday, the park was filled with families, and yet it never seemed crowded.  There are annual passes available that were definitely reasonable, so I can understand why it would be an attractive option.  The day passes weren’t so reasonable; I paid $100USD but all in all it was a great day and I’m so glad I spent my time there.

While I was standing in line-up there was a little girl and her mom ahead of me.  She was clearly excited about being there, so I asked her if she’d been there before.  She said “yes”, and when I said I hadn’t and asked what I needed to see, she responded, “the animal show”…and “the dolphins”….and “the sea lions”.  It was pretty clear that I was in for a good day.

The park is quite large, and comprises a number of exhibit areas, as well as the theatres where the dolphins, sea lions, and killer whales perform.  In addition, there are rides including Atlantis and a huge roller coaster that winds its way above the park.  Of course, there is shopping as well and several restaurants and concessions. 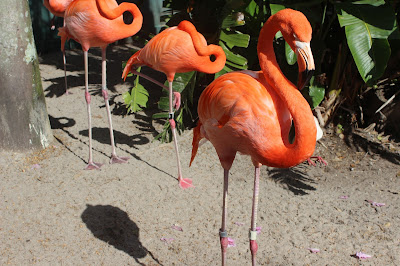 I started my visit to the park at the enclosure with the flamingos.  I’ve never seen them up close before.  What odd looking birds they are, and they truly do sleep on one leg.  Later, I saw them being moved (to where I don’t know).

I planned my day around the shows and had a bit of time before the dolphin show, so after a few false starts and turns I made my way to the Antarctic Penguin exhibit.  The temperature inside the exhibit is about 0C (32F).  I’ve shown my photos to my friend K, who has an affinity for penguins – she tells me there are two or three different species.  I couldn’t tell the difference. 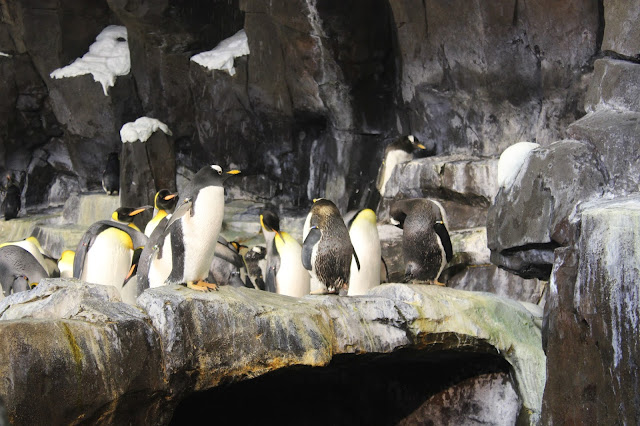 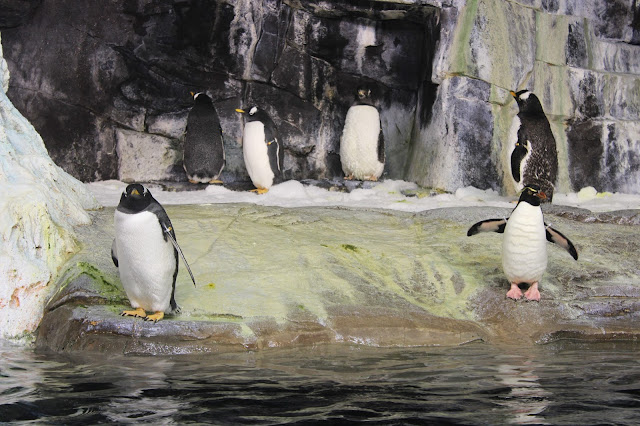 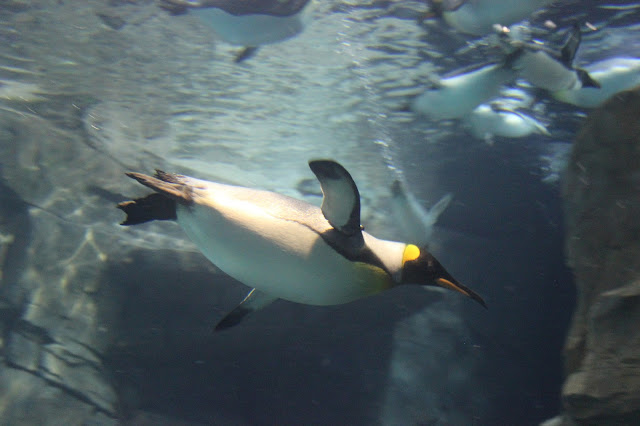 There was an area below the exhibit where visitors could watch the penguins swimming.  I took a number of photos but most weren't clear.  Definitely the best of the lot. 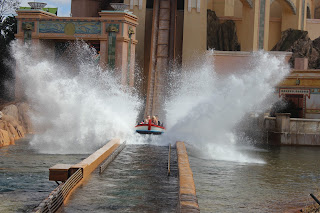 I stopped by Atlantis, no ride for me!

Next up was the dolphin show.  Simply amazing!  These mammals are obviously intelligent creatures and these were definitely well trained. Would they be happier in the wild? Perhaps but there are certainly fewer dangers to their lives in the park. 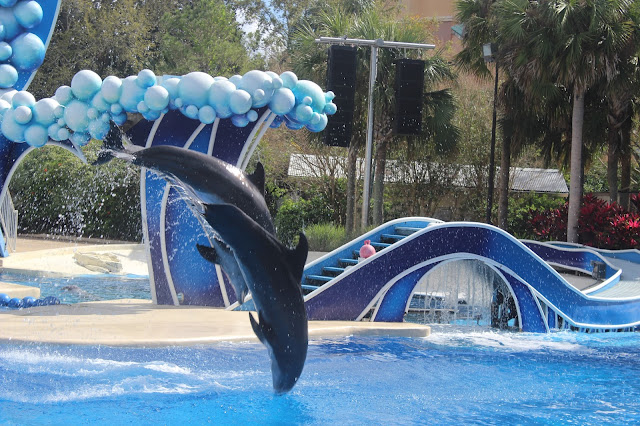 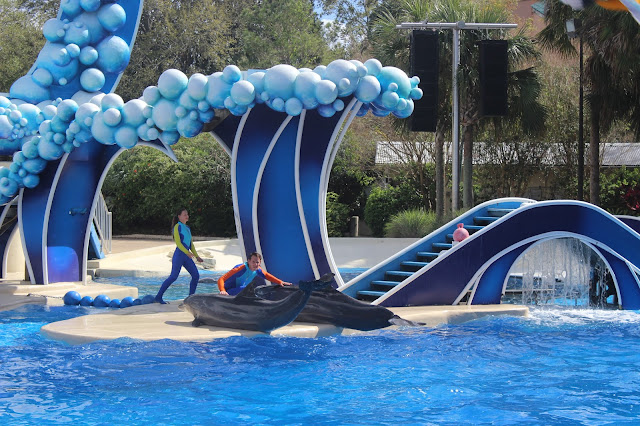 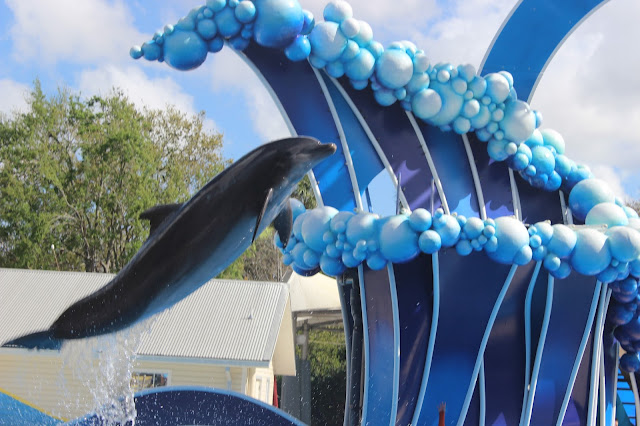 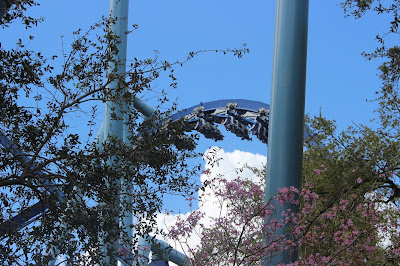 A glimpse of the roller coaster, another ride I didn't go on.

My next stop was the "Wild Artic" exhibit.  I took very few photos as it was disappointing.  Meant to reprsent the north along with the Franklin Expedition, it could have been much more.  There was one beluga whale, one walrus, and one seal.  When I asked one of the attendants why they didn't have a polar bear, she told me "Because it's Seaworld".  When I replied, why do you have flamingos then? - she had no response.

The next show that I attended were the killer whales.  Another amazing show!
I sat beside a mom and her little boy who is a week younger than Eli.  The little one was so excited and clapped with the audience and danced to the music.  I enjoyed watching him as well - I'll definitely have to bring Eli to SeaWorld one day. 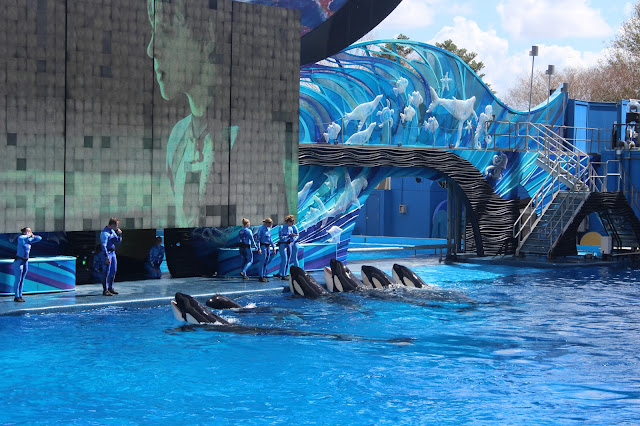 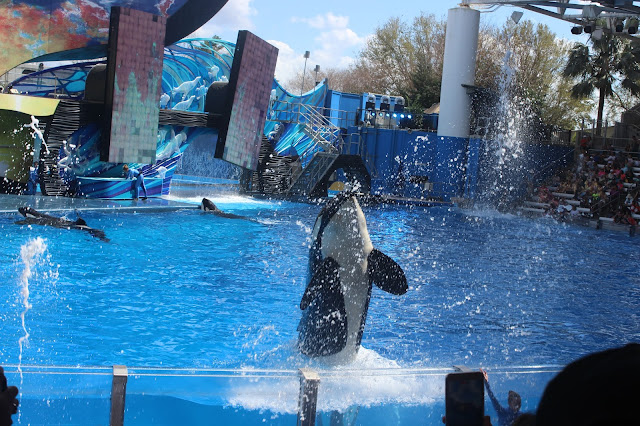 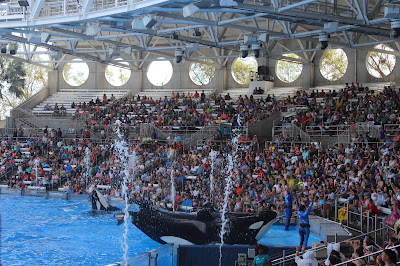 While not a particular good photo of the killer whales, I've included this one to give you a sense of the size of the theatre.

This would reprsent less than half the entire theatre.  It wasn't entirely full as you can see, but there are lots of people.

Yet, leaving the venue and moving to another was never an issue.  They obviously have built the park in such a way to keep the crowds moving. 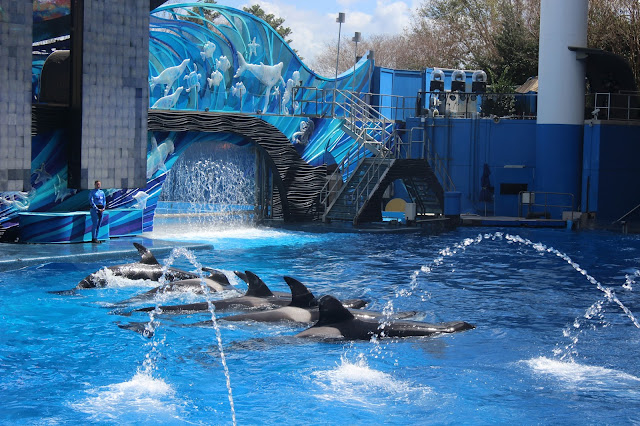 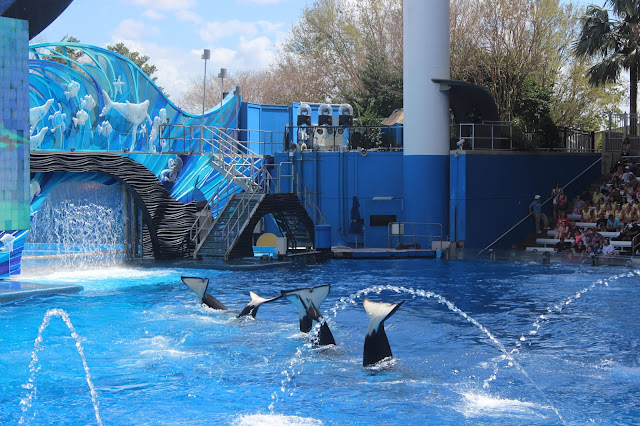 In this last photo, the whales are waving good-bye.  They circled the pool, got close to the edge and used their tales to spray the water into the crowd.  I was in the final row of the "splash zone" but didn't get wet. 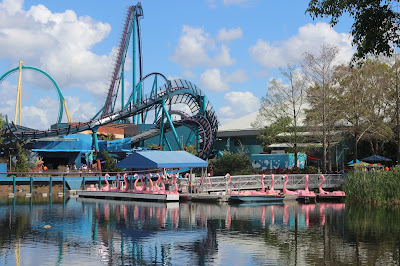 My next stop was lunch!  They have a number of restaurants and kiosks around the park but I wanted to sit down.  I went the Spice Mill, which offered sandwiches, burgers, hotdogs, fries, salads and desserts.  I grabbed a chicken club sandwich and coleslaw, along with a soft drink.  There is a wrap around porch style deck so I went outside to enjoy the sunshine and the view.  I think I must have been hunger as I have no photos.  Though I did take a few on my way to lunch, including this one, another view of the roller coaster (and the flamingo paddle boats) 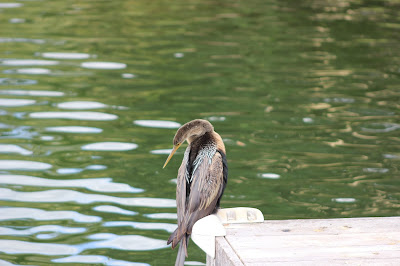 I presume this is a local inhabitant who has made its way to the park for the ponds (and food source?).

After lunch, I headed for the animal show recommended by my young acquaintance earlier in the day.

It was fun show - I can definitely see why little ones would enjoy it.  There was loose story line, but the best was watching the animals race about the stage...chasing well placed treats.  Most moved so quickly it was difficult to get any photos, especially the cats. 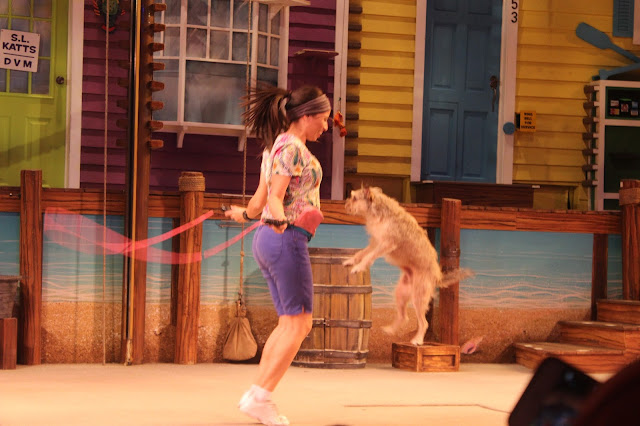 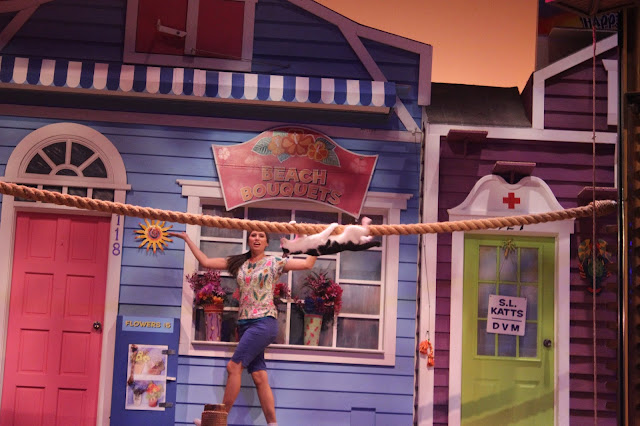 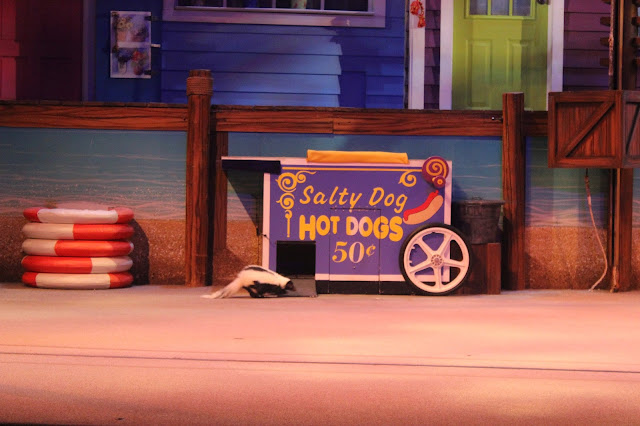 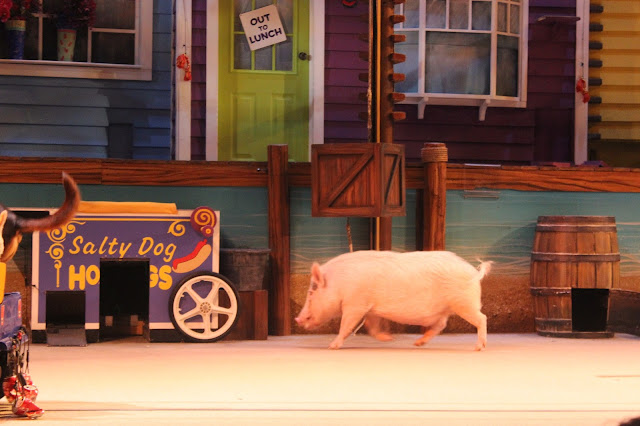 I was impressed with the number and variety of animals.  In addition to the four pictured, there were several more dogs and cats, a hamster and a gaggle of ducks.  The shrieks of the small children in the audience was fun to hear.  (Another reason to bring Eli someday).

I had some time before the next show, so headed over to the open exhibit for the seals and sea lions.  The sea lions are loud, noisy, and incredibly rude especially when a visitor had fish to feed them. 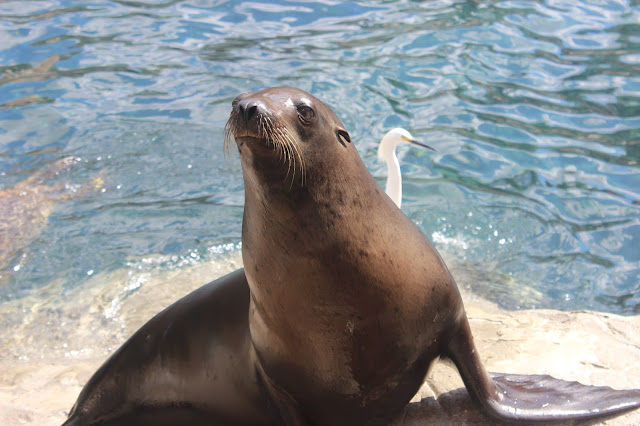 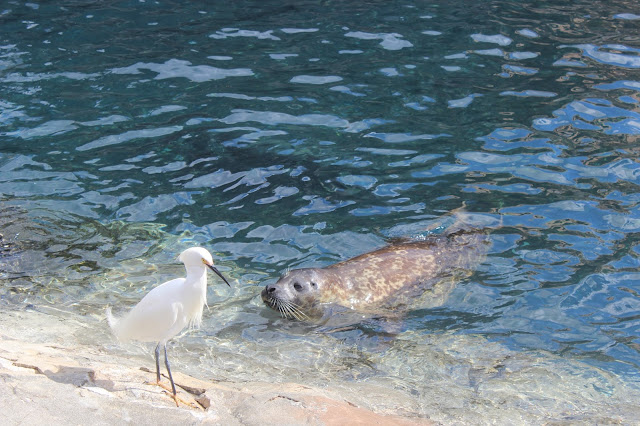 The birds hang around waiting to scoop up the fish the visitors throw.  The guide warned people to avoid the birds as apparently they are quite aggressive. 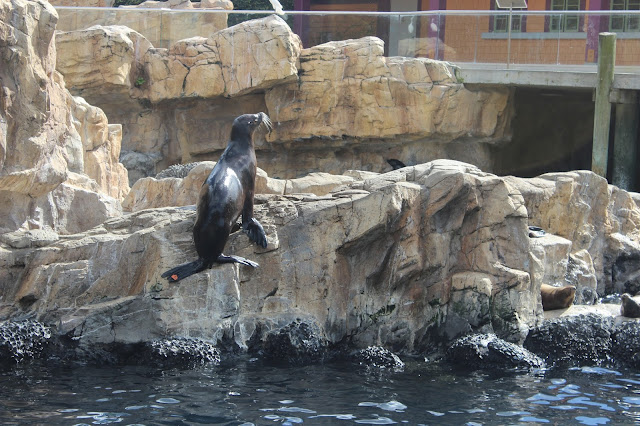 This guy used his flippers to climb from the water.  Impressive core strength!

The last show I visited was the sea lion show.  I didn't get there early enough to get a good seat, and the venue was quite shaded  so my photos are less than I would hope.  But here are a few. 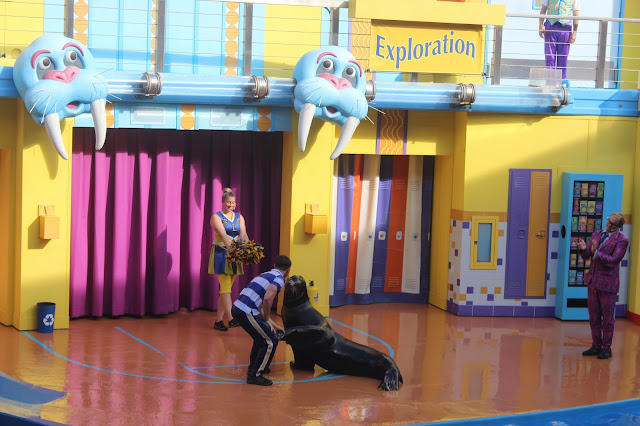 The premise of the story are the two sea lions are a few credits short to graduate from high school.  The show revolves around the various classes they need to pass and the misadventures that follow. (Cute but cheesy) 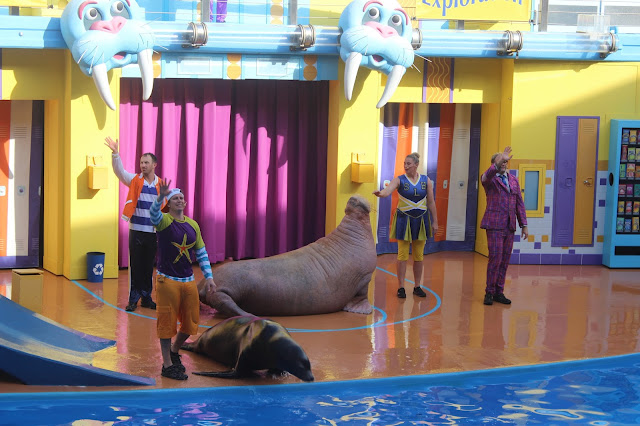 Of course, by the end they both manage to do what is needed and graduate.  If I remember correctly the walrus was the valedictorian. 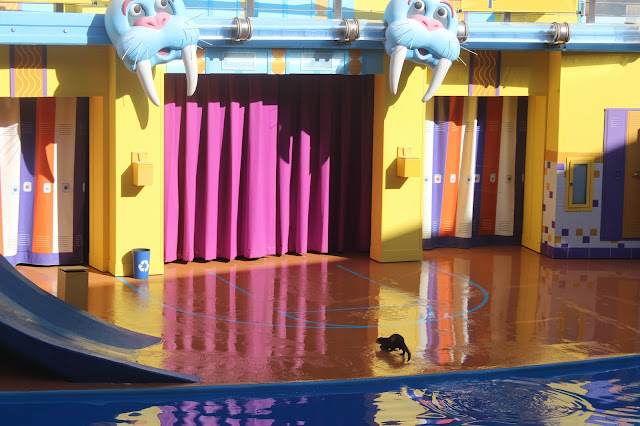 At some point during the show one of the humans "bought" a can of pop from the machine, drank it, crushed the can and tossed it into the pool.  From the bag of the stage came this little otter. It dived into the pool, brought the can up from the bottom and ran across the stage to toss it into the recyling bin.  (Missed on the first toss, got it on the second).  That brought the loudest applause during the show.After I left the show, I wandered towards the exit.  This is another shot of the roller coaster - it could be seen from almost every area of the park. 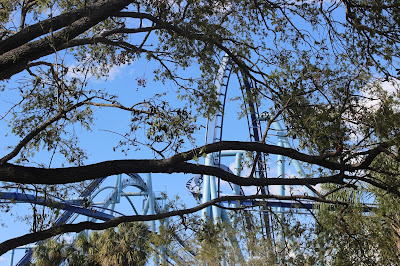 I stopped in at the shops on the way out and picked out some souvenirs, pens for my staff, a glass dolphin for my daughter and a bottle opener for my son.  Eli got nothing from SeaWorld because everything for little ones was ridiculously priced...besides I had t-shirts for him from Jamaica and Carters already. 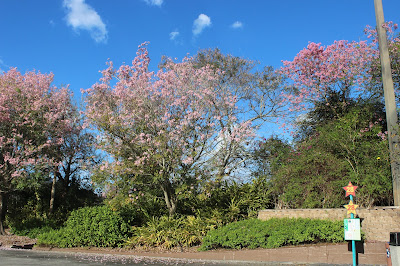 By this time it was nearly 4:30 p.m. and I was ready to head back to the resort (and the pool!).  The sight of the trees in bloom reminded me, it is spring....at least in Florida.

That evening I spent my time by the pool.  They have a cabana grill, so I bought my dinner and a beer and ate outdoors.

The next day was a travel day - another adventure but a fortuitous one as I arrived home an hour earlier than planned.  I took the following day as vacation and spent the day doing laundry and housework.  (My daughter's idea of cleaniless does not match mine).

So at this point, I'll end my vacation posts - it's about time, as I've been home for 3 1/2 weeks.  Just one more photo from the animal show. 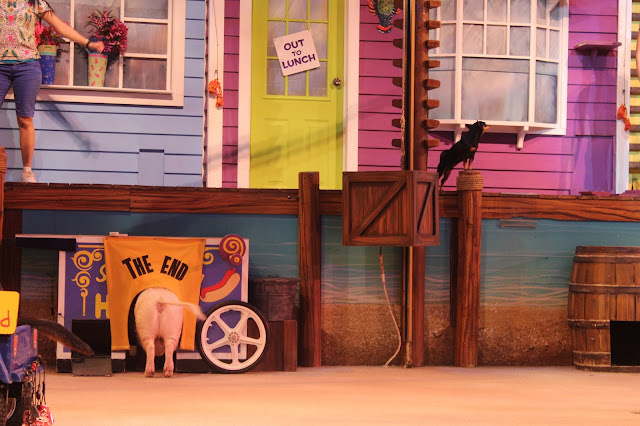 Posted by Maebeme at 16:55
Email ThisBlogThis!Share to TwitterShare to FacebookShare to Pinterest
Labels: great way to end a vacation, Orlando, SeaWorld, vacation