I arrived back at home on Tuesday, February 27, after a wonderful two week vacation.  Since I had limited internet access while I was away, I’m going to take you back in time with these posts (and pictures). I’ll preface the first post by saying, every time I travel I am reminded how fortunate I am to be able to do so.  To have both the time and the means to do so is something I will never take for granted.  So I won’t grumble about the fact that I lose a day on either end, since it takes that long (most times) to get “there” from here.

Wednesday February 14, saw me awake bright and early for my 6:30 a.m. flight (first flight of three).  I was worried that I would sleep through one alarm so set two of them for 3:45 a.m. which meant, of course, that I was awake five minutes before either went off.  The flights were uneventful – I arrived in Toronto about 10:30 a.m., was through customs and at my gate by 11:30 with boarding starting at 11:45.
We arrived in New York about 30 minutes ahead of schedule (1:30 p.m.) which left me with about a 3 hour layover.  I wandered the concourse looking for lunch – no real restaurant in sight – instead you use an I-Pad to order your lunch and someone brings it to you from some unknown location.  I ended up at a deli counter where fresh sandwiches were being made.  I ordered a ½ sandwich (roast turkey and Swiss) along with a bowl of the cheddar broccoli soup.  The sandwich was so large I only ate half and tucked the rest in my carryon for later.  I was impressed, too, as the roast turkey wasn’t the rolled stuff – it was true roast turkey...and the soup was the best I’ve had. Of course, I hadn’t had anything to eat since about 5:00 a.m. which may have colored my impression.

The flight to Orlando also arrived early; hooray for tail winds!  I had arranged transportation through the hotel (a third party company) and although the e-mail warned I could be waiting up to an hour, the shuttle was there within 10 minutes after I grabbed my luggage from the carousel.  It was dark by then so the drive to Cocoa Beach wasn’t scenic, but the driver (whose name I’ve forgotten), was very informative.  He lives in Cocoa Beach, and during the 45 minute drive he shared lots of information on the history and the sights of the area.  One thing I learned is there is no longer a statue (or perhaps there never was) commemorating the filming of I Dream of Jeannie and the street sign has been moved down to the other end of town.  Hence I didn’t bother looking for it.

Check-in at the Comfort Inn and Suites was quick and painless and I was in my room by 9:30 p.m.  I left home at 5:30 EST which meant I spent 16 hours travelling that day.  Despite the long day I was wide awake, so I watched some of the Olympics on television while munching on the other half of my sandwich.  By 11 p.m. I could no longer keep my eyes open, and I slept right through until 6 a.m. That might not sound exciting but I’m frequently up several times in the night.  I was up briefly, and crawled back in bed and slept until 7:30.

After cleaning up, I headed over to the breakfast room.  To be honest, I don’t think I had realized when booking the hotel provided breakfast…but they did and did it well.  Choices included, scramble eggs, sausage, fruit, cereals, bagels, yoghurt, toast, and DIY waffles.  Though it was difficult, I limited myself to just a few items.  After breakfast I contacted the front desk as the room safe wasn’t working properly.  The maintenance man came by and fiddled for a bit, eventually going away with it and coming back with a brand new one.  I was happy to safely tuck away my passport, extra cash, and debit card before I left the room.

By the time this was accomplished it was 9:30 a.m. so I headed back down to the lobby.  I’d noticed a sign indicating a regular shuttle to the Kennedy Space Center at that time.  I thought I’d likely be too late to catch it, but was fortunate as the driver was just outside when I called.  He had been waiting for four others but they never showed up, so Frank drove me to the Space Center for only $30 return (paid upon safe delivery back to the hotel).  He, too, is a local living in Cape Canaveral and during the drive provided lots of information on the Space Centre and what to see and do.  He texted me about 3:30 to see if I was ready to call it a day (I wasn’t) and when I called at 4:15 he was there to pick me up with 15-20 minutes. 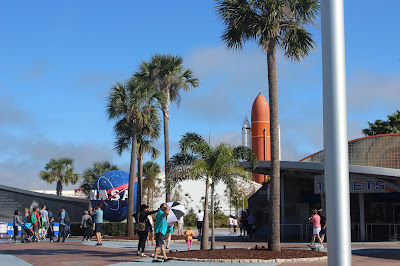 What to say about the Space Centre….wow!  It’s quite the place, part museum and part commercial enterprise.  Two private companies, Space-X and Blue Origin have set up shop and are busily working on current projects.  I don’t have many notes, so will use the photos as my guide.

The first show I attended was Journey to Mars: Explorers wanted.  This event provided some history of NASA and went on to discuss the possibility of travel to Mars with the goal of one day, having permanent settlement there.  The rocket that would get the space explorers there would have an inflatable habitat.  Upon leaving the earth’s atmosphere the habitat would inflate and provide living quarters, as well as the ability to grow plants for food (and to cleanse the air), and water purification, etc.  It all seems rather far-fetched to me….but they say it can and will be done….someday.  I’ll be happy to stay here on this planet but this was an appeal to the younger generation; I have no doubt some in the audience will have the courage to meet the challenge. 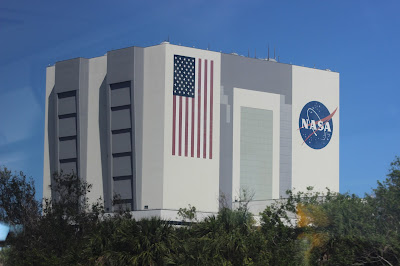 I also attended the IMAX theater on site to see a documentary "Journey to Space 3D".  It was very interesting, and sad too, watching the film of the failed missions and acknowledging the lives lost.  After the theater I grabbed lunch at the large cafeteria and headed to the bus stop for the ride around the grounds.  This took close to 2 hours.

This is one of large buildings (photo taken through bus window).  If I remember correctly, the flag is 27 stories high!

The next photo is of a piece of equipment that is used to move the rockets from the building next door to the launch pad. 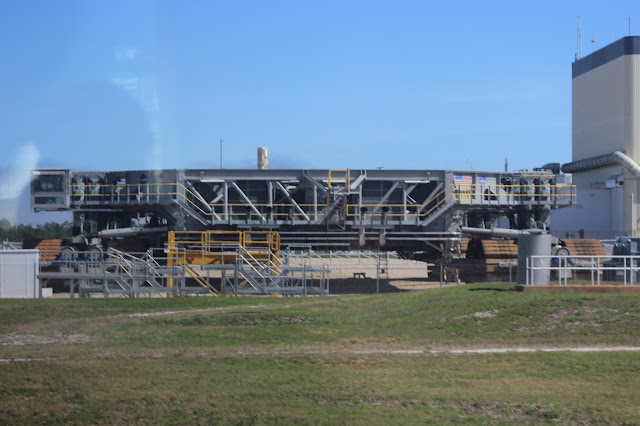 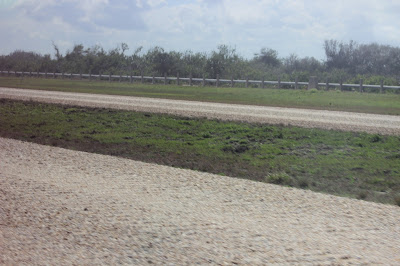 The Centre tour starts off with a film covering some of the history of the Apollo missions.  Then we were allowed to move into the main areas of the building and wander about as we pleased.  I was so busy looking about that I didn't take many photos. 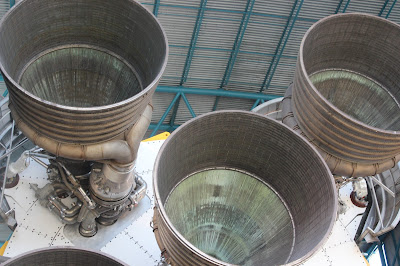 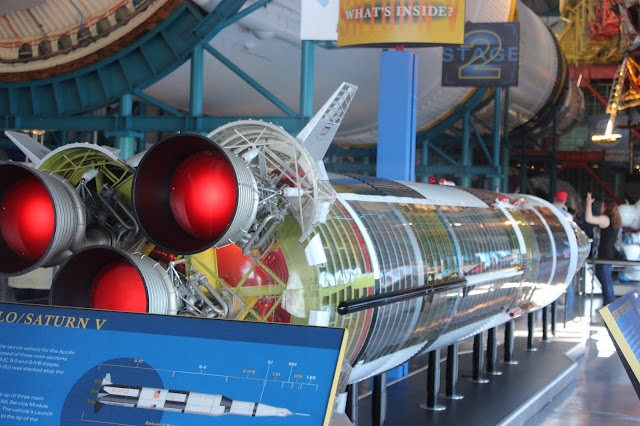 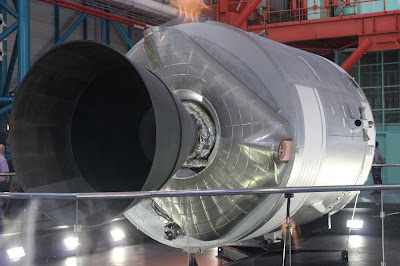 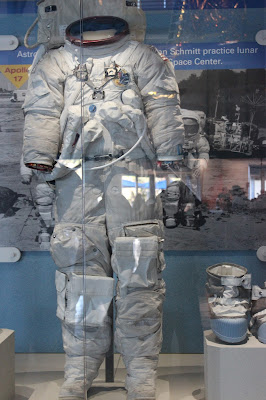 I was most interested in the space suit.  If you look at the feet, you'll notice there is dust - it was indicated this is actual moon dust.

Beside the space suit (which was glassed in) was a piece of moon rock.  It certainly didn't look like I expected it would as it was black and shiny.  It was merely a sliver of a piece of rock. 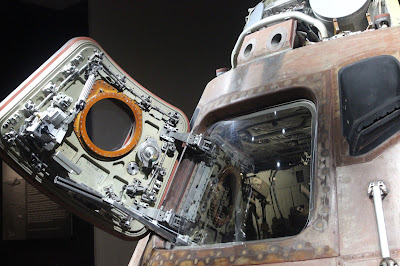 I don't recall which space craft this is - it was a smaller so I'm assuming it was one of the earlier versions.

You can see some of the damage on the exterior from re-entry into earth's atmosphere (and I assume some from the launch as well). 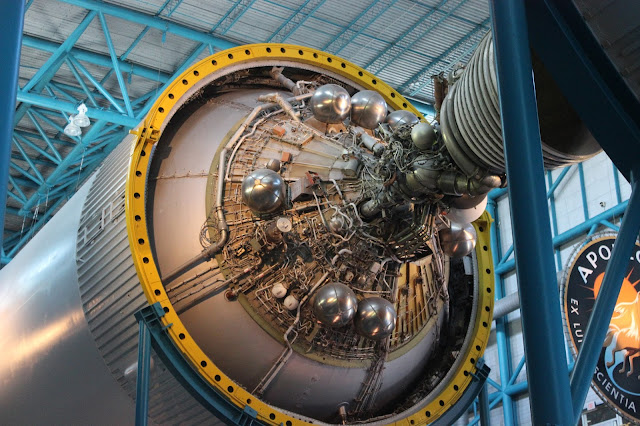 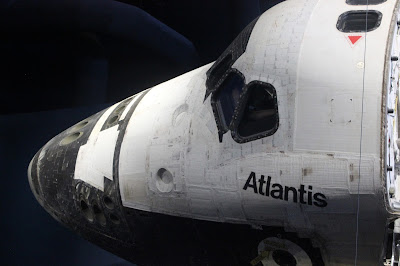 Back at the visitors site, I went to the Atlantis building.  This tour also started with a film, but I was tired of standing in a dark room for 15-20 minutes so asked if there was a way to simply see the exhibits...there was through the gift shop!Again, I was so engaged in seeing the exhibits I didn't get a lot of photos.

This next shot is of the Canadarm. I have some vague memories of when it was built and the pride that we were involved with the space station and space exploration.  Of course, we've had several astronauts (Roberta Bondar and Chris Hatfield come to mind immediately). 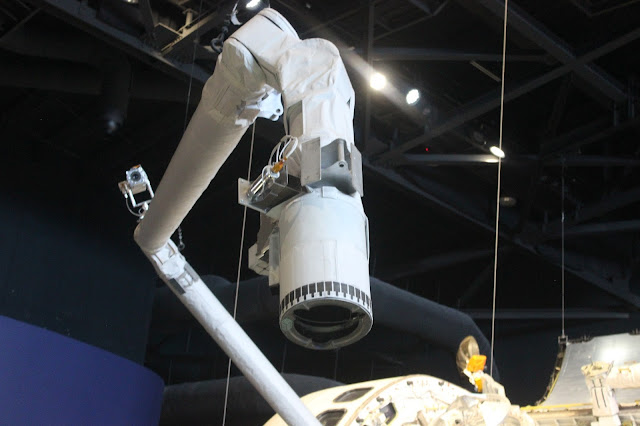 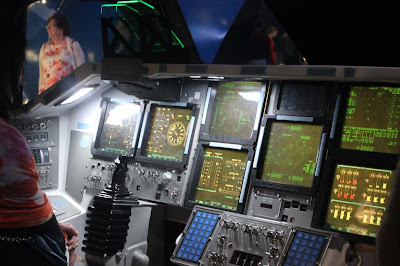 There was an opportunity to sit inside a model of the space craft.  It was a popular exhibit! 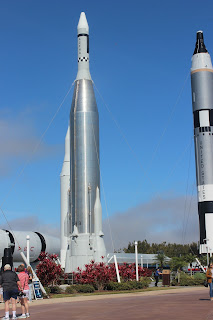 The rocket garden is exactly that, with 10 or 12 rockets on display.  The guide walked us through the garden, explaining which program each belonged to and the impact the mission had.  I wasn't taking notes, so to be honest, I don't really remember much of the details.

I do recall her talking about John Glenn, his first foray into space - he was the first American in space.  She also advised that he was the oldest person in space, in the Discovery space shuttle, at the age of 76.  (I had to look this up in Wikipedia).

It was definitely an interesting day, though as I posted on Facebook I suspect a 10-11 year old would have enjoyed it even more.  I can see how it would inspire a young person to dream of what could be. 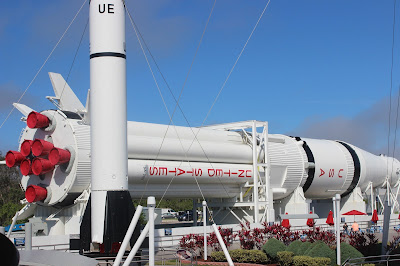 After my return to the hotel, I dropped some things at the room, and headed down to the beach.  As this is a long post, I'll leave you with this photo.  More to come! 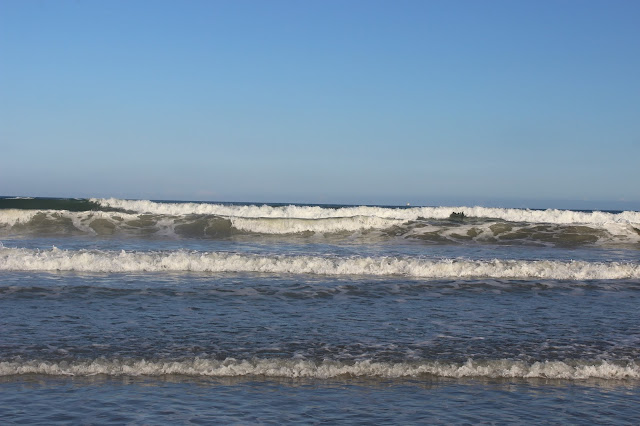