Well, that didn't end well.  Our football team, the Saskatchewan Roughriders did not win the West Division final, so we're not heading to the Grey Cup this year. :(  Oh well, like many other things in this world, there's always next year.  It does leave me in a bit of a conundrum.  Who do I cheer for this weekend?  The Hamilton Ti-Cats from the east, or our nemesis, the Winnipeg Blue Bombers from the west?  Decisions, decisions.  (To be honest, I really won't care, as long as it is a well played game).

In the meantime I've been watching some of the European curling championships. TSN has been kind enough to televise the afternoon draw (early morning for me), and since my regular programming has been disrupted by the impeachment inquiry hearings, it's been a blessing.  Is anyone watching those hearings?  I'll wait for the sound-bites myself.  If I understand the process correctly, it will not matter if the Congress does decide to impeach, the Senate can decide not to hold a trial.  Since the upper Chamber (is that a Canadian/English term) is held by the Republicans, this might all be for naught.

On the home front, this has been a week of house cleaning. (Except when I'm watching curling, of course).  I must admit I've let things slide a bit, so went hard to try to get the house back into "showing" condition.  Once exception, my side table in the living room.  Earlier this week it held the two beanies I made, a finished mitten, the pattern for the mitts, two remotes, a ball of crochet thread and a partially completed snowflake, a notebook with the list of my Christmas baking, two napkins, and my cup of coffee.  I did clear some of it, but even now it's a mess because I've added another small project, the pattern book, and my hand lotion. Do you have an area in your home that's a catch-all?

I did not go out to visit D and Eli after all.  She decided it would be best for me to wait until next week.  By then the decisions on her insurance claim should be made.  Maybe, just maybe I'll get to help her pick out the new flooring! 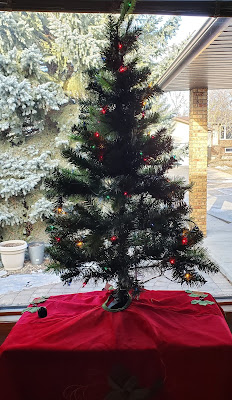 So I did a bit of on-line shopping instead.  I ordered this little tree from Michaels and picked it up the following day in store.  It's not as full as I would have liked but once I play with the branches a bit more and fill in the gaps with decorations I'm sure it will look quite lovely. I had gotten rid of the large tree I've had for years last spring during my purge.  It was pretty ratty and quite heavy.  This one I can carry and put together easily. I even paid attention to how it came out of the box, so am hopeful I'll be able to fit it back in for storage.

I resisted the urge to buy more yarn at Michaels while I was there, though did pick up some fabric stiffening spray.  When/if I ever finish crocheting these snowflakes I'll use the product to starch them.

On Thursday I popped over to Superstore.  They had family sized packages of chicken breast ($2.98/lb) and lean ground beef ($1.98/lb) on sale.  I've got chicken for that price before but not ground beef.  I broke down the packages into smaller portions for freezing.  Remember how I was going to empty out the basement freezer?  Yeah, not so much.  Maybe after Christmas.  While I was doing my wander about th store* I came across a package of 4 Paw Patrol board books on sale 30% off.  I couldn't resist.  Eli loves to be read to and is a huge fan of the puppies.  And G'ma loves to cuddle with him so it's a win/win. 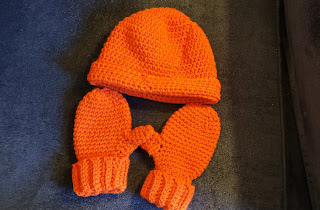 I did get his mittens finished and will find out for certain if they fit when I drive out to visit on this upcoming Tuesday.

Another near finish, on Saturday as I watched the finals of the European championship curling, I managed to get the majority of my Christmas gifts wrapped and labelled.  Glad I did as I'm missing two Santa gifts that I'll pick up later this week...no shopping allowed after December 1st, except for a few groceries.  I've reached my financial limit and I'll avoid the crowds too.


Today, I'm puttering about, watching a bit of PVR'd television, working on my knitting project, and waiting for the Grey Cup game to start.  That won't be until early evening though the pre-game starts at noon. (I won't be watching all of that program!)  I've been out to feed the birds - it's just around the freezing mark so for late November not a bad day at all.  I should go for a walk but I probably won't.

*I like to think I wander the aisles to get my steps in.  But really I love browsing.