Anne from Cooking and All That Jazz had a post last week in which she shared a baby photo and a memory from her childhood.  She asked if her readers would post as well so she could get to know us better.  I'm answering that post, and sending it out to the rest of you - perhaps you'll share a similar post with your readers (which includes me!).

Since I have my maternal grandmother's and my mother's photo albums I figured I should be able to find a couple of old photos.  I found three that I will share with you. 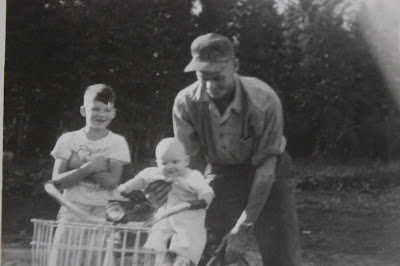 This is the earliest photo I could find.  I suspect this was my older brother M's bicycle and my dad is giving me a ride. If my memory serves, that bike became mine when I was about 8 or 9. 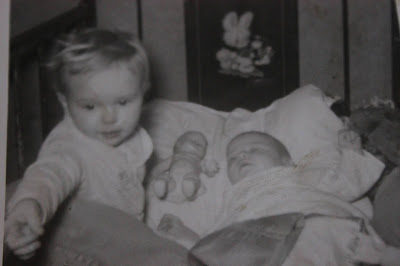 In this photo I'm probably 20 months old or so.  My sister K was born before I turned 18 months.  We shared a crib, and later a bed until I was about 10 years old.  My older brother left home then, and a bedroom opened up for me.

This last photo is the one that evoked the happiest memories for me.  My sister and I are having our Saturday night bath in the tin tub on top of the kitchen table. 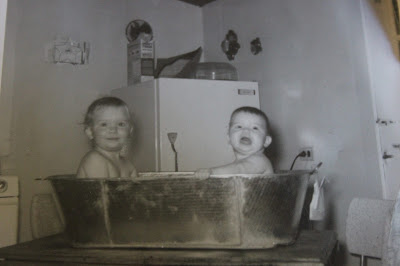 I grew up on a farm without running water.  We had a well for drinking water, and we collected rain water or melted snow that was kept in a large barrel in the porch. There was a slough down the road too, that provided water in the spring and fall.  We'd take the tractor with a barrel on a stoneboat behind it, and Dad would pump the water into the barrel. We always said, if we wanted running water we ran and got it.

There was always a canning pot of water on the stove or the oil burner that heated the kitchen. The hot water was added to the cold for washing hair, doing dishes and having baths.  Bathing the entire family was a bit of an ordeal.

First, hot and cold water were mixed in the tub and the small children were bathed. There was a photo, that I haven't been able to find, that has the three of us in the tub.  (My younger brother R was born 17 months after K - my mom had 3 children under the age of 3!).  Then more clean water was added and my older brother M had his bath - in the privacy of the room that held the toilet*.  As we got older we moved to the bathroom as well, with the least dirtiest child going first, and the dirtiest getting the most water.  By this time, M had left home.

But the best thing about Saturday night was not the bath, but popcorn! For a lot of Canadians, Saturday night was "Hockey Night in Canada".  My older and my dad always watched the games.  M cheered for the Montreal Canadiens, while Dad cheered for the underdog.  At that time, the Canadiens were a power house in the league and Dad always said they'd won too often. I don't recall there being any real arguments but they definitely were on different sides.

When we were done our baths and wearing clean pajamas, Mom would make a big batch of buttered popcorn on top of the stove.  We'd take our cereal bowls of popcorn into the living room and sit with Dad and M.  I recall how good that popcorn tasted and what a treat it was to stay up late - though I suspect it wasn't as late as I think it was.

We got running water when I was 17.  Dad had dugout put in, and had the water piped into the house.  Our drinking water still came from the well. My cousins often talk about using the hand pump to get drinking water.  I didn't think it was such a big deal but then they never had to carry the pails of water into the house.

When I left home, I moved up north and while there was a bathhouse, it was closed in the winter.  So the tin tub was pressed into use again.  Like my parents I melted snow in a canning pot on top of an oil burner.  I'm not sure what happened to the tub when I left a couple years later - I assume I gave it back to Mom and Dad.

What a lot of memories a single photo brought back!  Hope you enjoyed reading them.

* The toilet was a 5 gallon pail inserted in a larger pail with a toilet seat on top.  Chemicals were added to keep it from smelling bad. It got dumped in the outhouse every morning or more often if it filled up. That was the job I hated the most, thankfully Dad did it most of the time.

Posted by Maebeme at 11:55
Email ThisBlogThis!Share to TwitterShare to FacebookShare to Pinterest
Labels: childhood, memories