I'm almost back to normal after this cold, but of course, now my son is feeling under the weather. By mid-week he was experiencing significant pain on the side of his face when he sat for more than an hour or lay down.  As a result he wasn't getting much sleep.  He was able to arrange an appointment on Thursday afternoon to see a doctor.  After a cursory examination the doctor suggested he has an infection but not an ear infection and he was given antibiotics.  He did get some sleep that night and was feeling some better on Friday morning, not well enough to go to work though.  He has next week off, so will have the time to recover.

C had slept through Thanksgiving dinner on Monday and through the entire night.  He's not a big fan of leftovers so I ate pork roast, mashed potatoes, stuffing and gravy for a few meals.  But even I couldn't finish the entire roast so I've frozen it and plan to repurpose it into a casserole or something for later. Any ideas?

I spent much of Thanksgiving Day indulging in things that I enjoy. Live curling events were available on both Youtube and Facebook, so I watched four games in total.  There would have been at least one more had the Alberta team (Koe) won their quarter final game as they are providing the live stream of all of their games.  The other three games were out of Ontario, semi-finals and finals for the men's teams and the women's final. Neither of the teams I had anticipated would win did...shows you how much I know.  The Ontario rules required the players to wear masks on ice.  If you're not familiar with the game, a player throws a rock, another player (or two) sweeps that rock while the skip calls out directions.  It is a physically demanding game, even if my description doesn't do it justice...maybe google it if you're interested.  The announcer mentioned that the players are getting accustomed to it, and one suggestion was to have one or more extra masks available.  Apparently it is the moisture that accumulates that makes it feel like it is difficult to breath at times.  Good tip for anyone who has to wear one for an extended period of time.

While watching the curling and later in the evening, I continued knitting Eli's toque and did a bit of cross-stitching.  I actually frogged back the toque one more time (on Saturday) and I'm finally happy with the way it is working out.  I'm sure I'll have it ready to wear by the time I head out there this weekend.  I'm planning to take his sweater with me too, it still needs to be sewn together, a collar and buttons added but that will give me a project to work on while I'm there.

Tuesday finally brought back a more normal level of energy.  I stripped the bed, gathered up the towels from the bathrooms, grabbed the laundry basket and four loads later I had everything washed, dried and put away.  While the machines were doing their work, I set to tidying up the house.  When I'm not feeling well, a lot of stuff tends to get set down and not put in their proper place.  Just clearing off the surfaces and giving them a wipe down makes such a difference!

I had time between loads to get out for a walk.  It was a cool morning, just 6C (43F) with a cool breeze.  I fought the wind on my way out and when I turned to come home it felt good to have it at my back.  There were no ducks remaining at the creek, no cormorants at the pond, but still lots of geese.  I stopped at one point to suggest they might want to start heading south because there is cold weather coming this week, with precipitation that might turn into that dreaded four letter word.  They didn't listen.

My energy level continued through Wednesday; I got the entire house vacuumed and went for a walk.  It was quite cold, 2C (36F) but with the windchill feeling more like -4C (25F).  I came home rosy cheeked but had bundled up with a toque, gloves and a warm jacket. The sun was shining and it was a beautiful day.

Thursday morning, I baked some buns and made chili for dinner. I'm a wimp and it was far too cold to go walking early in the day. It hadn't warmed up much in the afternoon either, so I did my walk in the basement while listening to a podcast.  You won't be seeing any photos because there is nothing interesting down there. :) The cold weather is definitely here!  I just hope it doesn't stay, and we get a few more days of warmer weather.  I noticed, even at nearly 11 a.m. the frost on the neighbour's roof hadn't yet burned off.  Later in the day I even saw a few of the white flakes floating through the air out the front window.  I'm so not ready for that!

I'm planning to head out to visit Eli and D tomorrow for a couple of days, so will wrap this post up today.  We had a heavy frost last night, temperatures dropped to -10C (14F).  I went out to feed the birds after breakfast - there wasn't a speck of seeds left in the feeder.   A little later I drove over to Kal Tire to have my tires re-torqued, stopped to get gas at Co-op and then picked up a few groceries at Safeway.  That's my "outing" for the week!

Just one photo this week. D sent the picture to me yesterday.  Eli's first pre-K craft!  I particularly love the placement of the one eye. :) 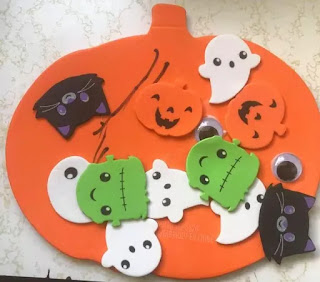 Have a great weekend everyone, take care and stay well.