October comes in with a bang

October has arrived bringing cool temperatures but thankfully, so far, no hard frosts.  The water in the bird bath did have a bit of ice in it this morning, though.  I still have a few containers of flowers out and I expect I'll pull them today or tomorrow.  A FB memory popped up on Sept 29th that showed we had a bit of a snow shower last year (melting as it hit the ground).  I'm grateful there isn't any snow in our forecast yet.

In advance of the changing weather, I had my tires changed over on Tuesday.  When I called for the appointment, I was told that bringing it in before the end of September would garner me a $25 discount.  Woohoo...of course, what they didn't tell me is they've raised the prices so the difference was minimal.  Oh well, it's done and I learned that both sets of tires still have at least 50-60% tread left.  As little as I drive these days I'll probably not have to buy new tires for a long time yet.

I walked to and from the tire shop - it's only a 15 to 20 minute walk from the house and had my camera with me.  The geese continue to gather at the pond and this day I spotted what appears to be one-legged goose. 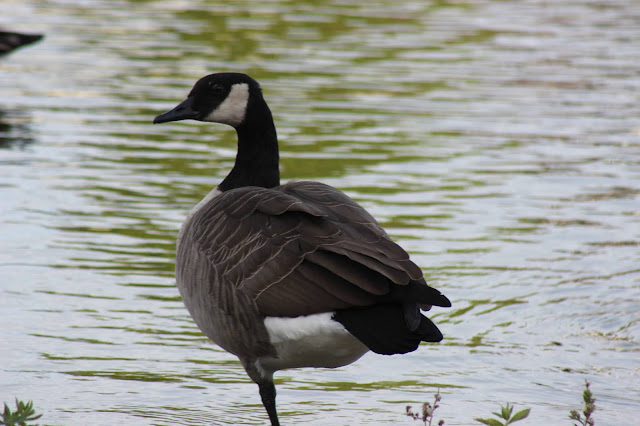 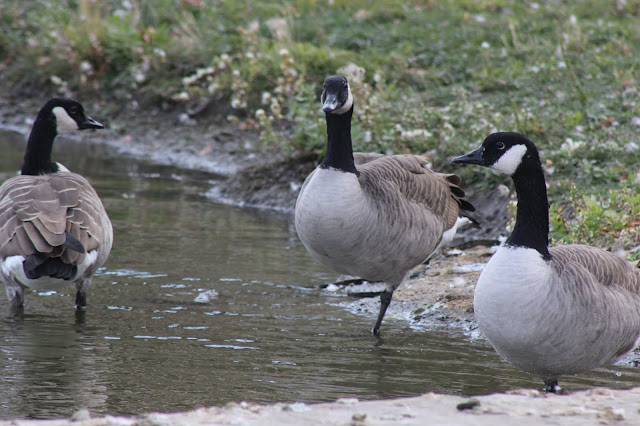 Here's another angle, if it was holding up a leg (which I've seen them do, especially when it is cold), I couldn't tell.  It apparently doesn't affect its ability to feed...that's one fat goose! 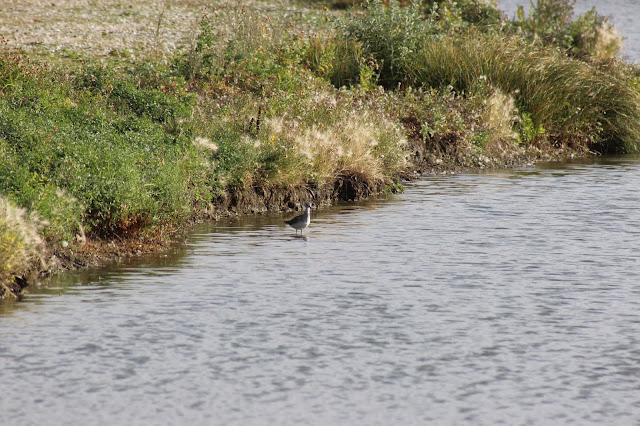 I've not seen the Godwit at the pond before.  I just think these little birds are so interesting. The cormorants are there occasionally still but the ducks are gone except for a few remaining at the creek.

It was cool, just 3C (37F) when I woke on Wednesday, and not much warmer when I went for my walk.  But the day was sunny, I bundled up and wore a pair of mini-gloves and was fine.

The ducks and Godwits were busily feeding in the sun.  I'm thinking the water must be pretty chilly!
D and Eli arrived on Thursday morning and after some additional breakfast - that kid can eat!, we headed out for a walk. 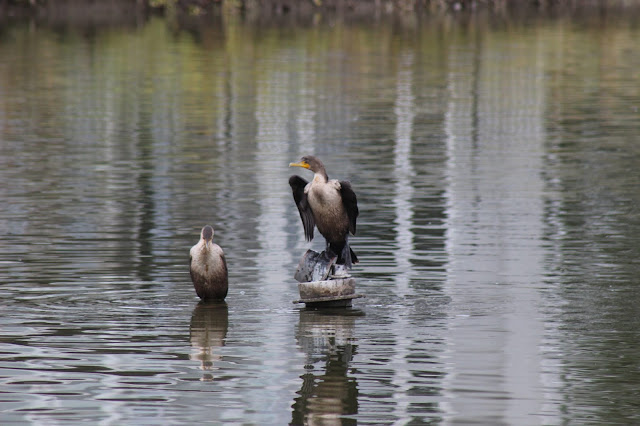 I don't recall the cormorants having this much white on them.  I wonder, do they change color like our bunnies?  Time for some research. 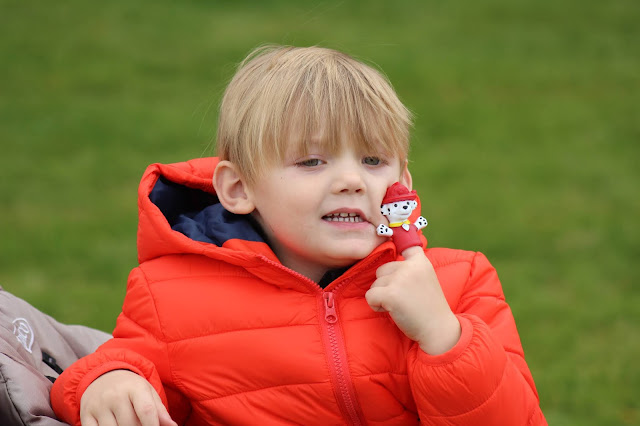 Eli was showing off his Marshall finger puppet.  If you've no small children in your life, you won't be familiar with the Paw Patrol, a group of pups that turn into heroes rescuing people and animals from all sorts of trouble.  Marshall is the loveable clumsy pup who (obviously) is in charge of the fire truck. My friend K gave me a set for him, and he absolutely loves them.  On our way home we stopped at the park and he enjoyed running up and down the hill, and playing on the equipment.
Thursday night was a long one for all of us.  Eli started showing signs of an ear infection - covering his ears with his hands, rubbing his face and lots of whining. He was awake off and on all night - at one point he asked to cuddle with G'ma but he continued to sleep fitfully.  Thankfully D had an appointment with her G.P. on Friday morning so was able to get a prescription for antibiotics. The pharmacy was backed up but she was able to pick up the meds about 2:30 p.m.  We gave him a dose immediately...much against his wishes.  By 4 p.m. he was fast asleep on the couch, slept through dinner, and woke about 7:30 p.m. happy and hungry.
I kept him up with me, while his mom went to bed about 8.  At 10 p.m., I tucked him into bed with her and except for a bathroom run about midnight, and a request for a drink of milk at 3 a.m., he slept well. His nose is running like a faucet - the meds seem to be working. D has a sinus cold as well so she was happy for the sleep.  They headed home early this morning and I expect they'll spend the next few days resting.  He won't be attending pre-K until he gets over this cold/infection. 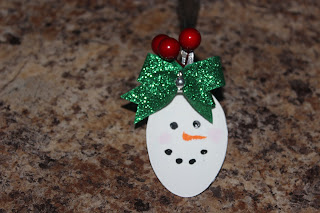 Yesterday D and I did a bit of crafting - I'd seen a video on FB and decided it would be a fun and easy project for the two of us to work on.  I picked up ten spoons and several bottles of paint at the thrift store, and the bows and berries at the dollar store.  D brought me some white paint as I couldn't find any.  While Eli was sleeping we finished the painting and this morning I added the bow and berries to one.  D took her spoons home (with bows) to finish off at home.  She plans to add these to jars of brownie mix as Christmas gifts for the teachers at pre-K.  I'm not sure what I'll do with mine but I did think they were cute so I'm sure I'll find a place to display them.
Today, I'll spend some time tidying up, putting toys away, washing sheets and other laundry, and just generally setting things to right. It should be warm enough for a walk this afternoon too. And I won't be surprised if there is nap at some point too.  We're forecast for a lovely day tomorrow so I'll hold off on the yard work until then.
Take care everyone, stay well, and happy October!
Posted by Maebeme at 08:38
Email ThisBlogThis!Share to TwitterShare to FacebookShare to Pinterest
Labels: cormorant, crafting, geese, grandson, marbled godwit, sick, weather