Ugh...it wasn't the start to the week that I hoped it would be.  D and Eli went home on Saturday and I started to feel ill that evening, just a tickle in my throat. Sunday, my throat got more painful as the day went on and my head started feeling stuffed up.  By Monday morning, I was feeling absolutely horrid I spent most of the day in bed.  By the end of the day I'd used up a half bottle of Buckleys cough medicine (yuck), a box and a half of tissues, several lozenges, a scoop or two of Vaporub, two envelopes of Neocitron, and two tabs of Tylenol extra strength cold and flu meds (one day, one night).  I was pretty much throwing everything I had at it, with the hope I'd get over it quickly.  I woke a couple of times through the night, to take more cough medicine and to blow my nose.  By morning, I wasn't as fuzzy headed but had that darn barking cough.

I kept up the regimen for the day, more cough medicine, the Tylenol for the sinus pain, and Neocitron before I went to bed at night.  Because I felt like I'd been penned up for a week, I went out for a short walk.  The fresh air was definitely good for me, though I was pretty much exhausted by the time I got home.  The rest of the day was spent mostly relaxing though I did get started on these little ghosts for Eli. 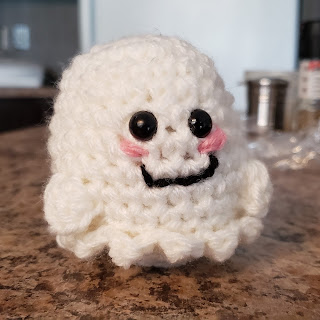 D asked me if I could find a pattern to make "pooping" ghosts.  I thought I'd have to adapt this pattern, but quickly realized that leaving the bottom open would leave enough room for her to stuff a mini chocolate bar into it.  They are having a mostly at-home Halloween this year.  They'll decorate the house, he'll wear his costume (a pirate), and she'll hide candy for him to find.  Her friend F has invited them to join her family for a special Halloween dinner, and D and Eli will stop at the neighbour's on either side to trick or treat.  Some Halloween cartoons will likely be watched as well.  Eli is young enough to not realize this isn't the norm and I know he'll enjoy himself.  The little stinker has already found the box of treats - he definitely knows what those are about.

I slept much better on Tuesday night, so woke Wednesday feeling much better.  Still a little congested but not feeling the need to dose myself up.  But damn did my muscles hurt from coughing.  Guess I need to work on that core a bit more.

It was a beautiful morning for a walk.  Since I hadn't taken my camera with me for the last few days I grabbed it on my way out the door.  I'm glad I did. 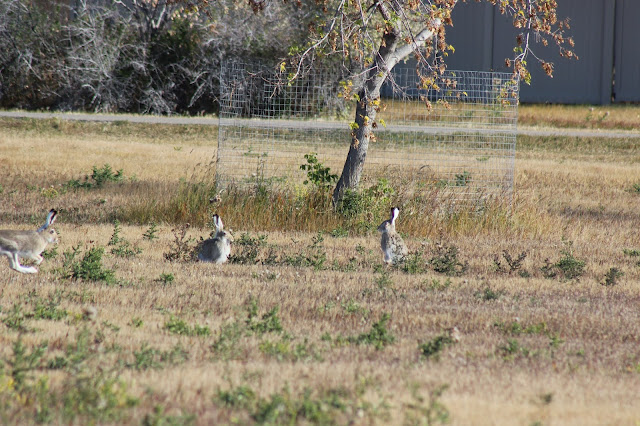 As I snapped this photo, the jack rabbit on the left came bounding into the shot.  I wish I'd been a tenth of a second later but I laughed as I saw it flash on the screen. 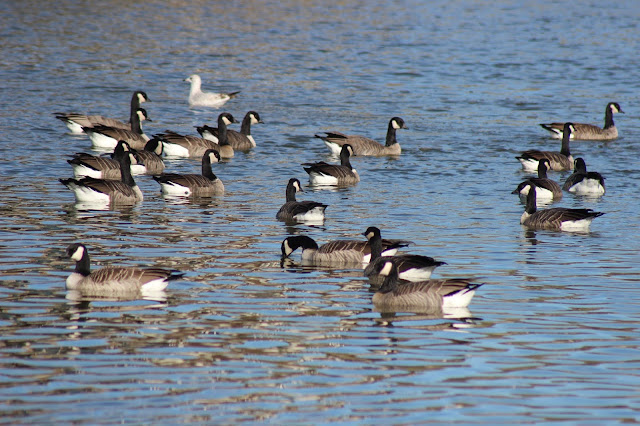 There were hundreds of geese on the pond today.  Just a solitary duck on the creek, and one cormorant. My brother R says most should be heading south my mid-October.
I know I'm preaching to the choir, but this new blogger is sure a nuisance when it comes to placing photos where I'd like them to be. It used to be I could drag and drop them in place but that no longer seems to work.  And then there are the darned changes in the size of the font.  I don't know how many times I've had to correct it through this post. 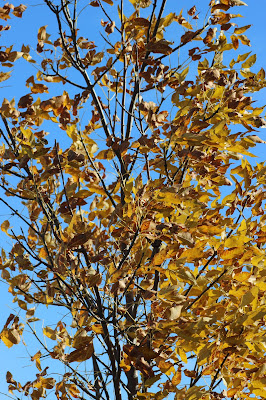 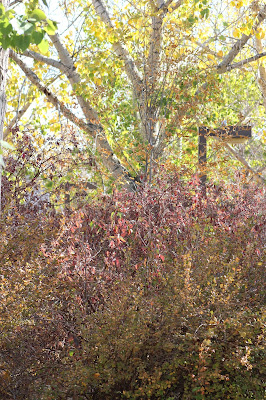 I took these photos intentionally to print and use in a frame with openings for four photos that is hanging in the main bathroom.  The current photos are from my last few cruises and I think I'd rather have something else to look at - there won't be any cruising in the near future.

The next photo is my very favorite of the day. We don't have a lot of red in our fall colors since we don't have any/many maples. This grape vine provides it instead. 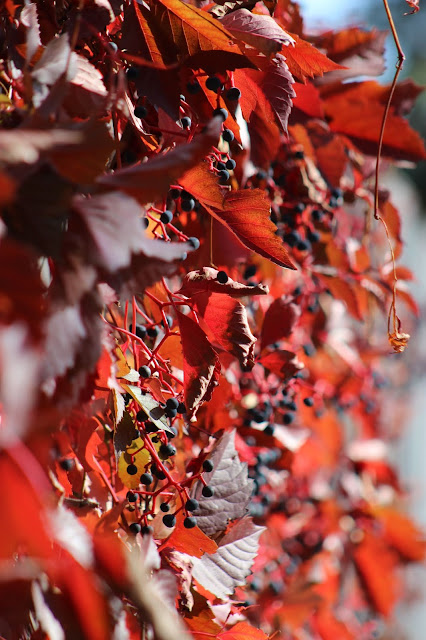 By Thursday I was feeling much better, although still coughing, my head felt clear.  I don't know if it was the cold, or the amount of meds but the day before I'd caught myself putting the clean cat bowls in the fridge instead of the cupboard where they belong.  When I tried to start knitting a toque for Eli I had to tear it out three times as I kept making mistakes.  On Friday I looked at it again and realized it still wasn't right so I've started again with an easier pattern.
With my head cold seeming to be at bay, I did get out of the house on Friday, to pick up cat food, bird seed, and a few groceries. I went early when the stores were quiet and was home and putting things away in just over an hour.  The weather was cool, but with a forecast of 24C (75F) for Saturday I decided to leave the containers of flowers just one more day. We're going to get colder temperatures next week so I guess, whether I like it or not it's time to pull them up and put away the patio furniture.
Today I still woke up congested but am feeling better through out the day.  It's a windy and sunny day here with the temperature forecast having been revised to a degree or two cooler. I got out in the morning and finished clearing up the flower containers as well as putting away the last of the garden ornaments and patio furniture.  I will admit it made me feel a bit sad.  Everything looks so barren and lacking in color except for a few trees that are hanging onto their leaves (and the blue sky).
I probably should mention I'm certain this isn't Covid - I haven't had a fever or any body aches, just the congestion, coughing and sneezing.  Nor have I have I felt short of breath, well, except after a coughing fit.  But nothing abnormal from having a cold.  In any event I'll be glad to be over it.
This is Thanksgiving weekend here in Canada. I won't call it a long weekend, because since I've retired, every weekend is long. :)  I'm cooking a pork loin roast for dinner on Sunday, as it will just be my son and I, as D and Eli will be on their own.  They were here just over a week ago so it makes no sense to have them travel again.  I'll visit there next weekend and spend a couple of days with them.
Happy Thanksgiving to my Canadian readers.  To all, take care and stay well.
Posted by Maebeme at 15:54
Email ThisBlogThis!Share to TwitterShare to FacebookShare to Pinterest
Labels: autumn, crafts, Happy Thanksgiving, sick, walk