I'm doing one of those shake of the heads things again today.  It's Thursday as I start this and it was just Saturday a minute ago.  I know I'm on the down slope of life, but seriously I can't believe how quickly time is passing by.

On a happier note, we had a nice visit with D and Eli on Sunday, and Monday morning.  The three of us went out walking both days as the weather was perfect.  Eli loves to see the geese and the ducks on the pond though was a bit confused when I told there were no babies now.  He made me laugh, at one point D and I were going back and forth as to whether a bit of white on the pond was snow or a piece of plastic when Eli turned to us and said, "that's enough you two".

On the way home each day we stopped at the nearby park.  On Monday, the workers were busy replacing the wooden retaining walls with concrete blocks.  Eli didn't mind that he couldn't play on the equipment.  Instead, he ran around on the small hill, eventually rolling down it when it was time to leave.  I didn't get a video of the roll but here's one of the little guy doing what he does best on the top of the hill, running, spinning and chattering to himself.

Oh, and earlier at the house I wanted to try the new mittens I'd made on him, and I mentioned to D that I hadn't yet made the idiot string.  Eli turns to me and says, "I'm not an idiot."  No baby, you sure aren't!  It amazes me that he has an understanding of what idiot means and knows darn well it doesn't apply to him.

While they were here, D and I made a run to Costco to pick up a few things, while Eli hung out with Uncle C.  Those two enjoy each other's company so much.  At one point, C had a Baby Shark Halloween cartoon playing on his computer and the two were cuddled in the chair watching it.  Eli also helped me make C's birthday cake (a box of browning mix), and after it was iced, we put enough sprinkles on it that it was difficult to cut!  Eli helped sing Happy Birthday too and while birthdays are not a big deal to C, I'm sure he enjoyed it.

On Tuesday, after doing some tidying, my walk, and some knitting I settled in to watch the results as they came in on the U.S. elections.  I actually stayed awake until 2:30 a.m. before I finally said enough. There was obviously not going to be winner that evening, despite Trump's assertion that he'd won.  Yes, I know I'm Canadian and have no real stake in the results, but there are consequences for our country as well regardless of who is elected.  And who would have thought that four days later there will still be no called decision.

I thought I'd be ready for a nap mid-day on Wednesday but I didn't.  No walk was taken, but I got a few things done around the house and caught up on some PVR'ed television programs while knitting or stitching.  I was excited when my early Christmas present to me showed up!

I've been wanting a rug for the living room for a long time but had never found anything I liked.  On one of the home renovations shows I watched, I spotted one I thought would work, and although I found it through the marvels of the interweb, the cost was prohibitive.  But after scrolling several options I found this one and I love it! The rug is a low pile, but so soft and nice on the feet.  There is no insulation in the basement ceiling in this portion of house so the floor often feels cold in winter.  I rarely wear socks in the house so the rug is a welcome addition.

The mess on the side table to the left of the couch are the three projects I'm working on and in front of the chair is my little table that I pull out to put the laptop.  The latter gets put away behind my chair when it isn't needed.  Saku is loving the ottoman beside the chair and has spent hours napping there...which he didn't do before. Although he's difficult to make out, Sasha is sleeping in his spot on the right hand side of the couch.

I walked again on Thursday, no photos this time, and enjoyed the sun and warmth.  I know it isn't going to last and Friday was definitely cooler. I did get my walk in by walking inside the house, and spent a good part of the day working on my projects watching curling!  Between Facebook Live and You-tube I managed to catch 3 games.  I did a bit of knitting, a bit of cross-stitching and some crocheting. Perhaps it is time to focus on one and get it done.

Today it is colder still and to be honest I'm hoping it gets even colder.  We are forecast for freezing rain on Sunday before the snow starts falling later in the day.  That will leave a layer of ice on our roads and sidewalks that won't disappear until spring unless we get some mild weather over the next few weeks.  The main roads will be taken care of by the city but our residential areas rarely, if ever, see a snow plow.  Even the year we had over a foot of snow pack on the street - during the spring melt the ruts were deeper than my rubber boots, it took several calls to the city to convince them to come out and clear it.

I've no big plans for today, just more of the same - a bit of housework, watching curling, working on projects, and walking in between.  It's still a wonder how time goes by so quickly when I'm in such a slug mode.

On that note, I'll leave you with a photo of last night's sunset out at the farm that my brother R sent me. 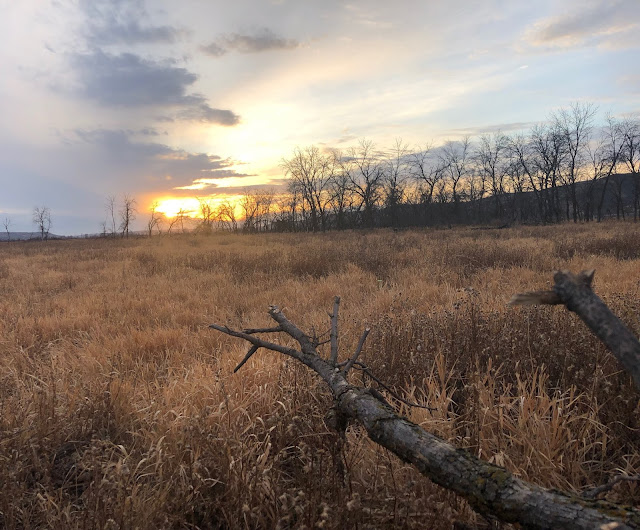 Take care everyone, stay well and have a great week!