It's been another week of weather - isn't every week you ask?  Well, yes that's true, it's just been an up and down week that kiboshed some of my plans.

I started off the week in the best way, getting my second COVID vaccine.  This time I didn't have to wait in the drive-through, I had an appointment for 8:30 a.m. at the mega clinic.  When I arrived there were about 12-15 people waiting in line ahead of me, and although the doors were delayed in opening, I was in and out of the clinic by 9:15 or so.  I stopped on the way home to pick up groceries.  Once home, I received a text from the optometrist's office letting me know my new glasses were available for pick-up.

I went with some trepidation as Dr. Kelly had mentioned I might have some difficulty adjusting to the new prescription.  When the tech gave the glasses to me and I slipped them on, it was like a new world opened up.  I obviously didn't realize how bad my eyesight was getting.  I have had absolutely no issues with stairs or focusing near or far with them.  Hooray!

This time, with the COVID vaccine, I did have a sore arm.  My daughter described it as someone punching you very hard in the arm and that pretty much how it felt.  I was a bit tired the following day, but I think that had more to do with the general busy-ness of the two days.  Tuesday I was up early in the morning, it was going to be a hot day, and got busy in the yard. I swept up pine needles and pine cones on the driveway, weeded the front area by the containers (it is xeriscaped but the weeds come in by the sidewalk and driveway), cleaned off the deck chairs and tables, and watered containers before heading inside for more housework.

Wednesday and Thursday were considerably cooler and overcast.  So housework kept me busy, sweeping and washing floors, and cleaning the bedroom carpet (thank you cats...not!).  I spent some time working on Ancestry as well...it's quite the rabbit hole at times.

We had a storm pass over on Thursday morning, but the sun made an appearance in the afternoon.  Out I went - our spring/summer is so short I need to spend as much time as possible outdoors. Other than checking on the progress of my containers, I enjoyed just relaxing in the sun and reading.  Earlier this week I finished a Sandra Brown novel Rainwater, and then I started Stranger in Paradise by Eileen Goudge.  I'm almost certain I've read the latter book before as it seems familiar as I read it, but I don't remember it well enough to not find it interesting.  I do recommend Rainwater - it's not the usual Sandra Brown fare, and was a very interesting story.

The storm clouds blew in again overnight Thursday into Friday morning.  I was wakened a few times in the night with the sound of thunder but was far too tired to get up to watch a lightning show. When I woke at 6 a.m. it was to the sound of water running out of the downspout at the corner of the garage - the weeping tile that drains the water down to the street just couldn't keep up.

It's not entirely clear in this photo but the eavestrough wasn't able to keep up either.  It's pouring down onto the edge of the spruce tree, and then running down the driveway to the street.  At noon we'd had close to 2 inches of rain in less than 24 hours.  That is close to average monthly rainfall for June in the city.  We can certainly use it as it's been so dry here but I'm sure the farmers and gardeners wish it would have come in smaller increments.

This photo was taken mid-morning Friday, and the amount of standing water in my backyard is gone now at midday Saturday.  I thought this was bad until I looked over to the backyards of my two neighbours to the west. The furthest of the yards looked to have a large pond forming. They have a fire pit and it was surrounded by water.  My next door neighbour told me today about a dozen years ago everyone along the street had to trench their back yards because one neighbour was getting flooded every year.  I'm thinking we may be close to needing some remediation again.
Today I woke to sunshine and decided it was past time for a walk.  After my morning call from my daughter I packed up the camera and headed out.  I keep thinking I should change up where I walk, but I really enjoy the paths near my house.  The terrain may be familiar but every time I walk there I see something new or interesting. 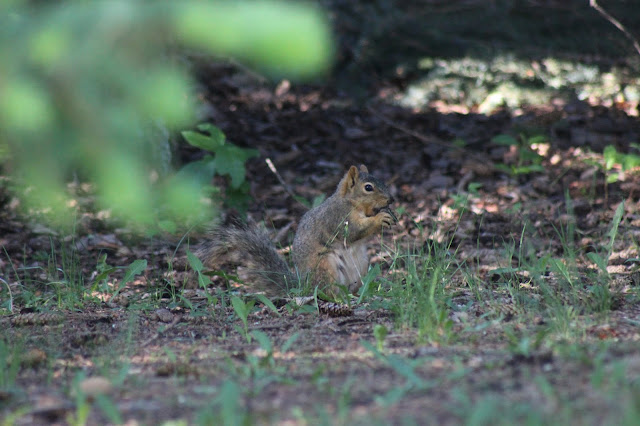 I spotted this young squirrel along the path just as he spotted me.  It initially didn't run away from me but waited until I got the camera out, changed the lens, and then it took off but not very far. 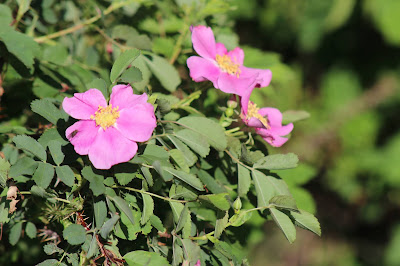 The prairie roses are blooming at one spot on the path.  These bring back memories to me of my childhood, as the bushes grew along the ditches near our farm house. 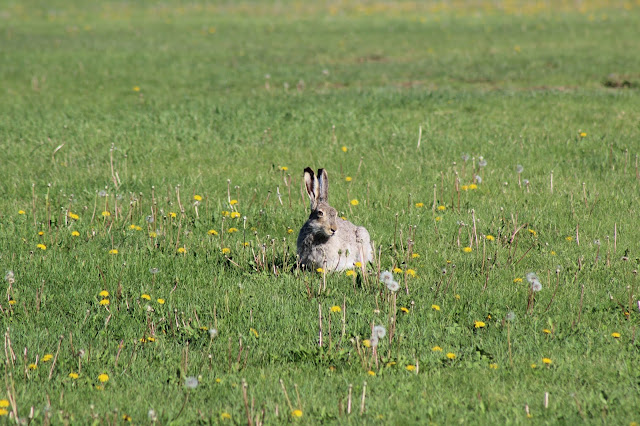 This fellow was enjoying it's breakfast in the sunshine.  I wonder if it eats dandelions? 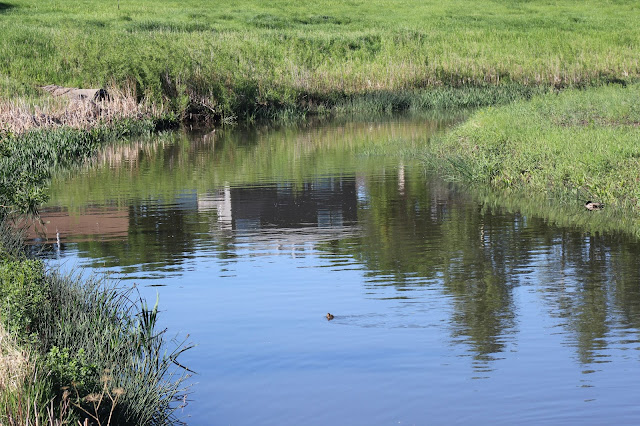 After the heavy rain, the creek is beginning to fill up.  (That's a wee duckling swimming and perhaps it's father sitting on the bank). 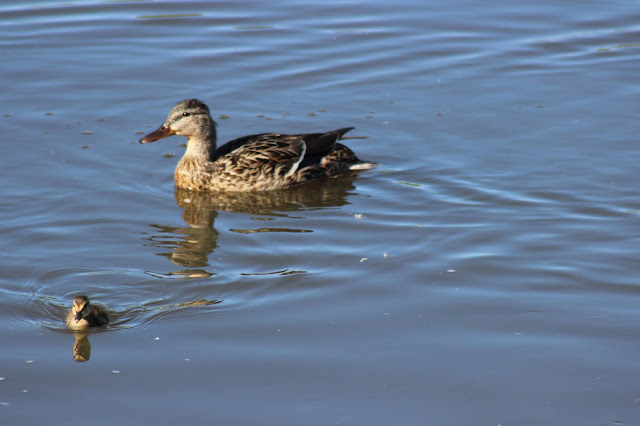 Just off the bridge were the mother duck and another of her young ones.  I was amazed how quickly the little ones can swim. 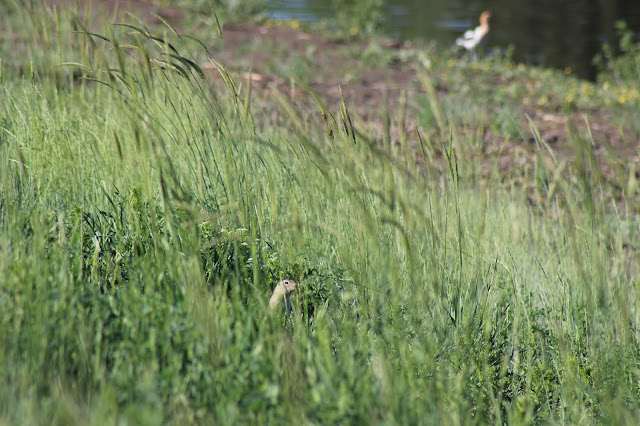 I couldn't walk down the path on the opposite side of the creek as it was just too wet and muddy but I did risk a wander through the grass to get closer to the edge of the creek.  I was focusing on the Avocet (out of focus in the background) when I heard the sound of a gopher calling out a warning to it's friends. Ha, there it was just a few meters away. 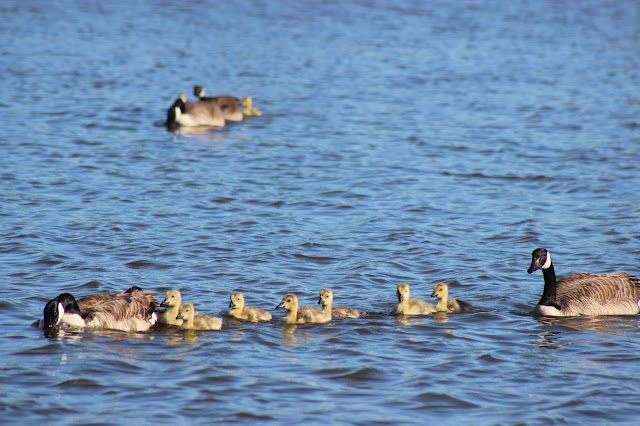 When I got to the pond, most of the geese were on the far side, but I noted these two families swimming across towards me.  I waited nearby and was thrilled as they came right up out of the water just a short distance away. 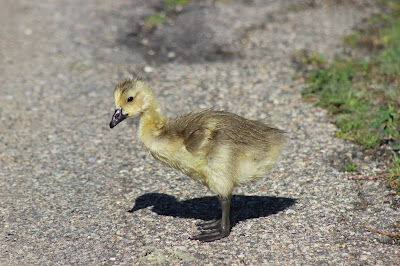 This little one wasn't the least bit shy. It hopped right out of the water and came onto the path were I was standing.  I can see the feathers are starting to come in. Amazing how quickly they grow up! 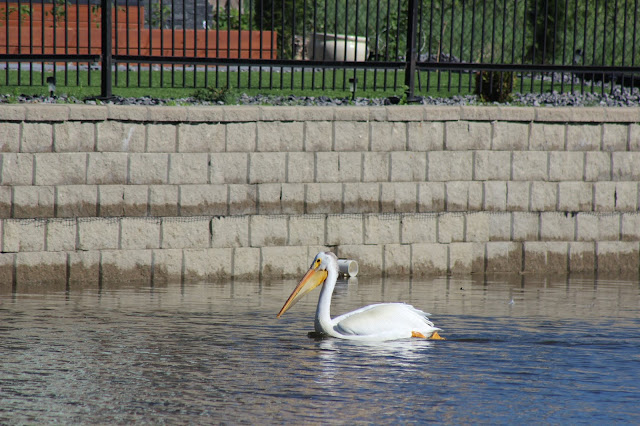 There were two pelicans flying over the creek (I took photos but they weren't worth sharing) and two at the pond.  This one was feeding at the far end of the pond.
It's been a good week, even with the changeable weather. And I'm about to head outdoors to enjoy the rest of the day on the deck with my book.
Have a great week ahead everyone!