After my busy week last week, this one has been quite a contrast - I've got lethargy down to a science.  The heat dome that was over British Columbia and Alberta has made it's way east to us and the temperature just kept on rising. Since Tuesday we've been under the heat warning (though I figured it could have been announced as early as Monday) and it won't end for a couple of days yet.

I spent some time outdoors every morning, watering containers, deadheading, and doing a bit of weeding.  Monday I went out for a walk, but didn't take my camera so there is no photo evidence.  Honestly there wasn't much to see that day.  Oh, I did talk to a passer-by who mentioned a baby crow that was under a tree with an adult crow keeping watch. I didn't see it myself so I was not certain it was the same one I saw last week.  My hope was it was close to being able to fly on its own.

Since the weather was cooler in the morning, most days I took my tea and laptop out to patio to read blogs and e-mails.  Since there is no grass in the front yard the mosquitos aren't nearly as bad as they are in the back.

My son was able to get his second vaccine on Monday afternoon.  He had a bit of a reaction to it, very achy the next day and he had some swelling near the injection site.  This was his week to work from home, so he's been able to rest in between his check-ins.

It's been a rather uneventful week, with the usual stuff dealt with; groceries, washing the floors upstairs, vacuuming both up and downstairs, laundry and, of course, the ubiquitous cat litter. I did a clear out of the fridge on Monday, since my son doesn't often eat leftovers, and made a list of needed grocery items.  It wasn't too bad, but I do have to remind myself to quit putting away small amounts of leftovers...unless I plan to eat them myself the following day.  There weren't any science experiments underway - yet.

I watered the containers twice a day, once in the morning and then again in the evening.  The tomatoes especially seem to soak up the water in this heat.  I was excited to find that I have five wee tomatoes on the one plant!  The peas are flowering too and pods are beginning to develop.  Sadly, my radishes bolted and went to seed.  But I have been able to get lettuce for several salads.  I started another container of lettuce last week and I should be able to use it next week.  I did catch a bunny on the deck one evening, but it didn't appear to have done any damage to the plants - yet.

I headed out early Friday morning to walk though didn't have my camera with me that day either.  You'll have to take my word for it, the ducklings are starting to grow up, and the goslings are beginning to rival their parents in size.  There were lots of gophers too, either they've become accustomed to me walking on the dirt path or I've become more adept at spotting them.  Sadly, I did find the body of the baby crow in the park on my way home.  It didn't appear to have been killed by a predator, rather I expect it died of hunger and/or thirst.  On a happier note, I did get one cell phone photo of the pelican on the pond.  It was feeding on something in the pond.

As I walked through the park on my way home, I spotted a pair of Hungarian partridges in the grass and with them, two wee babies - no more than 2 inches high.  I wished I'd had my camera with me then. 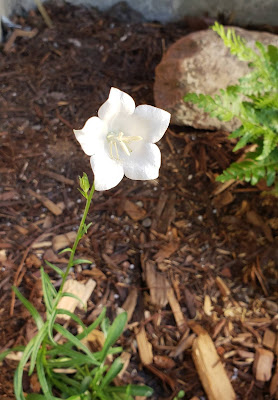 I spent an inordinate amount of time this week deadheading. All of my flowers are blooming like crazy but the heat is causing them to wilt and dry up quickly too.

This is a bellflower (which variety I'm not sure).  I had transplanted this bit from another part of the flower bed and am thrilled it has taken off.  There will be several blossoms along the stem - they do make a beautiful cut flower as well.  So rather than deadhead these I will cut the stems and bring them inside for a brief period of time.

Afternoons were spent as I predicted, indoors and avoiding the daytime heat. I got started on the project D has asked me to make - I may share a photo depending on the outcome.  In addition, I finished another book.  This one, Manner of Death by Stephen White started a little slow but soon became a page turner.  I had to make myself set it down so I can get some things done around here! The story is a mystery, several suspicious deaths have occurred over a number of years involving a group of medical staff who worked and trained together in the psychology and psychiatry program for a few months.  Two members remain, and a pair of ex-FBI agents make contact with Dr. Gregory after the funeral of one of these colleagues.  While he is happily married, the other doctor who may be in danger is his first love, and they are thrown together to try to determine who the killer might be.  The story has many twists and turns - for this reader, there was no certainty who the murderer might be until the very end of the book.  But even then not all of the loose ends were tied up, so some things must be left to my imagination.  Even so, I will look for more novels by this author.

As for the heat, the week started about with daytime highs of 30C (86F) and rose steadily until Friday when the high reached 35C (95F). We didn't cool off much overnight either. We're expecting slightly cooler temperatures for the weekend (still in the 30's) and we may have thunderstorms later today. I'll take the rain any way I can get it.

While it has been very hot for us, I can only be grateful we didn't get the heat that parts of British Columbia did.   A small town, Lytton, B.C., reached a high temperature of 49.6C (121.3F) last week. Then on Wednesday, a forest fire tore through the small community and decimated almost the entire town. The fire moved so quickly that most people had only 10-15 minutes to evacuate, and at least two people died in the blaze.

Today I managed to get out to mow the lawn before it got too warm and watered the front flower bed while I enjoyed my breakfast on the patio.  I'm planning to spend the rest of the day indoors, with the cats, who have decided the sun room is too warm even for them.  Hmmm....a cat nap sounds good right about now.