Blinked and I missed it

Again, this week, time has gotten away from me.  On Thursday I thought it was Wednesday and only realized the actual day when I noticed the neighbours had their garbage bins out for pick-up.  I still haven't figured out where I lost a day.  My daughter thought it might have been Monday since it was a long weekend but as I told her, for me every weekend is a long weekend.

So what did I get up to this week? The regular stuff like housework, grocery shopping, walking (all indoors this week due to the smoke outside except for today), and some crafting.  I'm getting so tired of the haze from the forest fires and I have a perpetual sore throat when I'm outdoors for any length of time. I did some yard work on Friday morning and spent two full hours deadheading and trimming back plants.  I try to deadhead every second day but obviously I haven't been doing a great job of it.

My tomatoes are ripening on the vine and so far I've picked four from the plants.  There's probably close to 60 tomatoes yet to ripen, and my peppers are doing great.  I have a couple of unknown peppers, one looks like a jalapeno, the others I know are a variety of long red ones, and then there are a half dozen greens, one that is a good size while the others are still tiny.  I have high hopes they'll be ready by the end of August.

On Tuesday I headed out to Value Village as it was senior's discount day.  I didn't find what I went looking for, a pillow, but did pick up a housedress (with pockets!), a tee shirt, both for me, and a fitted sheet for my daughter for around $12.  Score! At Salvation Army I found another pillow for $1.99.  I had taken the little pillow I made, that was meant for Eli's dad, to Eli last weekend.  He loved it so much he has refused to give it up.  So D sent me home with a bunch of sleepers Eli wore when he was a babe, and I'll make another pillow out of those for J.  At some point, I'm not at any rush. 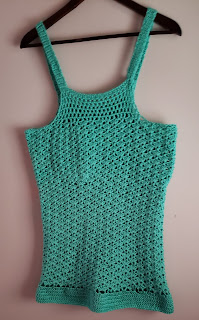 I managed a couple of "this close" to finishes this week too. The first is this tank top for my daughter.  I know it looks a little uneven in the photo but I've counted the stitches on both sides numerous times, so it's simply the way it is hanging on the hanger.  The straps are not yet sewn on to the top, as I'm waiting for my daughter to visit (later this week) to get the proper fit.  I had taken it with me last weekend for her to try on before I finished the mesh top and straps and it fit nicely.  I also added the band at the bottom as she prefers a longer top. I think it will look good with another tank top underneath too. 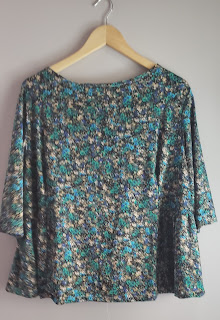 My other almost finish is this top for me.  It's difficult to tell, but the panel in front is attached to a peplum on the sides and back, so it's very flowy...which I appreciate.  The back needs to be taken in, as it's just too large - I've got that figured out and will finish sometime this week. I learned some things as I worked through this pattern.  First, it takes me much longer to sew a project than I realized.  I thought I'd be able to finish it in a couple of days, and it actually took me closer to three days.  Second, I need more practice sewing with knit material.  The stretch got to me a few times - I found myself stretching the material as I sewed, not a good thing. Lastly, I learned that sewing requires much patience, which I haven't much of, but I do enjoy it nonetheless.

I still haven't worked on Eli's sweater but I did get up to Fabricland on Tuesday to pick up buttons for it.  The buttons are on my end table by my chair.  This week, right?  We'll see.  Instead I've started pulling out the indoor carpet in the unfinished area of the basement. It's old and dirty so it needs to go.  The rug was glued down, making it somewhat difficult to remove in one piece so I'm pulling the top layer and then will scape the foam backing off the floor later.  I've got an area about 10 x 10 and have half the top layer pulled.  I wish it would just peel off easily but it's taking some major effort on my part. I only do about 10-15 minutes at a time because I'm old and out of shape and get winded.

I'm also working on decorating a Christmas stocking for Eli.  I purchased the stocking at Dollarama last year after Christmas and it's been sitting in my craft room since then.  I needed some felt for the project, and had stopped at Michaels as the selection at the $ store was limited, and of course, some sale yarn may have jumped into my cart.  So now I have more projects for this winter. Not that I didn't already have more than enough things on the go.  I really should take the example of a couple of bloggers that I follow and sit down and make a list and remind myself not to take on any more.  Even when the price is right.

Oh, and I thought I'd mention the cat litter cleaning.  One of the comments last week was I must have a lot of cat litter.  For those who haven't been a reader for a long time, I have two cats; Sasha who reached the age of 21 in May and continues to be quite healthy if not a little deaf*, and Saku who had his 13th birthday in March and continues to be a loveable pest.  Unless you are Eli, who calls him, "Saku, that mean kitty".  It's true Saku doesn't much like the kid and the two tend to steer clear of one another.  There are three litter boxes in the basement for the two cats and I clean these daily.  Let's just say the output is quite impressive. I probably should clean twice a day, but TBH, it's not one of my favorite chores.  *Sometimes I think Sasha feigns deafness, as he can hear the cat food can being opened from a fair distance.

Beyond that, I've been watching a lot of the Olympics.  I stayed up late Thursday night into the wee hours to watch the bronze medal baseball game between the Dominican Republic and Korean teams.  I watched several of the games over the week and was quite impressed with DR, and thrilled when they won the game in a dramatic fashion, scoring 5 runs in the 8th inning.  Korea had been ahead by one run and got two more back in the 8th but DR shut them out in the 9th.  At the same time I kept an eye on the Brazil/Argentina volleyball bronze medal game.  It came down to the wire with Argentina on top.  The coach was overwhelmed.

Speaking of overwhelmed, did you see any of the gold medal soccer/football game that our Canadian women won over Sweden.  Phew, what a game!  It came down to penalty kicks after regulation time ended in a tie.  (And it might not have, had a video review overturned the ref's decision not to call a penalty on Sweden.  One of the young Canadian players got the tying point on that penalty kick).  After the first round of five kicks, the teams were tied again, and it was down to sudden death.  The first team to score would win.  Again, one of the younger players came through and scored for the Canadian team!  I'm surprised some of you didn't hear me screaming from here.

This week the Canadian football league was back in action too.  Our province's team won their first game of the season, but they tried very hard not to.  The first half they were leading by 31 points, the other team scored 29 in the next two quarters while we only managed two additional points.  Thank goodness for our punter...he really made the difference for us.  Ryan used to play for the Seattle Seahawks and he certainly has the ability to kick.  He was born and raised here and I believe he plans to finish his football career here in Canada.

Well, this certainly turned into a rambling post.  Sort of like the rest of the week.  I'm planning a day trip this week out to a nearby nature reserve - we're supposed to have a couple of cooler days and my son is working from home; getting out of the house for a day will be nice. We may even get rain on Monday, fingers crossed!  It's been over two weeks since the last rainfall and it's sorely needed.