Wrapping up a quiet week

Another week nearly in the books! I realize when we look back time seems to go faster than when we're in the midst of it. But I have to say 2021 flew by, and here we are just over a month away from 2022.

My Christmas preparations are nearing completion. The gifts are purchased and wrapped, and hidden away in the storage room in the basement. It is the one room in the house that I know that Eli has yet to discover.  It's off the laundry room and there is nothing of interest for him in that room. I still need to pick up a few gift cards and will do so next week. 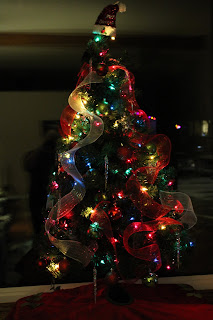 The trees are up (yes multiple this year). The first tree is the main tree in the living room, a small tree I have on top of a table that was purchased when I was hopeful I'd be living in a small place. I'm sure my neighbours across the street think I'm nuts but I love the lights and sparkle in the evening and early morning.

As usual, I continue to move the ornaments around, and last night I played with the ribbons as well (since this photo was taken).

The second of the trees is a gawky $4 Dollar store tree. It's standing on the bathroom counter and I've decorated it with small knitted and crocheted ornaments. Pinterest is a rabbit hole! These little ornaments use up a bit more of my leftover yarn and are a quick and easy project to work up while I'm watching television.

I won't bore you the details of the rest of the decor. Suffice to say there are Christmas (or winter) themed items throughout the house.

I've yet to start my baking, that will be the project for the early part of next week. The list is short so it shouldn't take much more than a couple of days.

Beyond that, it has been a very quiet week. The Canadian Olympic curling trials are underway as were the European Curling Championship. Because of the time zone change, I didn't watch all the draws of the latter event, but was awake shortly after 5:30 a.m. on Thursday to watch the Norway/Scotland game.  As I had expected the Mouat team of Scotland won the game. This is a young team that are so fun to watch - they make some incredible shots and love to play with rocks in play. Great for the viewer.

Sadly, our Saskatchewan team hasn't fared well.  The third player on the team had to withdraw due to personal reasons, and while the third who came on board isn't unknown to the team, the chemistry just wasn't there. It's down to three teams on the men's side, all of whom have been to the Olympics in the past, though most have different team members. In my mind, only two of them deserve the second chance.

On the women's side we have tie breakers today to determine who will be the third team in the playoffs. There are already two teams already qualified, and one of those two have also been to the Olympics. I tend to cheer for the underdog so I'm hoping for one of the remaining teams to have the opportunity to represent Canada.

Housework, laundry, and groceries have had to fit in between the draws. Other than feeding the birds and running to the mailbox, my steps were achieved by walking in the house. I've found a podcast series I enjoy listening to, so I put that on and start circling the house. Again, the neighbours across the street might think I'm nuts (assuming that they can see me walking past the window every minute or so), but I'm too wimpy to walk in the cold or when it is icy.

We've had a few cold days and one miserable cold day (overnight temperature was about -20C/-4F) but the daytime temperatures rose to above freezing on Friday and are expected to last for a few days. A good thing, as our football team has a home play-off game on Sunday. To be honest, they've played so poorly this year, I don't expect they'll win the game. I'd rather watch curling.

I'll end this post with a Santa photo. D was able to get an appointment with a local photographer after someone cancelled. She's learned she has to book early in the future. 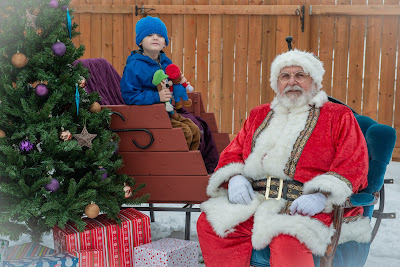 What a good idea to allow for the photos with a little social distancing.  Thankfully the weather cooperated too for outdoor photos.  Eli told his mom afterward that "this is the best Christmas ever!". In a few days, he'll start opening his advent calendar. The first box contains a note, look for a special visitor. That would be me, as I'm driving out for a short visit.

Take care everyone, stay well and have a good week ahead.