Another week that was

As I sit down to write this on Friday, I'm looking back and thinking what happened to this week?  I do know it has been a good one.

Before I forget, thank you to all who expressed your concern for D and Eli last week.  I'm happy to report that she's received an e-mail from the insurance company and the settlement is better than she anticipated.  Her car was a 2009 Ford Focus, and the reason for the write-off was the frame was bent in the accident.  It wouldn't be worth it to repair it.  Now she has a 2011 Chevy Cruze. I should note that both of my adult children own vehicles that are newer than mine...I have 2007 Toyota Corolla, and I plan to drive it until I give up driving.  Hope the car agrees with that plan.

We've had some near summer like temperatures a few days this week and I managed to squeeze in a walk a couple of days in between curling games.  A girl has to have her priorities, right?  I didn't take my camera with me though so no photos to share. The number of geese and ducks are increasing exponentially.  In the backyard the juncos are here too.  I believe they head further north as I don't recall seeing them much in the summer.

I did get Eli's sweater sewn together, but have yet to finish the button bands. Since I do most of my knitting/crocheting while watching television (curling) and the picking up of stitches takes close attention it will wait until I'm less focused on the television.  So no photo again this week.  I got distracted with some yarn my daughter sent home with me and started a tank top for her.  I'll have to wait until I see her again before I finish it, as I want to be certain of the size. Plus I'm modifying it, as the patterns calls for tie strings and she agreed she'd rather have shoulder straps.  I've just started a third project but will wait until I get into it before I tell you what it is.

This week, I've also spent a lot of time on Ancestry.  This time not adding people but rather deleting them.  I had been working on tracing my grandfather's first cousins to see if there were any more close connections.  But I made a mistake as there are two individuals named Janet Bell in my tree - and I picked the wrong one, one who is at least two to three generations older than my grandfather.  You would think I would have noticed the age discrepancy but no.  I spent days tracing from this individual and her spouse and ended up adding nearly 5000 people to the tree before it dawned on me I'd made an error.  It took me a day and a half to delete the entire branch!  I've learned to trace backwards first to confirm that I've got the right person before I start another search.

Did I tell you that I heard from another cousin?  This one from my grandmother's side of the family.  She is starting work on her mother's side and saw that I had her mother in my tree but the information was not correct.  I was working off a Census from 1920 that spelled her name incorrectly.  M was able to correct the spelling and provide additional information that opened up even more hints. I was also able to give her some information along with photos of her great grandparents (my 2X great grandparents) that she hadn't seen previously.  Her mother and my grandmother were first cousins.

While I was reviewing that information, I noted the name of cemetery in New Westminster, B.C. This piqued my interest because my dad's brother Wilf, lived there in the 60's and 70's and was married to a woman named Ann.  I seem to recall we met her at one point, and I know as a young girl I wrote to Aunt Ann a few times and she was kind enough to write back.  She passed away in the 70's and Uncle Wilf returned to our home town before 1980 after marrying again.  I decided, out of curiousity, to check the cemetery information and searched for Ann and I found her!  The details provided in the Find a grave site noted that she was married to Wilf H. There is something satisfying about being able to give her a proper name, and not just Ann.

I did get outside on Thursday as well, spending about an hour cleaning up pine cones and pine needles around the spruce tree in front.  I managed to gather two small garbage bags of these items in time for the garbage truck weekly pick-up.  Despite the amount of walking I've done, this activity required different muscles, and I figured I'd be feeling it the next day.  But I didn't, at least not much. Hurray for that!

It's now Saturday.  I'm not watching curling this morning because it all came to a screeching halt last night after one of the teams preparing to head home tested positive for Covid-19.  They would have been in the bubble about 3 or 4 days prior to event, and it's been a full week so I have to assume they were exposed just prior to arriving.  All of the teams that are in the playoffs (Canada is not - they lost their qualifying game last night) will be tested today and depending on those results, the games will be rescheduled.  At least I hope they will.

So rather than sit around the house and mope, I headed out for a walk this morning.  It was just above freezing, but with no wind, overcast but with a promise of warmer temperatures later in the day.  Here are a few photos. 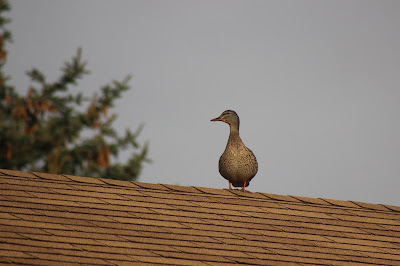 As I started out on my walk, I could hear several ducks calling close by.  Since I'm not that close to the pond, it was a bit unusual.  This female was talking up a storm on the roof of a house about a half block away. 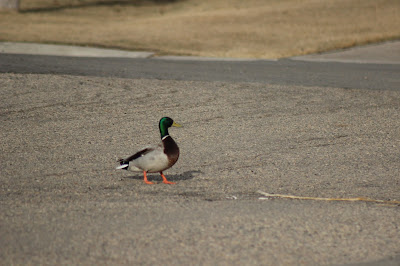 This male mallard was walking on the street just ahead of me.  He wasn't saying much. 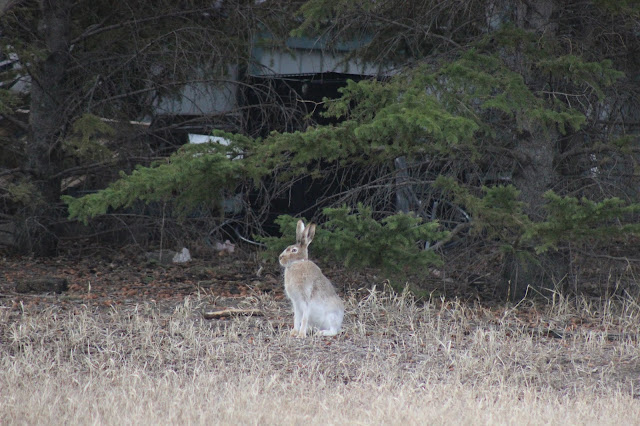 On my way to the creek I spotted a couple of hares closer to a couple of houses.  This one intrigued me -  it almost looks like it has a dark t-shirt and a light pair of pants.

The creek was very quiet, with the water still so low and freezing temperatures overnight, there was a thin sheet of ice still on the water.  Further along I found this solo duck in a wee bit of open water. 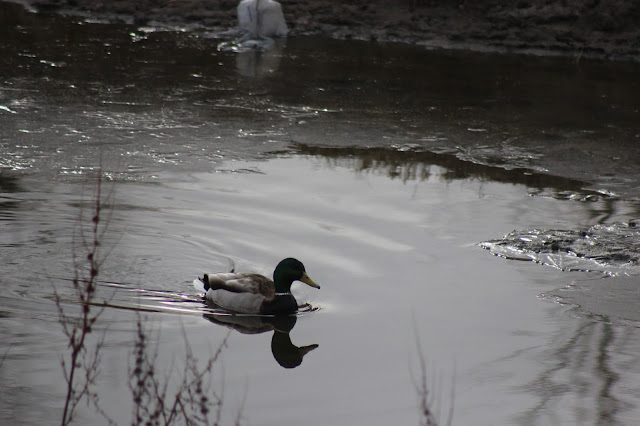 I first heard and then saw a red winged blackbird.  I love their song. 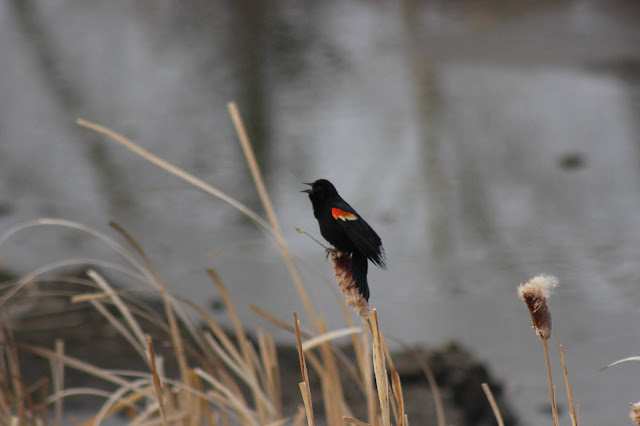 The pond was busier, but not nearly as many ducks and geese as I've seen in recent walks.  This one startled me as I didn't notice it right away. 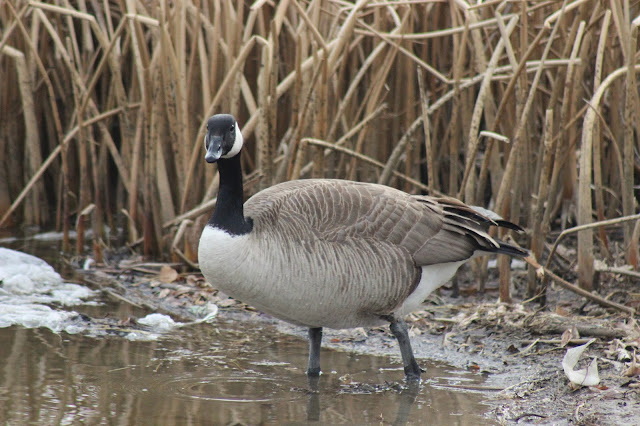 Speaking of not seeing - I took the photo below as I was walking back through the park and initially hadn't seen the second hare on the left. 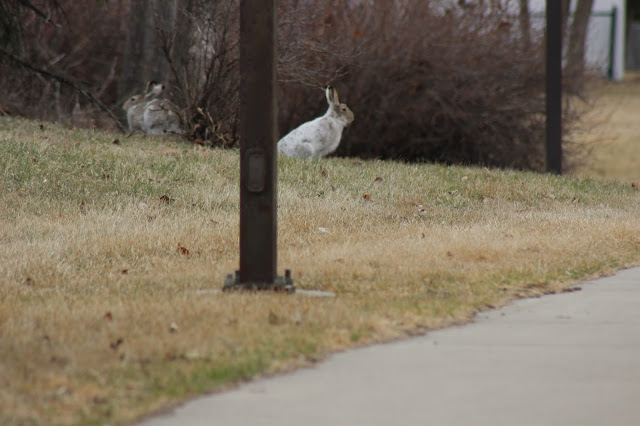 Finally, as I walked up the driveway I could hear a robin in the spruce tree.  I turned around and spotted him at the top of the tree.  Another birdsong that I enjoy. 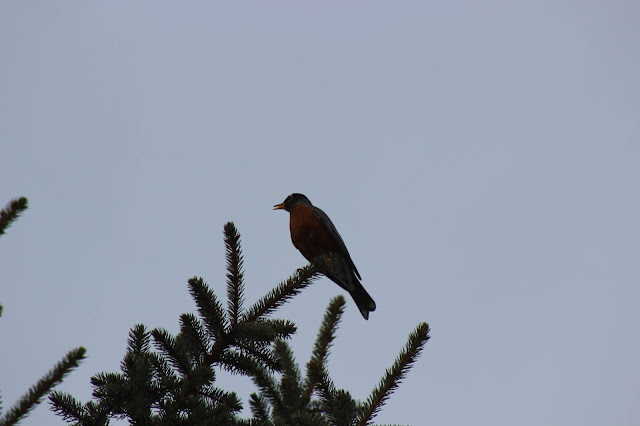 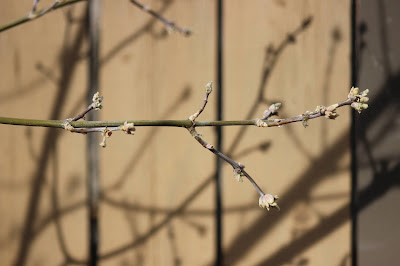 It was a good morning for a walk and probably the last for about a week.  Though we're expecting a high of 17C (63F) this afternoon, there's another storm heading our way that may bring 10-20 cms of snow (4-8 inches) from Sunday through Thursday.  Just when the trees in the back yard are starting to bud out.  Welcome to April in Saskatchewan.
Have a great week ahead everyone.  Take care and stay well.