I ought not to suggest that life is quiet around here.  Because when I do, life has a way of turning topsy turvy when I'm feeling too complacent.

We had an absolutely beautiful day on Sunday.  The sun was shining and the temperature rose to 17C (63F). I had done my morning walk in the house, but couldn't resist the allure of the outdoors.  This time I remembered my camera card so there are photos. 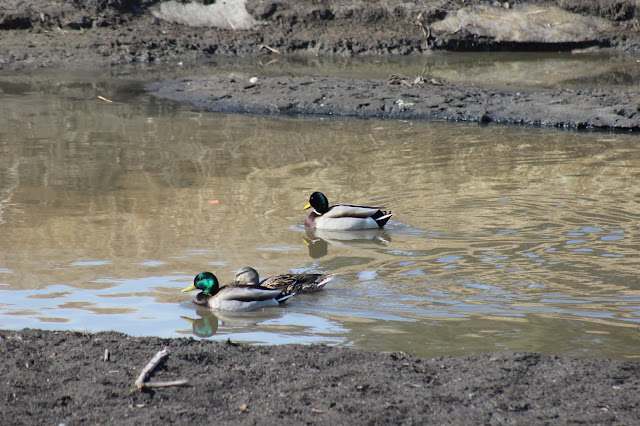 The mallard ducks are back at the creek.  The water level is really low this year.  Hopefully we get some rain in the next few weeks.

Looking back under the bridge, you can see how little water there is. I don't recall it ever being this low. 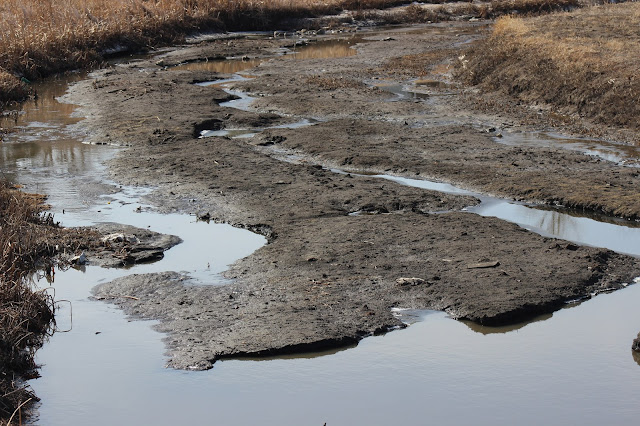 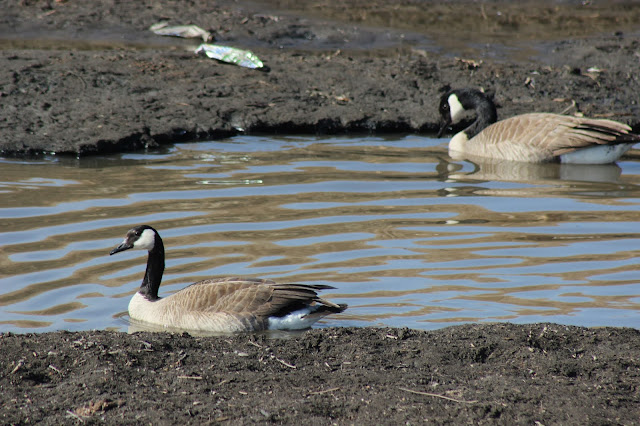 Despite the low level, it wasn't stopping the ducks and the geese from feeding. 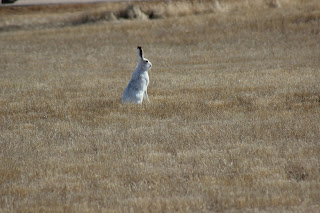 As I walked through the grass from the creek back to the walking path I startled this hare (I still think of it as a rabbit though I know that's the proper name). It didn't go too far as there were lots of people and dogs on the walking path.

Over at the pond the geese were noisy! I'd suggest there were close to a hundred or better on the shore, on the ice and in the water. Many seemed to be napping in the sun but there was lots of chatter and some disagreements too. 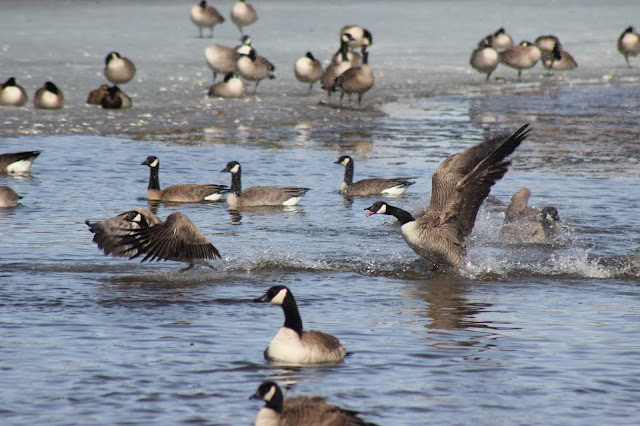 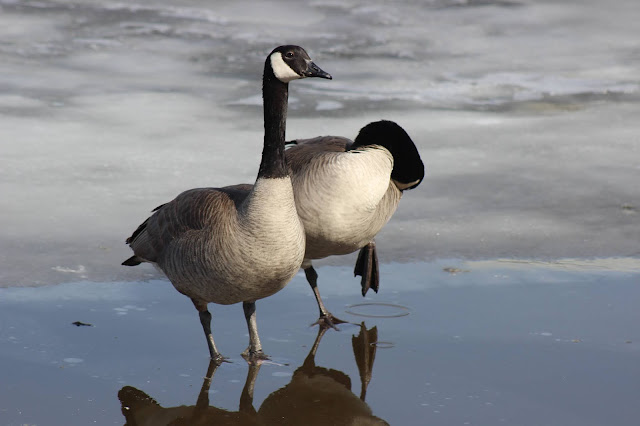 This pair were at the far end of the pond where there were fewer geese.  One was grooming while the other kept an eye out. I've never seen a goose dangle a foot like this.  The reflection in the water is pretty interesting too.

I was so glad I got out for my walk on Sunday because the weather turned downright nasty on Monday.  In the morning, we had blowing snow warnings, though the snow didn't start falling until mid-afternoon. The wind picked up and throughout the evening we had gusts up to 100 kph (62 mph) that kept up through the night. When my son went to work Tuesday morning there was an drift outside the garage about a foot high. For some reason, it always drifts in at the garage while it blows across the driveway.

Tuesday was cool but I got out and did some shoveling and ran a couple of errands for my daughter.  It was really cold Wednesday morning, I awoke to a temperature of -17C (1F)!  Thankfully, it warmed up throughout the day and we topped out at 7C (45F).  That's Saskatchewan weather, if you don't like it, wait 15 minutes.

I was especially grateful for the warm-up as I made a trip to see D and Eli on Thursday.  It wasn't in the plans but became a necessity. On Sunday they were out for a drive, and were involved in a car accident.  Thankfully neither were hurt but the car is a total loss. I was so proud of her, as she dealt with everything, arranging for a tow truck, calling the RCMP, and finding a ride to get back home as they were several miles away.  She was upset, mostly with herself, and not long ago this would have resulted in a melt-down or panic attack. She did call me to ask if I would video chat with Eli as he was still in the car and getting bored with the wait. I was happy to do so and we had a good visit - the little stinker has discovered how to play videos we can watch together as we chat.

Once safely at home, she did some research on line and found two possible vehicles at dealerships in her town.  One of them was a far better price so she arranged to take a test drive on Wednesday morning, when Eli went to school.  The same friend who picked her up on Sunday provided transportation. She liked the car and was able negotiate a better deal than the on-line price.  This may not sound much to many people, but she struggles with any potential situation that could result in conflict.  I can recall a time that phoning anyone she didn't know well was difficult for her.

I drove out early Thursday, in time to spend a little time with Eli before school.  Once we dropped him off, we headed for the insurance agency to arrange the license for the vehicle before she could pick it up.  After the school pickup,  we headed into the nearby city so she could get the rest of the items left in her vehicle at the tow yard.  I drove because she wasn't feeling comfortable driving on the highway. One of the items was the remote control for her garage door - definitely important. Before I left for home we spent some time at the park letting him run off some energy.

I was absolutely exhausted by the time I arrived home.  It's been a long time since I've driven five hours in a day.  I got a chance to relax on Friday as the Worlds Men's curling event started that morning. While watching I finished knitting the pieces for Eli's sweater - first time in almost a week I worked on it. This morning I blocked and pinned it - once it is dried I'll sew the pieces together and finish the collar and button bands.

I can officially say that spring is here.  On Thursday before I left for D's, I saw my first robin!  This morning there were two blue jays in my yard.  The jays are pretty birds but, oh my, the racket they make.  I couldn't get to my camera fast enough but I'm sure I'll hear them again.

That wraps up my week...time for more curling!  Have a great week ahead everyone.  Take care and stay well.