I can see clearly now

I started the morning off by clearing out the rest of the bedroom in preparation for the window replacement crew.  The contractor said I didn't need to strip the bed, just cover it in plastic but I figured it was a good day to wash all the bedding.  I did cover the mattress and it's pad with plastic while the rest went into the washer.

I took the stool Sasha uses to climb onto the bed along with the pillows into the spare room where the cats would spend the day.  It's currently used for some storage and Eli's toys, and with only one chair in there I figured Sasha and Saku would want more options for sleeping.  A cat litter box, kibble and their water fountain was moved in there as well.  They had everything they needed for the day.  I thought Saku would be a pest, trying to get out the door but he didn't, it was Sasha who hollered every so often.

Before the crew arrived I got the kitchen floor washed but decided to leave the front hall until after they'd left as I figured they would be in and out....they were.  I even had all the laundry washed, dried, folded and put away before they got here.  They arrived just after 9:30 a.m. and were gone shortly after 3 p.m.

Here's a few photos from the main event - the replacement of the bay window in the living room. 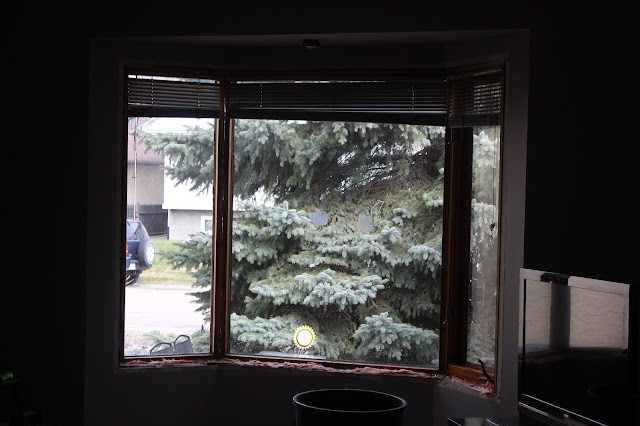 One of the crew worked inside removing the moldings around the window and inner sections of the frames.  The other two were outside doing what they were doing.  I have brick on the exterior and I know at one point, one of them mentioned removing parging. 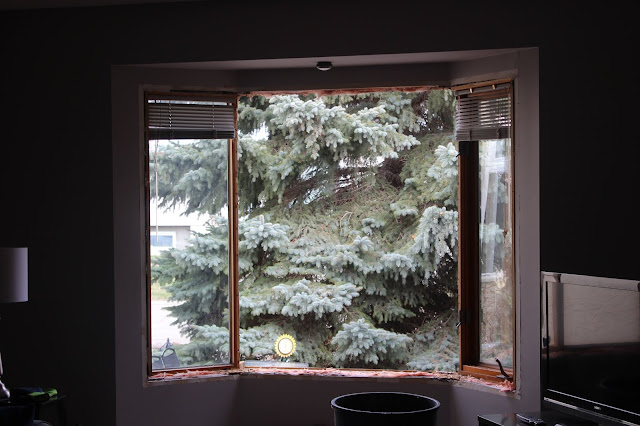 The center window is gone!  They took it out in three pieces - one of the crew said it was easier when taking them out.  They were careful and no windows were broken.

I was pleased to find out there was no sign of water damage or mold in the old window frame.  We'd had an ice dam a few years ago, but apparently my son had gotten to it quickly enough (I was away on a cruise). 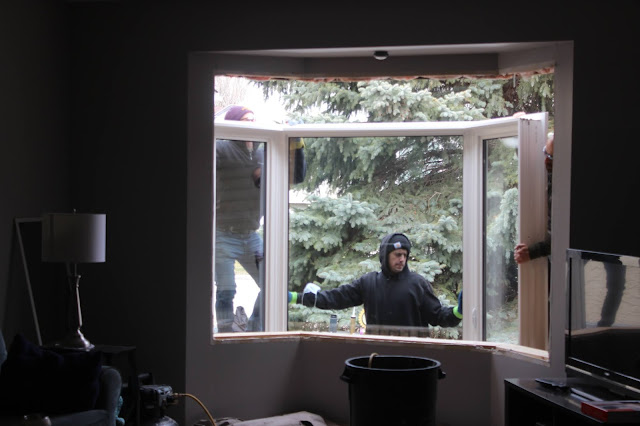 And here's the new one as they started installing it.  It looks like it was cold out there, but it really wasn't that bad. It nearly 8C (46F) when they arrived and by noon they were working without their heavier jackets.  I had the heat turned down a bit because there was no point in heating the outside but I only heard the furnace cut in once during the process. 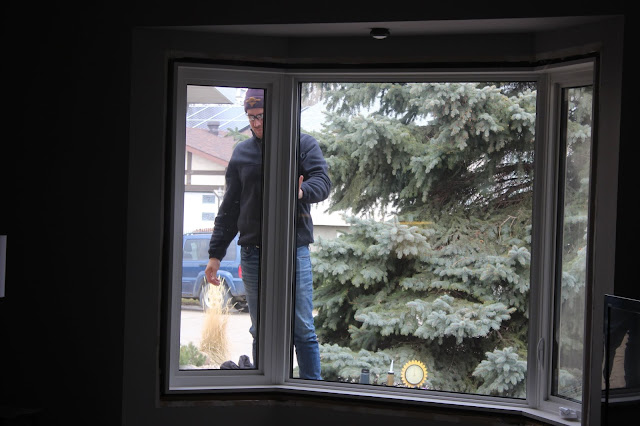 Once it was mostly in place, I had to laugh because this fellow was gently kicking it in.  That's some precise tool. :)  After that, there was a whole lot of measuring and leveling that went on before they were satisfied.  They used spray foam insulation to close in all the gaps - I shouldn't have to worry about air leaks. 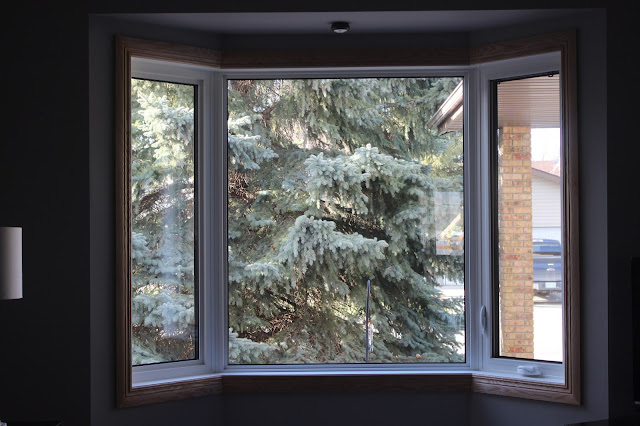 Here's the new window after installation. The only issue they had was the old moldings were too narrow. While two of the crew sat and ate their lunch on the patio, the third ran to the store for wider moldings. I'll have to stain these at some point.  The fellow did offer to have me stain them first before he put them up, but I wanted it done. 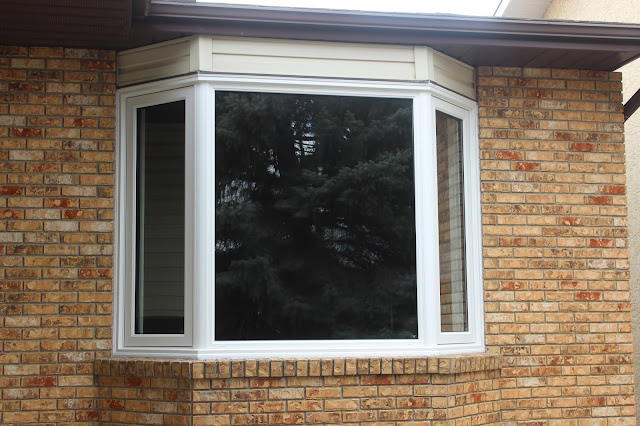 Here's an exterior shot.  I wish I'd taken a before photo but this one from 2013 will have to do. It was taken shortly before the the front patio was put in.  And obviously before I had put in many of the perennials in the front flower bed.  Wow, it looks barren! 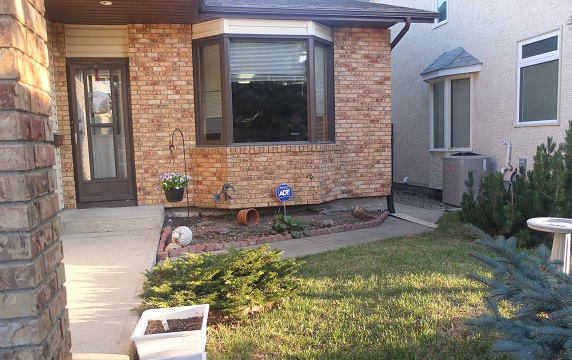 I didn't take any photos of the bedroom windows replacement as I would have been in their way.  Suffice to say they look good.  I was very pleased with the work that was done.  The only thing they didn't do particularly well was clean up after themselves. In their defense I did tell them I would be cleaning the where they had been working after they left.  One of the crew did sweep part of the living room floor but they left sawdust and some pieces of plastic and wood chips on the driveway and patio.  When they were gone, I pulled out the vacuum and cleaned up both the living room and bedroom, wiped down the television stand and end tables, washed the front hallway floor, and then went out and swept up the driveway and patio.

Question for you, I think I'll paint the framing around the screen door - any suggestions as to what color I should consider?  I want to stay away from the dark brown it is now but I don't think I want to go with white.  The siding is a pale yellow or cream, which might work or maybe I'll go bold and go with one of the colors in the brick.  I'd love to paint the screen door as well but the thought of removing it and rehanging it sounds like a lot of work. Hmmm....maybe I can convince my little brother to lend me a hand.

Isn't that the way when something new is brought into the mix?  Everything else starts looking shabby and needing a refresh.  Well, at least for now the windows are clean and shiny!