Ending the week on a high note

I started this post Friday evening, managed one paragraph before I gave in to the need to go to sleep. It was only 7 p.m., but I'd got under 5 hours of sleep the night before, and with just a couple of brief moments of wakefulness through the night I slept until 7 a.m.  I was definitely tired. I scrubbed my original paragraph as it didn't make a whole lot of sense.

So back to regularly scheduled programming.  This week was pretty quiet as I remained under my self-imposed, just to be cautious, isolation until Thursday. I spent most of my time doing housework, knitting/crocheting while watching television, along with a bit of reading out on the front patio, and listening to podcasts while doing my walks indoors.

Since the weather is still lovely, I haven't yet cleared out the containers.  One morning I went out and took some photos of the various flowers. 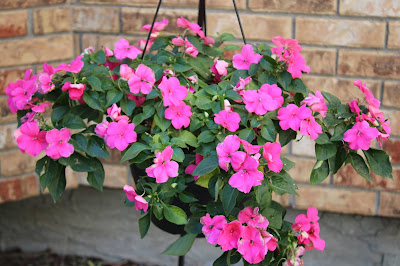 The impatiens is my bellwether - when we have a frost that causes it to die back, I'll do my yard clean-up. 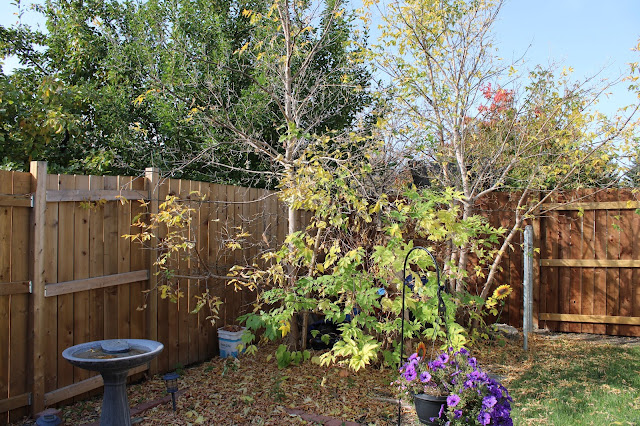 In the backyard, my trees have shed most of their leaves.  The hanging basket of petunias is looking straggly, even after it's recent haircut. 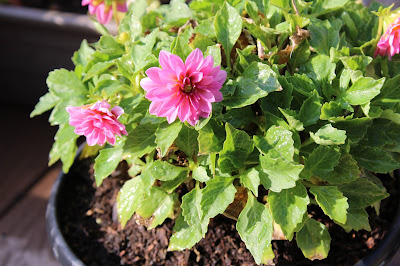 The dahlia, that I rescued half-dead from the garden center, started blooming about two weeks ago.  I'm hopeful, I'll be able to over-winter it this year and enjoy it again next year. 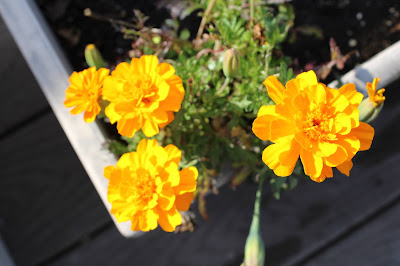 The marigolds are showing their sunny faces, now that the tomato plants have been pulled from the containers. 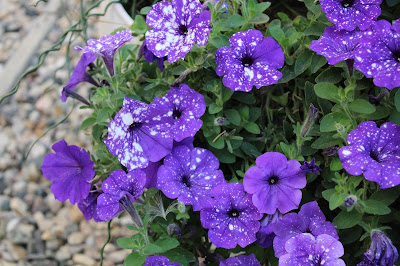 Lastly, these petunias are interesting to me.  The splashes of white differ so much and the only bloom doesn't have any.  I wonder if that has something to do with the weather or simply a natural progression as the plant ages.

On the creative side of things, I've finished knitting the market bag I started last week, though it still needs to be sewn up. I also finished knitting my first scarf - I'm using up remnants or balls of yarn I got on deep discount. I've started crocheting a second, but based on the amount of yarn, it will likely be a cowl rather than a scarf.  From last week, I made a little troll to sit on my tiered tray.  Again, I used a small dollar store wood block sign as the base.  The little hat is a piece of a felt scarf, the beard are pieces from a mop head, with a wooden bead for the nose. 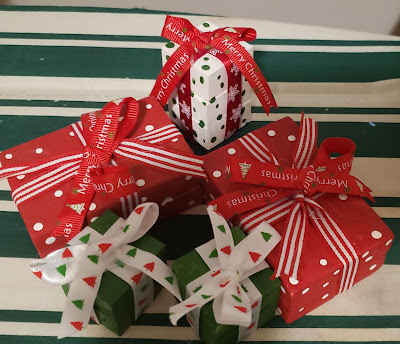 The little gift packages are made from dollar store tumbling blocks and small wooden blocks. I glued the blocks together, painted, and tied and glued on the ribbons.  They'll be added to the wheelbarrow that currently holds fall flowers and mini-pumpkins.
Set free on Thursday, I did my grocery shopping and made a stop at Value Village.  I found more yarn for scarves (I think enough to make two), a set of knitting needles, a pair of photo mats, and a bag of Jenga blocks, all for less than $11 including the taxes.  At this rate, I'll never use up all the yarn in my stash but the color and amount of yarn was too good to pass up.
Friday, despite the lack of sleep, was a very good day.  I did some housework, caught up on some television programs, and then spent the afternoon with my friend K.  It's been a very long time since we've spent time together, though we've talked on the phone occasionally, so there was lots to catch up on and lots to discuss.  She returned the container I filled with goodies last Christmas, and a book I'd lent her, and she left with a box of books.  There were several she hasn't yet read, and they'll all be added to the two boxes of her own for the book sale she and J volunteer at each year (the last sale was in 2019). We solved many of the world's problems, though I suspect no one is listening to us, and enjoyed the sun and warmth on the back deck.
Today is another busy sports day.  I had the replay of the football game from last night (not our home team) this morning, and there two more games later today including the Riders.  There are also several curling events going on, and I may be able to fit in a live stream or two. :)
I'm going to head out for a walk shortly, the temperature is sitting around 9C (48F) so it will be fresh and lovely out there. There are several fires north of us, and the smoke seems to be headed this way.  I was chatting with Eli this morning on video chat and D took us outdoors to show the haze.  She says it smells like a campfire. I hope it passes us by.
Take care everyone, stay well.  And thank you again for the expressions of concern for D and Eli.
Posted by Maebeme at 10:39
Email ThisBlogThis!Share to TwitterShare to FacebookShare to Pinterest
Labels: crafts, friend, garden, tired, weather