I've been to Fort Lauderdale many times, always the day prior to boarding a cruise ship.  I've generally stayed in one particular hotel that has both an airport and cruiseport shuttle.  Nearby is a shopping mall and a Moonlight diner (which I enjoy immensely).  However, I've always left on the disembarkation day so really haven't any time.  My bucket list item for this trip was to be on the beach to wave goodbye to the cruise ships as they sailed out.  Hotels on or near the beach tend to be expensive but I used my Airmiles points to book two nights at the Best Western Plus Oceanside and it cost me only $84 Canadian.  Hooray for points!

As the name implies the hotel is near the beach but not ocean view.  My room was actually on the ground floor and overlooked the pool.  The beach was less than a five minute walk away.  I was pleased with the room and hotel amenities.  They offered a free breakfast, with a wide variety of items to choose from, and also had a lunch and dinner menu. 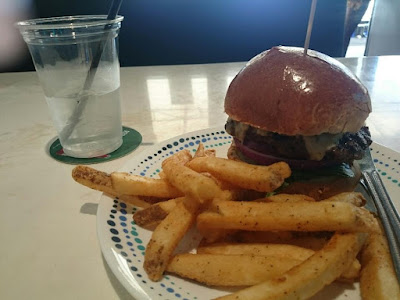 I had to wait a couple of hours to check-in, but then I was there at 10:30 a.m.  I spent my time by the pool, reading and just enjoying the weather.  Shopping and restaurants were about a 20 minute walk away.  After I settled at the hotel I took a walk on the beach promenade to see what I could find as an option for lunch.  After a bit of back and forth, I chose the restaurant Ocean Bleau for a burger and fries.

Both were delicious and I couldn't finish it all as the burger was huge!  While I ate indoors, this was the view from my seat in the restaurant.  Lovely! 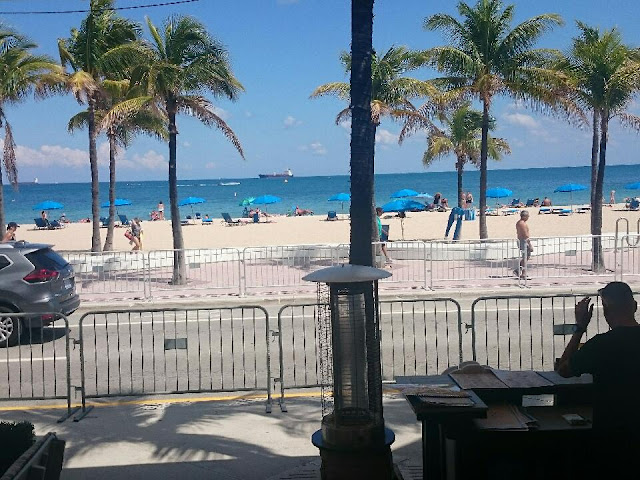 After lunch it was back to the hotel to relax by the pool before heading back out to the beach for my walk down to the end where the cruise ships sail.  Unfortunately by 4 p.m. the nice weather didn't hold and according to the weather channel a "rare Nor'Easter" was blowing in.  It was a tough walk with the wind blowing towards me, and the sand swirling around  As a result I didn't get as far down the beach as I had wanted...but it still worked out okay. 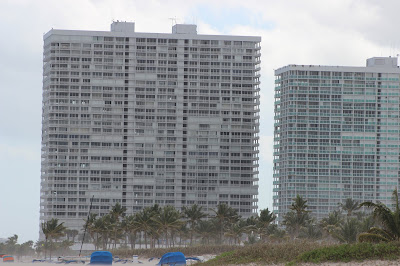 These are the Point of America's apartments at the side of the channel.  This is what casts a large shadow on the beach (when the sun is shining).

I think you can see how windy it was by the trees and the haze in the air is the sand. 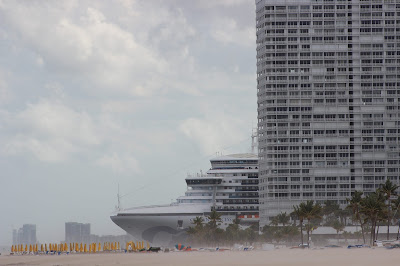 I waited for about 20 minutes, all while being sandblasted, and then there she was!  It is the Crown Princess appearing from behind the apartment block.

It was such a different perspective and despite the weather I was so excited to be there. 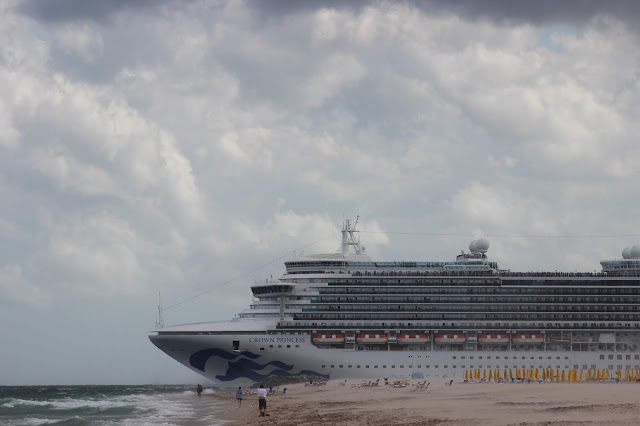 This photo makes me think the ship is parked on the beach.  You can see I wasn't the only one out to watch her sail-away.  Hardy souls all of us. 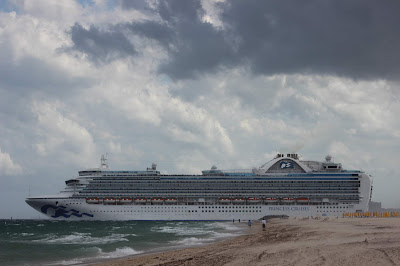 It was bittersweet to watch her sail away.  I had such a marvelous cruise, and hope that those who are on her for the next ten days (they'll have disembarked today I believe) did too.  Though I suspect the waters were a bit rougher at least at the beginning.

I turned around after the ship was further out to see and headed back to the hotel. 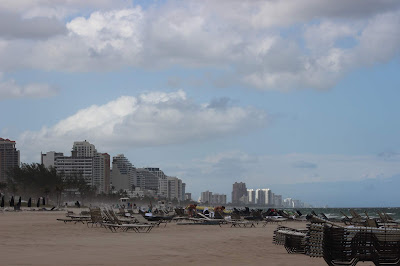 My hotel was back of the buildings in the gap between the ones in the foreground and the ones further back.  It was a lot further down the beach than I expected, but walking back was easier then the walk out because the wind blew me that way! There were still people on the beach but it was mostly hotel staff picking up the chairs, beach towels and any other debris. 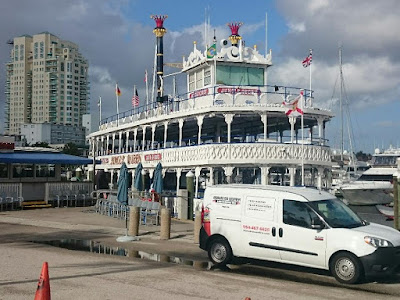 I spent the rest of the evening relaxing and reading in my room.


The following morning after a great breakfast, I headed back out towards the shopping area.  It was raining off and on, though still warm, but the promenade was closed.  I was disappointed as I would have liked to have walked along the beach.  However, that disappointed turned to surprise when I came across this:
Who knew there were river boats in Fort Lauderdale?  Not me!  I walked for about 45 minutes before I turned back (with a stop at a CVS for a bottle of water and snacks for the plane).  As I came up to the pier, I noticed there were people getting on board so I stopped at the ticket office to find out about the cruise.  The ticket taker told me this was a river cruise, the cost was $25, but they had a later cruise at 1:30 that was 3 hours in length and would visit their private island with a wildlife sanctuary with a cost of $33US.  She mentioned there were options to buy lunch on the island as well.  I was sold!

I went back to the hotel, dropped off my bag and read by the pool for a bit.  I would note, I chose to do so because there was a sign reading "No outside food or drink allowed".  That turned out not to be true but what did I know?  As I was walking back to the pier, I was drenched in a brief downpour.  I was glad to have my rain jacket but even it was soggy.  It was okay though because after purchasing my ticket and while standing in line the sun came out again and I was dry by the time we boarded. 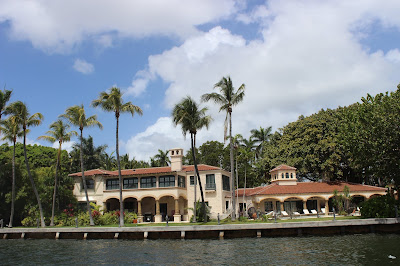 Along the way one of the crew kept us informed as to the history of the houses we were seeing.  I can't recall what we were told about any of them.  In any event, it was interesting, and the stories were often funny.

I'll let the photos tell most of my story. 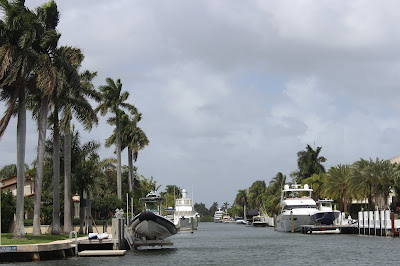 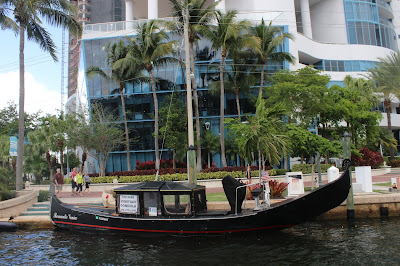 I thought this might be a fun way to do a river cruise.  Maybe next time. 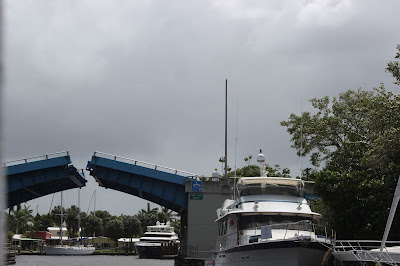 There were several bridges that opened as we sailed through.


Check out the fruit on this tree.  I should mention every house we passed had a least one boat in front of it. 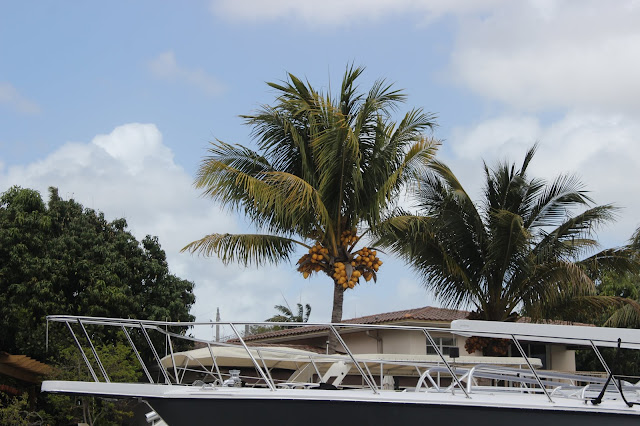 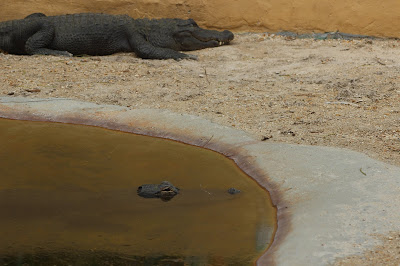 We arrived at the island after about an hour of cruising down the river.  The feature exhibit was the alligators. There were three of them chilling out in the pit.

(The third one is behind the one that is peeping out of the water). 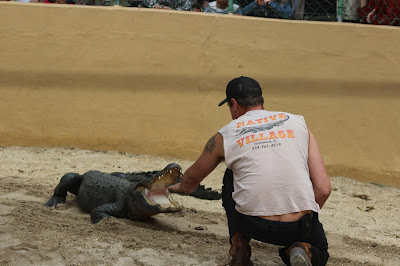 The handler climbed into the pit, dragged the one that was laying in the sun over and began his show.  I lost interest at that point. I'll be honest I don't like seeing any animals man-handled.  I just don't understand how that can be entertaining.

Besides there were enough other creatures and beautiful flowers to keep me moving. 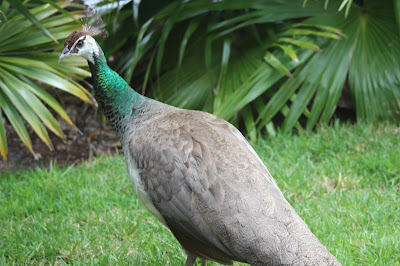 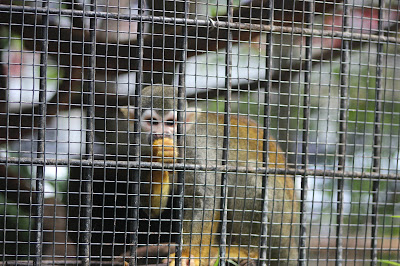 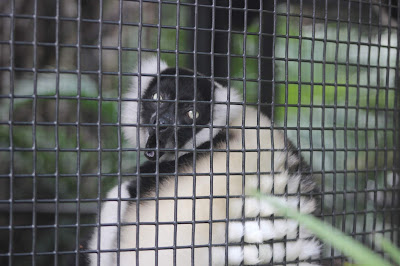 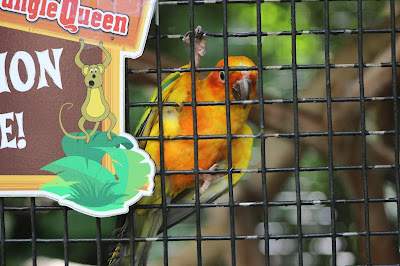 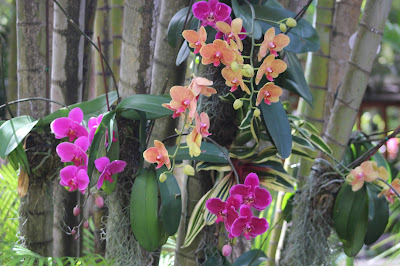 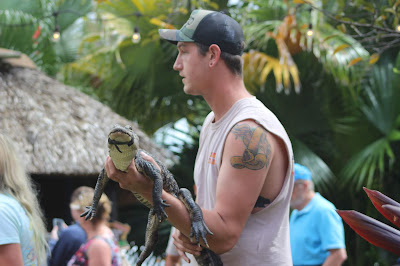 Later the alligator handler came out of the pit to show off this baby alligator.  One could, if so inclined, have a photo taken with it for $5.  the proceeds go to the sanctuary. 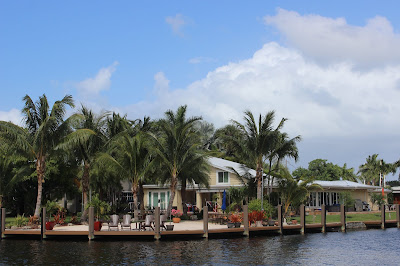 I chose not to do so, instead I purchased my lunch, a simple hot dog and drink and sat watching people feed the peacocks.  Unfortunately they were givings bits of their hamburger or hotdog buns - not likely an appropriate food.

As you likely tell, the weather was sunny while we were on the island.  That held true for most of the return cruise.

I particularly liked the look of this property.  What a lovely spot to sit and watch the marine traffic! 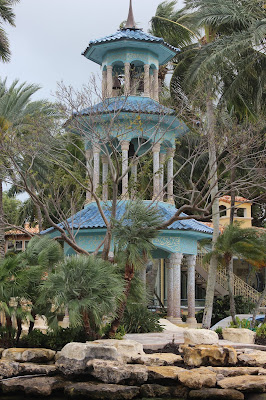 We were told this tower has 24 carat gold on it...I would doubt that as I suspect someone would find a way to steal it.

It was owned (or perhaps is) by an extremely wealthy long time resident of Fort Lauderdale whose name escapes me.  If memory serves, it was part of a large compound containing two large guest houses, a huge shed that purportedly held the lawn mower, and the main house...which was humongous!

Just as we reached the channel where we would turn towards the pier, it began to rain again.  The bridge you see in this photo, I believe is the one at I had pictured in the shots from the cruise ship...just the opposite side. 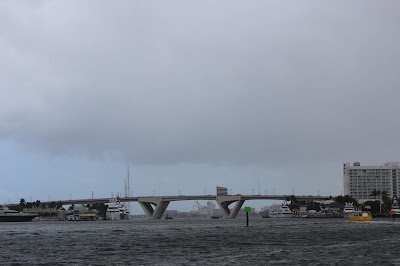 When we reached the pier it was pouring rain, so I got drenched once again as I walked back to the hotel.  After changing clothes, I hung the wet items to dry in front of the a/c unit.  It was still raining so I read for a hour or so before I went to dinner in the hotel.  I didn't want to walk the 20 minutes in the weather again.

As I was waiting for my dinner, a couple were looking for a table, and as I was at a four top, I offered to share.  We had a wonderful chat (though I've forgotten their names already) as they were sailing the following day.  They had driven from Galveston, Texas, a few days prior and had spent some time with family in another part of Florida before making their way to Fort Lauderdale for their cruise.

The rest of the evening I spent repacking the suitcase and carry-on.  I needed an early night because I had to head to the airport by 4:30 in the morning for my 7 a.m. flight to Toronto.  After a 3 1/2 layover in TO, I was on my home to Regina arriving at 3:30 p.m. local time.  It felt good to be home, and best of all there was very little snow left!

So ends my final journey for this year (at least at this point I have nothing else planned).  It was another wonderful trip, filled with fun experiences and great people.

Hope you've enjoyed the photos and stories.  I'll be back soon with an update on the preparations underway to get the house ready for sale...and all the other boring stuff that happens in my average life.  Have a great day everyone!